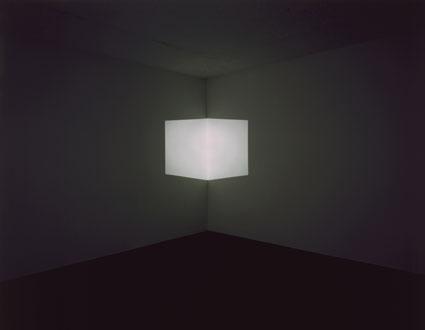 Every year, LACMA hosts the Collector's Committee, a group of donors who join together to purchase a handful of objects on our curators' wish lists. The artworks up for acquisition are installed for the committee's review; for fun, we staffers get an early look and cast our own ballots ranking favorites. This year, I was the first person in the galleries. I don't know what I was more excited about—the prospect of basking in James Turrell's Afrum (White) or the chance to opine on it. You see, I am a Light and Space Fiend. In fact, I even created a Facebook page to celebrate my love. You can thus imagine my jubilance to find that the Turrell made the cut. 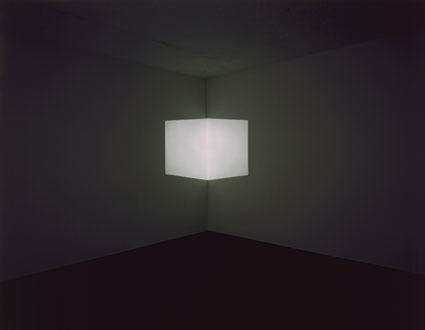 I'm interested in the way Afrum, as with other Light and Space objects, challenges viewers' perceptions. What appears to be a floating cube is actually projection magic—simply, elegantly, powerfully, a light on the wall. The artist once said, "In working with light, what is really important to me is to create an experience of wordless thought, to make the quality and sensation of light itself really quite tactile." That quote leaves me almost as breathless as the object itself. The provenance is an added bonus. Afrum's original owner was a Torrance, CA-based aerospace scientist with whom Turrell and Robert Irwin worked from 1968-71 on LACMA's Art and Technology exhibition. If you don't know about that pioneering show, check in tomorrow to learn about the unusual collaborations that emerged as a result, as well as the delightfully candid accompanying catalogue.