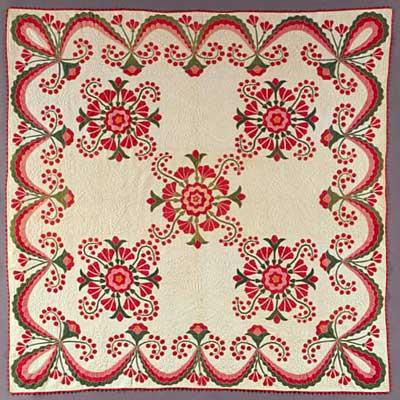 I was stopped in my tracks when I saw the latest installation in the quilt case in the American galleries. The nineteenth-century quilt now on view is astonishingly beautiful and technically amazing—a mesmerizing combination of quilted, embroidered, appliquéd, and stuffed cotton. The red, pink, and green swag border, large floral designs (the "Rose of Sharon"), with their marvelous arabesques of green stems with big red berries, contrast brightly with the patriotic, star, and flower motifs quilted into a background of white squares featuring a variation on the Great Seal of the United States. These all-white dimensional designs are magnificently visible in the raking light of the display case. And the whole quilt stands out dramatically against the gallery's crimson walls. The title is equally eye catching: Buchanan's Banner with "Rose of Sharon." 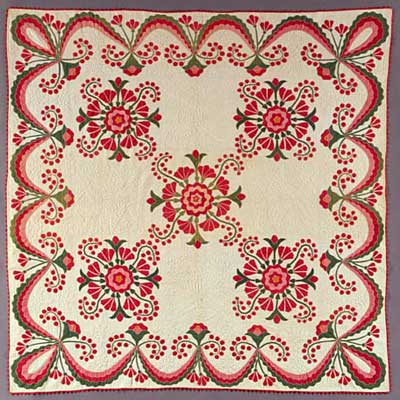 Buchanan's Banner was made in 1857 by two sisters, Margaret and Gillian P. Wright, from Monroe County, Missouri, to celebrate the election of James Buchanan as fifteenth President of the United States (1857-61). The quilt begs close examination to discover all its superb details, such as the raised drum and drumsticks and "liberty" banner included with each of the four Great Seal representations that symbolically flank the central "Rose of Sharon" variation like north, south, east, and west cardinal directions. There is an exuberant blossoming energy to the entire design and masterful execution that ironically is at odds with Buchanan's legacy—his failure to prevent the Civil War. History aside, I would love to know if President-Elect Barack Obama's upcoming inauguration is inspiring any new American quilts of such extraordinary quality.