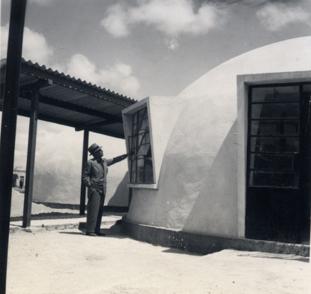 Tuesday's article in the Los Angeles Times about the city's SurveyLA program, which is looking for "hidden gems" of architecture around L.A. in need of preservation, resonated with me after seeing L.A. artist Steve Roden give a talk at last week's Postopolis series, sponsored by the Storefront for Art and Architecture and For Your Art.

Roden, whose work is in LACMA's collection—you might have noticed his name in the list of AHAN acquisitions in yesterday's post—spoke at first about his paintings, sculptures, and sound works, but midway through he took a left turn and gave a slideshow of rare photographs he'd just acquired which detailed the strange architecture of Wallace Neff. (A more thorough rundown of his talk can be found at City of Sound.)

"Strange architecture of Wallace Neff" may seem an outlandish thing to say; he's best known for the Spanish-style homes he built in the 1920s and '30s around Los Angeles for stars like Mary Pickford and Douglas Fairbanks Jr. But Roden, whose work often engages directly with architecture, has spent the last ten years researching the period of Neff's career in which the architect became obsessed with what he called airform architecture—domed structures created by inflating a massive balloon, then covering it in a concrete shell. The result is more tactile than, say, Buckminster Fuller's geodesic domes (designed about a decade later); Roden describes their look and feel "as if someone hand-made a ceramic bowl, then flipped it over." 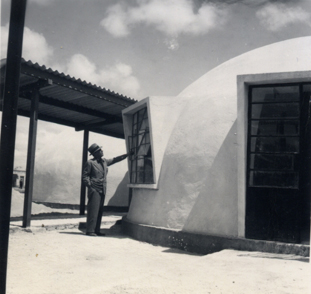 As Roden noted in his talk, this period in Neff's career is often looked at as blemish, a brief foray off the rails. The recent Neff monograph gives only a cursory nod to these works. But the truth is that Neff regarded his airforms as his most important work. Commissioned by the War Department in the 1940s, Neff built these structures in Virginia, Arizona, and California—as well as in South America, India, and Africa. Of the airforms built in California, only one still stands, in Pasadena. (It might not surprise you to know that Roden lives in it.)

The photographs Roden unearthed—detailed by the artist in a recent post at his site (including some hilarious back story relayed in the comments section)—include photos of construction crews inflating the balloons and building the houses and "testing" the structures' durability by smashing mallets against the wall. Roden has only posted a few of the photos so far, but promises to share some more in the future.