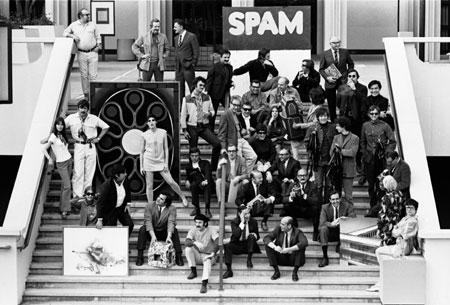 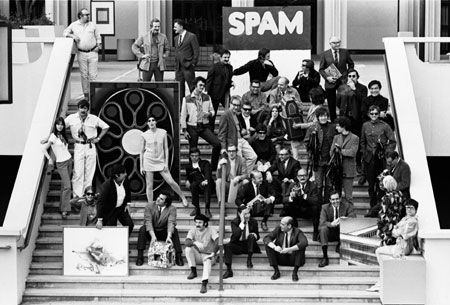 I love this photo. It was taken in February 1968 and features forty-five artists gathered on LACMA’s steps—many with artworks in hand—for a “family portrait” of sorts. Ed Ruscha, Robert Irwin, Frank Gehry, Judy Chicago, Billy Al Bengston, Penny Little, Claes Oldenberg, and many others dropped in for the photo op (as full a list as we can come up with is after the jump). The occasion was to document, for posterity, an exhibition of Los Angeles County artists’ works that was to go on view in Sacramento’s capitol building later that summer. The artists come from a variety of fields—painting, sculpture, architecture, fashion, film, graphic design, etc.

I first came across this picture when I flipped through the book LACMA published on the occasion of BCAM’s opening last year. Then I came across it again the other day when some research I was doing brought me to some old press clippings from 1968. From articles in the Los Angeles Times and the Santa Monica Evening Outlook, I gather it was a pretty swell party, with hors d’oeuvres and hard liquor in supply just off camera.

Each of these articles describe what seem to have been the two major stories of the party. First, the mod woman licking her lips and staring straight into the camera like the scene-stealer she knows she is. As the author of the Evening Outlook article described, “I looked her right in the eye and asked her name. ‘Leon Bing,’ she answered, ‘from San Francisco. Aren’t you going to ask my opinion on the war or something?’”

It was her forward attitude and, even more so, that strip of clear plastic running down the center of her “shocking pink” mini-skirt, that had the reporters’ tongues wagging. As it should have, since that’s why she was there. For in fact, she wasn’t an artist but a model, wearing the latest design by Rudi Gernreich (seated next to her in the jacket with the oversized zippers).

The look on Gernreich’s face essentially illustrates the other common theme of the day—the dueling disinterest of all involved vs. their desire to have their fabulousness documented. As noted by the Los Angeles Times’ Art Seidenbaum—who actually appears in the photo, I’m told, though I couldn’t tell you which is him—“On the plaza, a show of mixed emotions. Each artist seemed torn between the desire to be photographed and the need to prove he didn’t want the publicity.” Of the forty-five people in the picture, I count eleven who actually looked toward the camera when the photographer shouted “smile.”

We’ve come up with thirty of the forty-five people on the steps. If you recognize anyone else, let us know! The full list, in alphabetical order, after the jump.