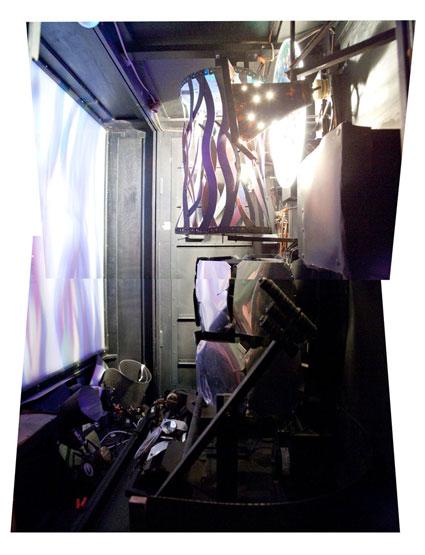 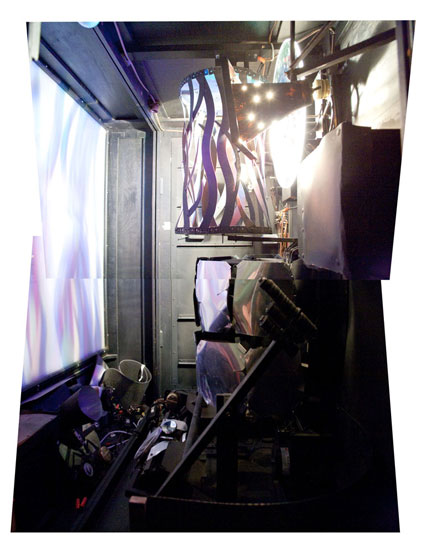 “He created a device he called a “color organ,” which he used to “orchestrate” the qualities of light. Where a composer might play with key, melody, or tone, Wilfred composed reflection, refraction, and color. The work is embedded into a wall by a staircase leading up to the European galleries, with a few comfy chairs in place so one can settle in and watch the soundless composition unfold.”

One thing that was not mentioned in yesterday’s post about Thomas Wilfred’s endlessly interweaving Lumia composition of colored light is the inconspicuous door slightly to the right of the screen on which the composition plays. One might ask, if they can possibly take their eyes off the hypnotic undulations on screen, “I wonder what’s back there?” That’s exactly what artist and head of the photography concentration in the Department of Art at UCLA, James Welling, asked LACMA. And earlier this week, Welling, along with some students from his theory class on color, found out—when LACMA electrician Roosevelt Simpson opened the door.

The last Lumia device ever made by Thomas Wilfred, Luccata, Opus 162, 1967-68, is one of approximately 35 of the devices left in existence. The piece is on loan to LACMA by former radio astronomer Eugene Epstein and his wife Carol. Epstein happened upon a Wilfred work called Vertical Sequence II, Opus 137, 1947, at the Museum of Modern Art in 1960. According to an article in the alumni quarterly of Caltech, Epstein’s undergraduate alma mater, Epstein explains, “When I turned the corner and saw this work, it blew me away, I thought, ‘Wow! Where has this been all my life?’ I watched so long that I ended up sitting on the floor. It was captivating.” (Caltech News, Volume 39, issue 3) He’s been collecting works by Wilfred ever since. Epstein has learned how to care for and restore the devices and has stocked up on various particular types of contemporaneously made light bulbs that Wilfred intended to illuminate his works.

So, what’s inside? Well! Roosevelt unlocked the door and there stands a large cabinet, approximately 51 inches high and wide, and 42 inches deep. A single electrical cord connects the device to normal 120-volt household current. Inside the cabinet is the magic: Two 500-watt incandescent bulbs make for the sources of the light, which seeps through a tangle of hand-crafted parts—colored glass, gelatin, strips and punched metal—some rotating in slow motion, and some static.

Welling and his students were pleased. The contraption was indeed fascinating. Wilfred, in his article “Light and the Artist” in the June, 1947 issue of the Journal of Aesthetics & Art Criticism, wrote, “My own experiments began in May in 1905 in Copenhagen with a cigar box, a small incandescent lamp and some pieces of colored glass.” I’m sure that creation was beautiful too.