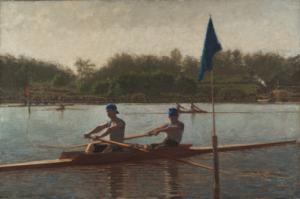 Many of our cherished memories are made from sweat and fun at some sport or another.  So there’s a visceral reaction to Manly Pursuits: The Sporting Images of Thomas Eakins and Catherine Opie: Figure and Landscape. And, although many of us may not have known the bullfighting sport in Picasso and la Tauromaquia, a small installation in the Ahmanson Building, it too recalls the “passion” in which these activities reside in the times, the culture, and us. 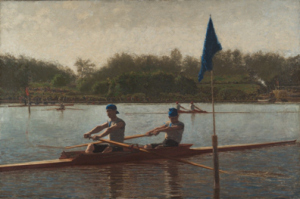 Although Eakins’s youth sits squarely at the end of the Civil War, he remains stoically and single-mindedly an artist of his middle-class, privileged background. The sports of his paintings are the sports of his class. In the artist’s sometimes precise and evocative paintings, with their late Renaissance references and a palette of moody color that paid attention to the pale sunlight yellowing the complexion of his young men, or the sculling in morning haze dulling the sky into slate blue. With a measure of bravery and insolence, and maybe just a touch of social blindness, aided with detailed drawings and Muybridge-style motion photographs, Eakins mounts an artistic and scientific adventure, at considerable cost to himself, into the intimacy and freedom of men and their competitive nature, within a ring or within the great outdoors. Regardless of the possible homoerotic interpretation, we get to witness the blending and contrasting renderings of his sinewy males, thrillingly captured in their sporting life. The novelist J.M. Coetzee, writing about Eakins and his friend, Walt Whitman, could be quoted: “…that democracy was not one of the superficial inventions of the human reason but an aspect of the ever-developing human spirit, rooted in its Eros…” 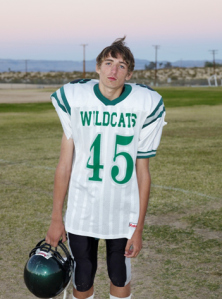 Opie’s world is far more familiar.  Here, among her lithe young men armored up in their padding, could be our own story.  One might expect that these bright modern portraits of high school football players, up close and personal, would achieve a certain intimacy that would defy their generic presence—would open up their world, so to speak. The color, the varying body types, the shapes of their faces, and even their race might offer up that tactile “thereness” that one usually senses in snapshots. Even the boys’ hormonal storms are veiled by a rather sweet charm, while the fury of the game itself lies elsewhere. Opie’s savage eye is also elsewhere, for one senses a new, deep, fastidious, and passionate look at nature and the horizon. As the players fit into that horizon, their true presence is felt—not unlike Eakins’s young men with nature as their background, but essentially different. Opie finds “man” located in the greater Nature. 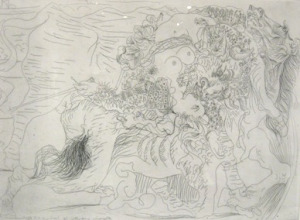 If Eros sits immured in Eakins’s work and veiled in Opie’s, in Picasso’s it is apparently out there, highly personal and in our midst. Picasso might very well be the last impersonator of a mythological god. His beloved avatar, the Minotaur, the bad seed, half god and half bull, we find at the center of this exquisite installation.  Ringed by a series of aqua-tints showing one day of bullfighting, whose almost magical black brushwork leaves one stung by its sheer lightness and the artist’s action-filled touch, is a dense, labyrinthine etching known as Female Bullfighter—The Last Kiss. Out of a mass of short curvy ink strokes, we find the avatar overcoming the female matador and her horse, while her “suit of light” (traje de luces) falls away from her body revealing her nakedness as the bull’s lips press closely to hers. Here Eros is a fully sexual metaphor, the embodiment of nature, the violent game and its wish fulfillment, “the moment of truth,” ironically altered.