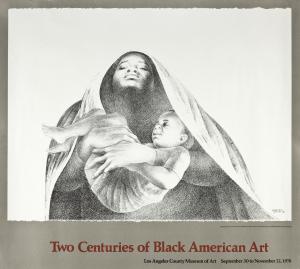 As part of the museum’s ongoing archives program, LACMA is in the process of revisiting a landmark exhibition of African-American art from 1976.  Entitled Two Centuries of Black American Art, this seminal show is acknowledged as the first comprehensive museum exhibition of African American Art.  My department has been busy describing, documenting, and digitizing key details about this exhibition which will be posted on lacma.org as a service to researchers and the public. 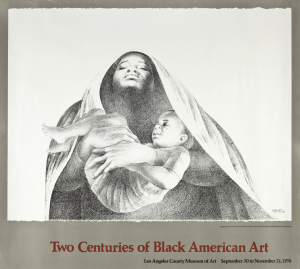 
Although the importance of organizing such an exhibition seems like a no-brainer in retrospect, the bitter truth is that it wouldn’t have happened without pressure from three committed trustees—Franklin Murphy, Sidney Brody and Robert Wilson.  In researching the exhibition, it has been a pleasure working with Wilson, who served on LACMA’s board from 1974 to 1985 and was in fact one of LACMA’s first African American trustees.  Recently we visited Robert in his Hollywood Hills home where he generously loaded us down with information and treasures from his personal archives—pamphlets, exhibition promotions, newspaper reviews, and a rare poster.  “I remember the impact this show had in making LACMA a place where the black community knew it was welcome,” he told me. 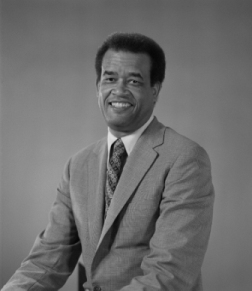 Robert recounted how the exhibition opened with the customary party on LACMA’s plaza but, meanwhile, the exhibition sponsor Phillip Morris threw a more exclusive dinner across the street including artists, lenders as well as Artie Shaw—with Armand Hammer requesting an invitation!  (Phillip Morris, Artie Shaw, and Armand Hammer—three blasts from the past!)  An essay by Robert documenting the show’s origins will be a part of the upcoming web project.  It is an important first-hand account of a watershed era in black historiography. We’ll let you know here on Unframed when the project is complete. Our many thanks to the indefatigable Robert for contributing his vivid recollections, resources, and enthusiasm.