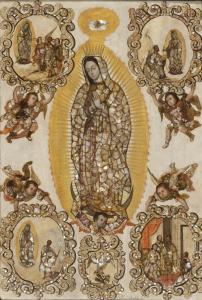 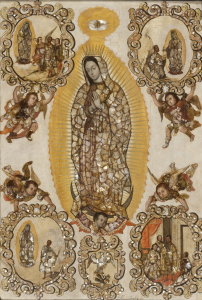 We just added a new image of the famous Virgin of Guadalupe to our growing collection of Spanish colonial art—this time made with inlaid fragments of shell that make the work look almost otherworldly. Inspired by Asian decorative arts, this special technique was invented in Mexico and is known as enconchado (concha means shell in Spanish). Throughout the colonial period there was a significant influx of Asian goods to Mexico via the legendary Manila Galleons that connected the East to the West. The Japanese embassies of 1610 and 1614 to Mexico also contributed to the fashion for Asian-inspired objects. Interestingly, at the beginning of the seventeenth century Japan and New Spain made attempts to formalize trade relations, but the effort was thwarted in part due to Japan’s desire to curtail contact with the West following the country’s unification.

This work is signed by Miguel González, who along with his brother Juan González is considered the foremost painter of enconchados. It depicts the Virgin placed atop an eagle perched on a cactus, Mexico City’s legendary coat of arms. This is a significant detail that points to the rapid Creolization of the cult of the Virgin of Guadalupe in the second half of the seventeenth century, and her increasing association with a local sense of identity. She is surrounded by four roundels depicting her three apparitions to the Indian Juan Diego in 1531, and the moment when Juan Diego unveiled her image imprinted on his tunic before Bishop Juan de Zumárraga (r. 1528–1547); each roundel is supported by an angelic figure that lend a sense of playful dynamism to the composition. 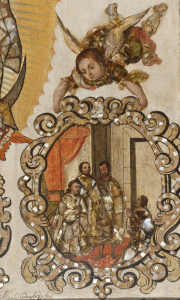 An important element is the work’s elaborate shell-inlaid frame that combines lavish floral motifs with symbols of the Litany of the Virgin.

Enconchado paintings often include ornate frames such as this (inspired on Japanese Nanban lacquer work): they enhanced their preciousness and luminosity and were considered an inherent part of the work. The painting represents the vibrant fusion of Eastern and Western artistic traditions in New Spain.