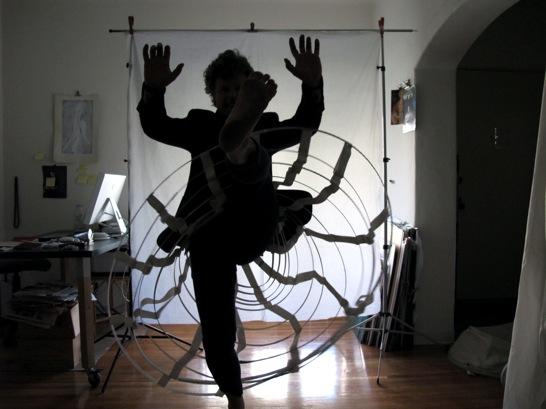 A Dancer Responds to Fashioning Fashion 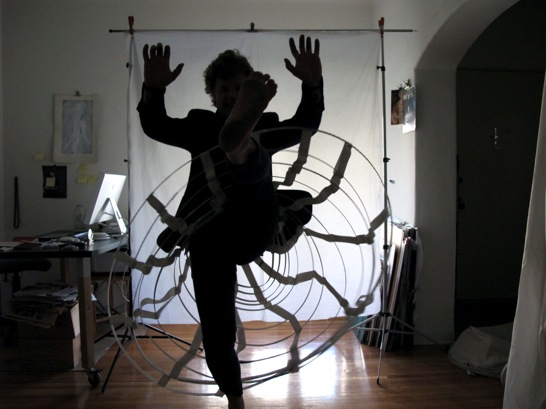 
Jean Claude Wouters, in his studio.

As we bid adieu to Fashioning Fashion: European Dress in Detail, 1700–1915, we have one more noteworthy tribute to the sleeper hit of the Resnick Pavilion inaugural season. Jean Claude Wouters, a dancer and artist—whose wife, a fashion journalist, covered the show for the French press—once took part in a ballet in Brussels in which he wore a crinoline very much like those that give structure to some of the garments in our exhibition. Exhibition curators Sharon Takeda and Kaye Spilker invited Wouters to revisit the crinoline and its relationship to the body in a series of exploratory movements, performed in the Resnick Pavilion and documented here.

Jean Claude talked about the experience:

I performed with a crinoline when I was 24. Thirty years later, you can imagine! The body, everything changed.

The crinoline being round creates a trajectory like that of the orbital lines of the planets. I moved first to the east, then the west, then the north, then the south.

I was blindfolded. I didn’t want for the people to see my face, it is like a mask. I wanted to be like a sign in a space, my body and the crinoline – it’s not about the human expression. At the same time being blindfolded, I had to feel the space with my skin and body. It’s like letting yourself fall into the water, to be totally immersed in the space.

I had two black Japanese pebbles in each hand. The sound you hear is the pebbles. That’s why I make certain gestures with my hands. I was making my own music, through the reverberation of the sound in that huge space of the Resnick Pavilion.

I am no longer a dancer and I do not pretend to be one. It had to be very honest and of course human, clumsy, a normal person in a particular situation. At the same time, it felt daring, being a fifty year-old man, in a crinoline, barefoot in a museum, in front of someone filming. It’s something you would not do! But what is a crinoline, how do you move with a crinoline, impose movement on the crinoline? For sure, I wanted to do something with no thought. If I was one of my friends who is a dancer or choreographer by profession, it would have been organized and well-conceived in advance. Me, I came like a crazy wild madman; I have no craziness in me, but it was this kind of thing, like Antonin Artaud, or like Tatsumi Hijikata (initiator of Japanese butoh).

There is a phrase from Wittgenstein that I like very much – I translate it this way: “The human body is the most accurate image we can have of the human soul.”

I also think of this story: in a colloquium on religion, there was a Shinto priest. An American professor asked him, “But ultimately, what is your theology?” The Shinto priest thought about it for a moment, then said, “I think we don’t have theology; we dance.” Dance is a way of being alive, moving, being aware of your surroundings. We all dance all day in this way.