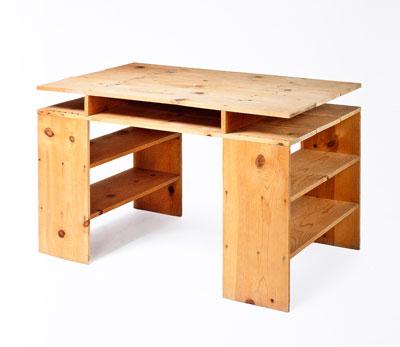 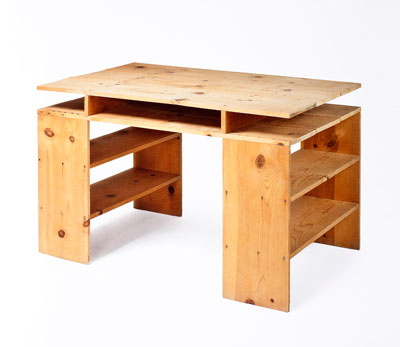 Donald Judd, one of the most significant artists of the latter half of the twentieth century, is often acknowledged as an originator of Minimalism, a style developed in the 1960s and characterized by the extreme reduction of form to simple repeated geometries, free from any historical references or narrative. Judd’s principal preoccupation was form in space, which, in “Specific Objects”, an eponymous essay of 1965, he called work that was “neither painting nor sculpture” but “challenges both.” As early as the mid-1960s, Judd demonstrated his belief that the space surrounding his work was equally essential to the viewer’s experience, carefully installing his own art (and that of others) in his home in New York. By the mid-1970s Judd included the design of architecture, furniture, and ceramics in his artistic practice.

This conviction led to a project of enormous ambition—the adaptive reuse of historic buildings (former industrial and army facilities as well as commercial and residential structures) in Marfa, a small town in the West Texas desert. There, from the 1970s until his death in 1994, Judd converted largely abandoned and unused buildings into living spaces, studios, and museum galleries for his own art as well as the art of several of his colleagues. His first major project was to convert a city block with two airplane hangers into a studio and residence for himself and his two young children. Unable to find furniture locally that suited his architecture, he decided to make his own, beginning in 1978 with beds and a pair of desks for his daughter and son.

The design of the prototype desk (this example made for his son, and later put into limited production) relates strongly to the formal logic of Judd's box sculptures. Simple butt-joined pine boards are deliberately arranged and divided in regular measures by planes in the form of shelves, legs, and a desktop. The desk, with its repetition of planes and divisions, delineates space in a complex rhythm of surfaces and edges. Its open shelves (instead of drawers) a reflection of Judd’s commitment to visual transparency, the desk is one of the very few pieces made by the artist himself.

Two years earlier, Judd had made a series of fifteen plywood boxes of equal exterior dimension, each varied in open, closed, and divided interior volumes. (These boxes are now a centerpiece of the Dia Art Foundation collection.) One example from the series features a lifted top plane echoing the floating double planes of the desktop. The plywood boxes became the prototypes for Judd's monumental series of 100 milled-aluminum boxes in the two former artillery sheds at Marfa he modified to house them—a virtual symphony of Euclidian geometry and an ideal symbiosis between art and architecture, space and light. As one ensemble, the building and the sculptures comprise the masterpiece of Judd's oeuvre.

The prototype desk became a starting point for a whole series of indoor and outdoor furniture. Judd's ideas about the integral relationship between art and architecture extend the principals of the Gesamtkunstwerk (total design unity) of the late nineteenth and early twentieth century Arts and Crafts movement. Judd  admired the movement and shared its goal to integrate art and life. With the acquisition of this rare desk, LACMA can now display a work seminal to Judd’s critically influential philosophy about the nature of art and design.