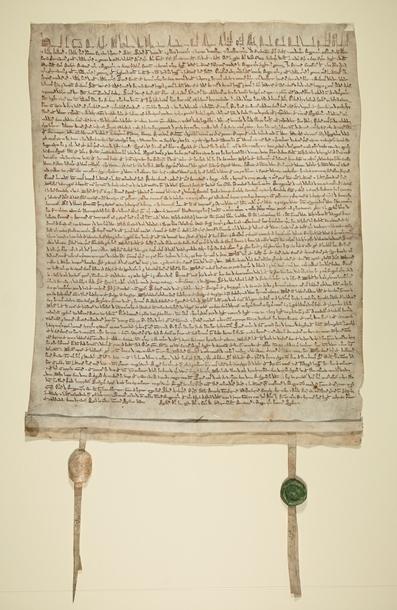 A Closer Look at the Great Charter

Drafted nearly 800 years ago, Magna Carta subjected the king of England’s authority to the rule of law and asserted important individual rights. The historic significance of the Great Charter has been characterized in superlative terms, often described as one of the most important legal documents in the history of democracy. Through the centuries, various nations have invoked the principles embodied in Magna Carta—yet very few of those inspired by its contents ever set eyes on an actual document.  Starting today, LACMA is hosting a ten-day public presentation of an original manuscript of Magna Carta as part of BritWeek. 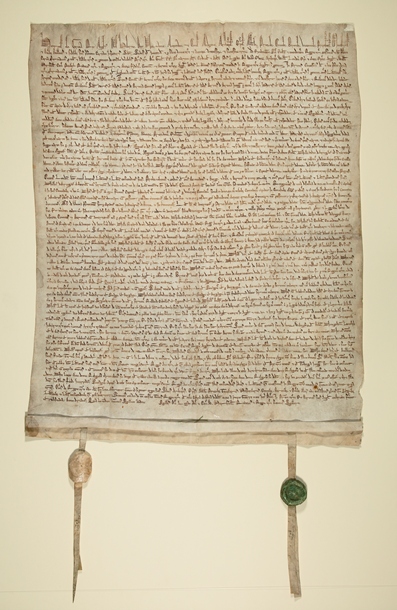 
Magna Carta, Issue of November 1217: the original charter sent from King Henry III to the county of Gloucestershire. Bodleian Library, University of Oxford

First granted by King John in 1215, Magna Carta was subsequently reissued five times throughout the century during the successive reigns of Henry III and Edward I. Written close to two centuries before Gutenberg’s invention of movable type, these different issues of Magna Carta were officially transcribed by hand, or “engrossed,” and dispatched to county courts to spread the terms of the new agreement throughout England. Since such manuscript transcriptions of the multiple issues of Magna Carta were prepared for each county court, hundreds of engrossments would have been executed over the course of the thirteenth century. Of these, a mere seventeen are known today. The document on view at LACMA is a manuscript of the 1217 Magna Carta, issued by Henry III.

For all of its celebrated history and remarkable rarity, at first sighting the document itself may appear rather modest in scale. It is written on a single parchment in a dark brown ink, likely made from oak tree gallnut growths, with minimal decorative flourish. Prior to the widespread availability of paper in the fifteenth century, parchment or vellum made from the skin of such animals as calf, sheep, or goat was used as a writing support. Preparation of parchment required stretching, scraping, treating and drying the animal skin. The size of this document on parchment is therefore bounded by the size of the animal (in this case sheep or goat). The 56 lines of Latin text, carefully laid out in a chancery script on the “flesh side” of the parchment, are in heavily abbreviated form to economize space and accommodate the lengthy text—running close to 2,500 words—onto the small surface. The seals at the foot of the document are those of the two guardians of the ten-year-old Henry III, himself too young for his own seal. The document is preserved in excellent condition, the text quite clearly legible to those proficient in this Medieval legal Latin, with only very minor losses at the bottom right edge of the parchment (among suspected culprits of this damage are mice).

Even at the Bodleian Library in Oxford, where the document is conserved, Magna Carta is not on regular public display. Indeed, this is a rare chance to scrutinize closely the document’s small script and consider the great impact of its words.