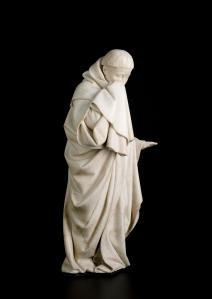 The Mourners: Tomb Sculptures from the Court of Burgundy just opened last weekend. The installation is beautiful, with spotlit alabaster figures set on a platform in a dramatic darkened gallery. The figures are not commonly seen in such a minimalist setting; they come from the lower register of the elaborate tomb of John the Fearless, one of the powerful 15th century dukes of Burgundy. The tomb is now a centerpiece of the Musee des Beaux-Arts de Dijon. The gallery that houses it is being renovated, so the figures have been on the road for over a year. Isolated as discrete works of art, the sculptures (each about sixteen inches high) stand out like miniature portraits of distinct personalities who retain their individuality despite the passage of more than five and a half centuries.

Each figure is captured in an apparently spontaneous posture of grief. Some wipe their tears, while others bow their heads, sing, or wring their hands. 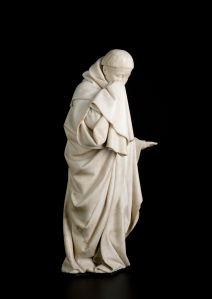 They are so detailed that even those who appear to hide under their cloaks have finely carved facial features if you bend down and peek under their hoods. 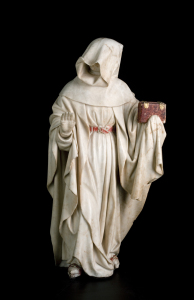 The French Regional American Museum Exchange (FRAME) has produced an extraordinary online collection of photographs of the mourners. Before the figures were transported to the US for exhibition, they were documented in more than 14,000 high res and stereo 3D photographs. Mourner no. 64 is my favorite, caught in a very personal gesture, pinching his nose as if to stop his tears. You can view the images full screen, zoom, rotate them, and select various angles.

Curator J. Patrice Marandel talks about the poignant humor of the mourners, the artists who carved them, and the installation at LACMA: