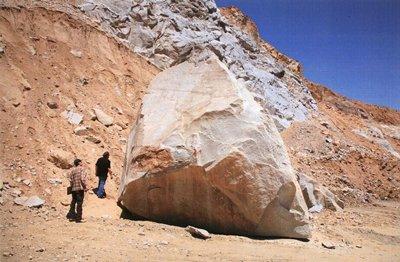 As you may have read in Sunday’s Los Angeles Times, we’ve got a new major artwork on its way to LACMA—Michael Heizer’s Levitated Mass. We are beginning prep work for its installation this month and it will make its official debut on campus in November.

So, what is it? The short if incomplete answer is it’s a 340-ton, 21’-6” high boulder that Heizer discovered in a quarry in Riverside some years back. (In terms of height, the boulder is roughly as tall as the Resnick Pavilion. It’s big.) 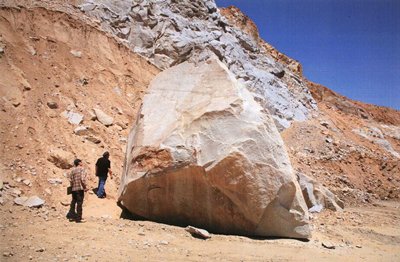 
The boulder in its quarry

But that’s not all it is—the boulder is just the most prominent feature of Heizer’s latest earthwork. It will be installed above a 456-foot-long trench that stretches behind the Resnick Pavilion. You’ll walk the length of the trench, which eventually descends to fifteen feet underneath the boulder before rising back to ground level on the other side. It promises to be quite an experience. “Awesome” is the word that springs to mind. To give you an idea of the experience, you can see in this aerial view of the campus a path that already exists behind the Resnick Pavilion—this is roughly the length of the trench we’ll begin cutting into the earth this month. 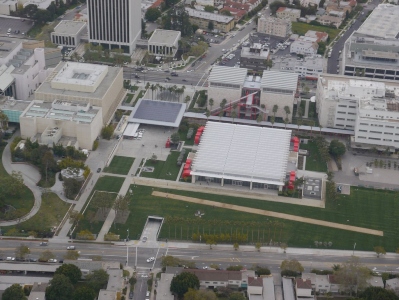 Last month our own Michael Govan went out to visit the boulder—in the video below he gives you an idea of what you can expect.