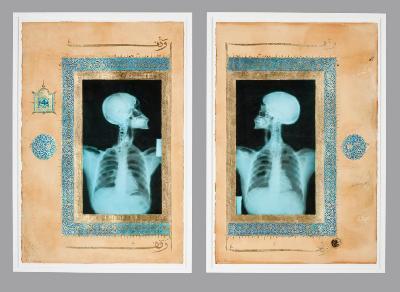 Artist Interpretations in Gifts of the Sultan, Part II: Q&A with Ahmed Mater

On view through September 5, Gifts of the Sultan: The Arts of Giving at the Islamic Courts explores Islamic art through the universal tradition of gift giving. The exhibition features more than 200 works of art from three different continents and spanning the eighth through nineteenth centuries. The exhibition also features the work of three contemporary artists, all with roots in the Islamic world—Sadegh Tirafkan, Ahmed Mater, and Shahzia Sikander—commissioned to interpret the art of gift-giving in Islam. Exclusively on Unframed this week, arts writer and founder of Art Middle East Nazy Nazhand interviews each of these artists about their contributions to the exhibition. Read yesterday's interview with Sadegh Tirafkan here. 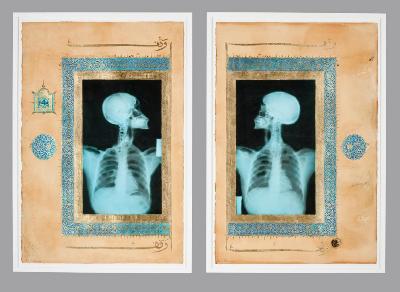 Ahmed Mater, from Abha, Saudi Arabia, is both an artist and a practicing physician. In his Illumination series, to which this beautiful diptych belongs, Mater draws inspiration from the Islamic arts of the book, in particular manuscripts of the Qur’an, whose pages were decorated with illuminated borders, headings, and verse markers. At the top and bottom of each panel, he inscribes the word waqf, a notation often found in manuscripts of the Qur’an, which designates a charitable donation. Mater radically magnifies his illuminated page, generally a small scale and intimate art form, creating instead a new sense of intimacy by using his pages to frame human X-rays.

How does your work relate to the Islamic artistic tradition represented in Gifts of the Sultan? How has traditional art influenced your practice?

I am from Saudi Arabia, the country that is the custodian of the two holy cities in Islam, Makkah and Medinah, and so I have grown up amongst very strong faith and spirituality. One of my earliest and well-known bodies of work was the Illuminations series where I combined my modern life as a doctor with a strong sense of objectivity, and my spiritual and subjective atmosphere, resulting in what appears to be traditional Islamic manuscripts with X-Rays in the middle. The way I have treated the paper and the decorative illuminated borders and calligraphy are part of a traditional Islamic art practice which has always influenced my work.

What are your thoughts on museum exhibitions like Gifts of the Sultan that juxtapose historical and contemporary artworks?

I think it is brilliant. I love that historical works can relate to contemporary ideas. It shows how much we can learn and develop from our cultural heritage and apply that in a cutting-edge and contemporary way that is accessible to an international world.

Where are you currently based? One of the major themes in Gifts of the Sultan is that of cross-cultural interaction and exchange; what are your thoughts on this theme and how does the geographical location of where you work influence your perspective?

I am based in Abha, the capital of Aseer. I have lived in Saudi all my life. Most of my ideas are rooted in my cultural influences and living in Saudi has such a big effect on my work. I am much more connected to what I am producing being based here. However, I want my work to be accessible for an international audience and have them learn something new about a culture that they probably know very little about. I capture art from the story of my life, I don't know any other way.

I do not have one set creative process. I am often thinking about an idea, a story or several at the same time. I will think about them for a long time, sometimes years before they materialize into a work of art I will present. I have thought for years about the Cowboy Code, which is one of my most recent bodies of work that I exhibited during this year’s Venice Biennale.

The cowboy was a symbol of freedom and adventure to me as a child, an ideology from the West. I challenge anyone who reads the code not to be impressed. It speaks a universal truth. But in recent times we have forgotten the code in favor of the brand of the ideology. The cowboy code is a set of values, the actual content like a religion. The cowboy of my childhood has been abused, also like a religion, ten commandments or the sharia or the five pillars.

Like my generation, I took a lot from the Western side—our food, our clothes, and our language. And so I wanted to present this code as a way to almost steal it back. It’s a strong side and I want to reclaim it from the politics, or the films, or the media… to give it back to the people. This is what I am currently working on.

Nazy Nazhand is the founder of Art Middle East, a series of programs and cultural events during Armory Arts Week in New York City and Art Platfom – Los Angeles. She’s a contributing writer covering art from the Middle East. She has written for Artnet, Modern Painters, Artinfo, Whitewall, and T Magazine. Follow her: http://blogs.artinfo.com/vanguardism/ and http://twitter.com/#!/NazyNazhand. Additional reporting by Kimia Shahi.