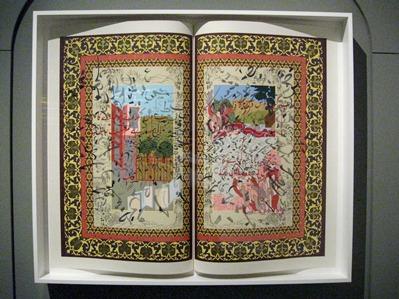 Artist Interpretations in Gifts of the Sultan, Part III: Q&A with Shahzia Sikander

On view through September 5, Gifts of the Sultan: The Arts of Giving at the Islamic Courtsexplores Islamic art through the universal tradition of gift giving. The exhibition features more than 200 works of art from three different continents and spanning the eighth through nineteenth centuries. The exhibition also features the work of three contemporary artists, all with roots in the Islamic world—Sadegh Tirafkan, Ahmed Mater, and Shahzia Sikander—commissioned to interpret the art of gift-giving in Islam. Exclusively on Unframed this week, arts writer and founder of Art Middle East Nazy Nazhand interviews each of these artists about their contributions to the exhibition. Read previous interviews with Sadegh Tirafkan and Ahmed Mater. 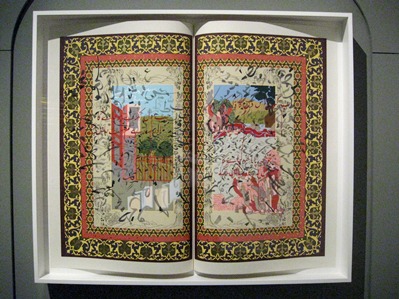 Shahzia Sikander trained in the traditional art of Indo-Persian miniature painting at the National College of Arts, Lahore, Pakistan, and went on to receive an MFA from the Rhode Island School of Design. Representing a fusion of East and West, this piece evokes the art of miniature painting but in an entirely original manner. For example, Sikander plays with scale applying color and text to a large panel to suggest the facing pages of a book. The text inscribed in gold quotes from the opening lines of a verse by the renowned Urdu poet Faiz Ahmed Faiz: “Why talk about the day when the heart will splinter into a thousand pieces, and all sorrows will be ended, when everything we achieved will be lost, when everything we were denied will be granted?” Here, following tradition, the poem is the gift, one both personal and partisan.

How does your work relate to the Islamic artistic tradition represented in Gifts of the Sultan? How has traditional art influenced your practice?

From the very beginning of my artistic practice, my intension was to create a dialogue as well as to explore the viability of an interaction with a traditional genre, and many aspects of my work are the outcome of examining the traditional Indo-Persian miniature paintings.

In 1986, as a student at the National College of Arts in Lahore, I realized that there was an open opportunity in the Miniature Painting Department in that no one was exploring these paintings as a vehicle for contemporary expression, and thus my choice of examining the tradition of book illustration within the context of Indo-Persian miniatures. Because many students were not interested in pursuing this, it became possible for me to explore a new path. Working with the inherent complexities of  “traditional art” was a paradox of choice, allowing me to create an intellectual debate and a new way of asking questions.

What are your thoughts on museum exhibitions like Gifts of the Sultan that juxtapose historical and contemporary artworks?

I would like to see an exhibition where such juxtapositions are the main crux of the show.

Where are you currently based? One of the major themes in Gifts of the Sultan is that of cross-cultural interaction and exchange; what are your thoughts on this theme and how does the geographical location of where you work influence your perspective?

I am based in New York. I also spend several months each year outside of the US working from many other locations. In the recent 4–5 years I have worked in Germany, Italy, Laos, and Pakistan.

The theme of the show is a great parallel to the mobility that many contemporary artists enjoy as well as seek for production of their work.

For me the location from where I work is not necessarily a place of influence. It can be of course, but at times it need not be. The idea explored in the work is what casts the influence or direction.

My recent work is an animation titled The Last Post and a related video titled Gossamer. It was inspired by my ongoing interest in the colonial history of the sub-continent as well as by an opportunity to collaborate with the musician and composer, DuYun, who is also a performance artist.

Nazy Nazhand is the founder of Art Middle East, a series of programs and cultural events during Armory Arts Week in New York City and Art Platfom – Los Angeles. She’s a contributing writer covering art from the Middle East. She has written for Artnet, Modern Painters, Artinfo, Whitewall, and T Magazine. Follow her: http://blogs.artinfo.com/vanguardism/ and http://twitter.com/#!/NazyNazhand. Additional reporting by Kimia Shahi.