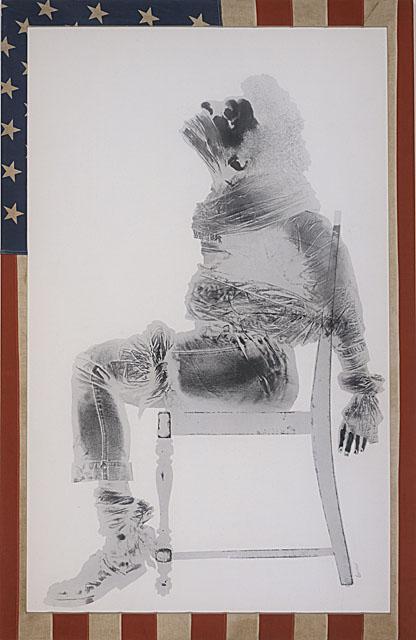 Recently we had the opportunity to add two recent works by David Hammons to our contemporary installation on the 2nd floor of BCAM, on view through August 28. Earlier this year, two early pieces by the seminal artist were showcased in the exhibition Human Nature—Injustice Case (1970) and a small watercolor from 1968. Both pieces were made in Los Angeles at a time when Hammons was questioning the meaning of the American flag and views of that flag appear in both pieces. 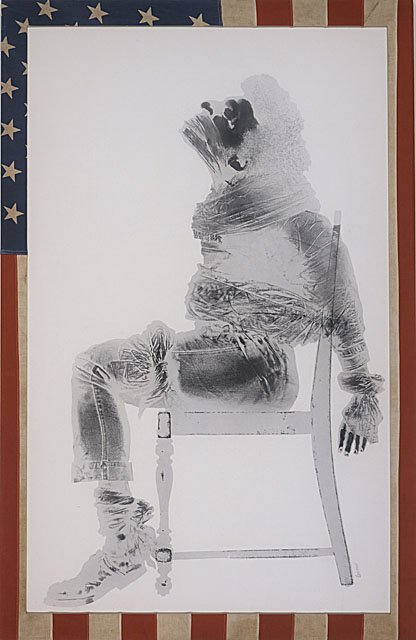 In the same way that a used flag functioned as a found object in Injustice Case, Hammons has consistently sought to make use of found or “poor” materials in his artworks in his days living in Los Angeles after attending Otis Art Institute in the 1960s. Many of Hammons’ artworks of the late 1960s and early 1970s are also created with the easily available means of the body as a paintbrush and grease as paint. Injustice Case is perhaps the most well known of these “body prints.” The image of the contorted and bound figure at the center of the picture appears not to be afforded the ideals of freedom, equality, and justice for all symbolized by the flag that frames the picture. As in much contemporary art created in this time period, this piece specifically relates to a specific event: the trial of Bobby Seale, a co-founder of the Black Panthers who was on trial in the wake of the 1968 Democratic convention, charged with conspiracy. 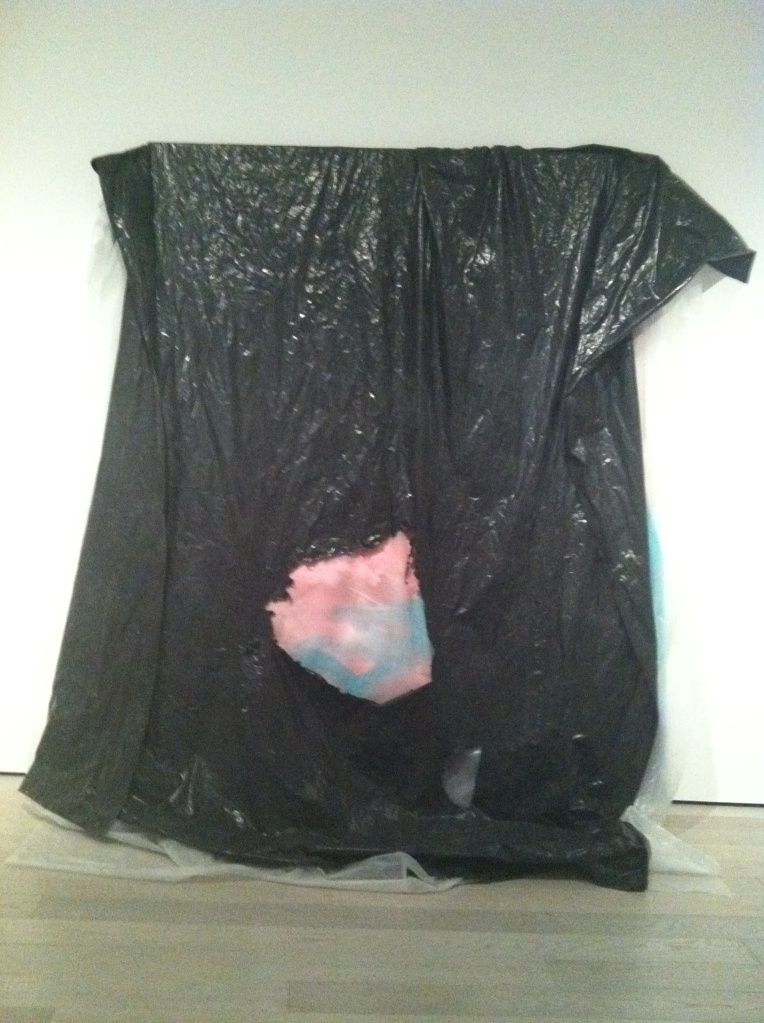 Hammons has also made sculptures out of snowballs, elephant dung, hair collected from barber shops, grease from chicken bones, and even light as a material. His most recent exhibition—last spring at L&M Gallery in New York—featured a series of new works in a painterly mode that he has been working with for the last few years, concealed by found material. Using tarpaulin, cloth rags, and even garbage bags, the artist has partially covered large expressionistic paintings on canvas. In this untitled painting, a circular patch is cut through the plastic, and through that hole a glimpse is to be had of sumptuous, bold primary color brushtrokes that look like cumulus clouds or a big 1970s de Kooning canvas. (Though not as colorful as his later work, de Kooning’s abstract expressionist brushwork and that of his friend Franz Kline can be seen in works in the modern galleries).

Obscuring his work with pieces that are sometimes filled with torn or otherwise crudely devised holes, Hammons makes for a certain camouflage, as if the painting needs to be obscured in order to work its magic and thusly function as an object of beauty, albeit a conceptual one, that is as interested in ideas of beauty as it is in function and stealth utility.

A brick is also used to hold the painting “in place” so that it tilts on a diagonal and the upper right corner reaches higher than the left as the piece is propped up against the wall, rather than “hung” on the wall. That placement—testing the museum’s usual structure of vertically placed paintings—also determines the way in which the found piece drapes and affords the painting another layer of structure and meaning. It is tempting to peel back the draping to get a full view of the colorful canvas surrounded by gray materials. But the whole is grater than the sum of its parts; and to take it in from the given vantage point, stymied in your quest to see Hammons in some traditional painterly light, is the best picture. 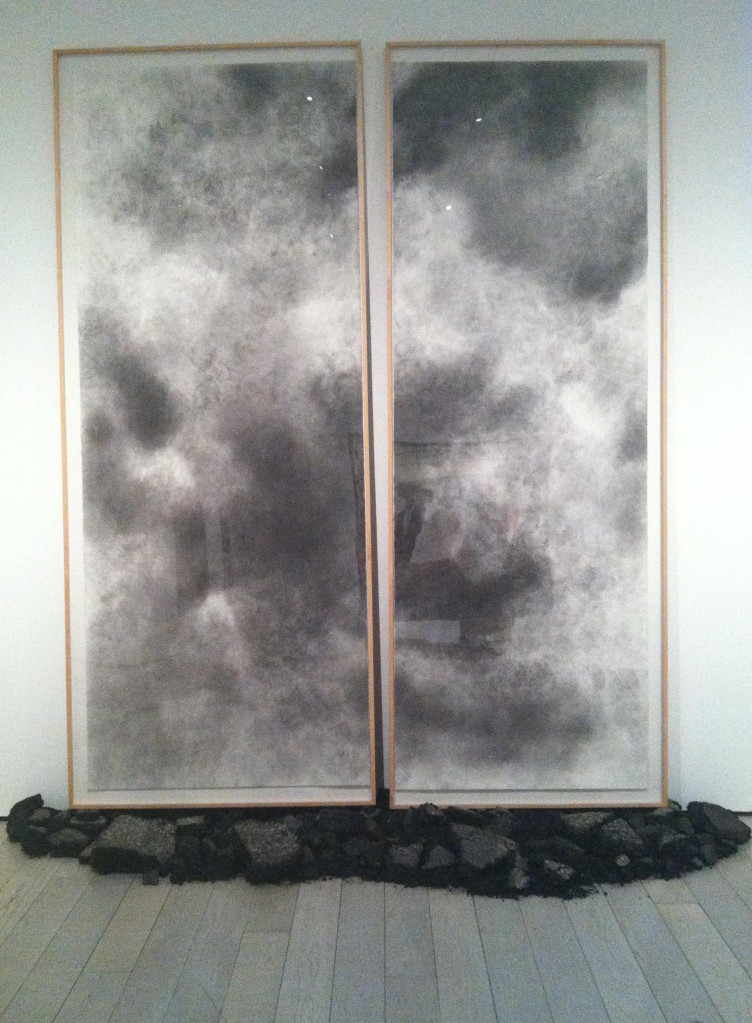 Perhaps even more indebted to the imprint process of his earlier body prints, Untitled (Basketball Drawing) is a classic example of an ongoing series of works on paper. In each instance, the drawing is made by repeatedly impressing a basketball against the surface of the paper. Hammons adeptly handles the ball and the graphite, which leaves the final mark. Parts of the surface are dark and others barely there, as if he wields the chance material with the precision of a finely sharpened pencil.

Hammons has often invoked sport in his artworks—most often boxing and basketball. One work, Three Mikes, contains references to Mike Tyson and Michael Jordan. A whole series of sculptures, Higher Goals, reference basketball hoops extended far beyond their usual regulation height. For this work—one of the largest of his many basketball drawings—the artist has made a diptych of the images on paper. Thousands of basketball imprints create a cloud of seemingly organic forms. Upon closer inspection the lines of the basketball can be made out and here and there the logo of the National Basketball Association. The sport here has been reduced to the repetitive gesture of passing the ball against a wall over and over again. The monotony suggested has parallels with the process of making art day after day but also the rich possibility of practice potentially leading to perfection.