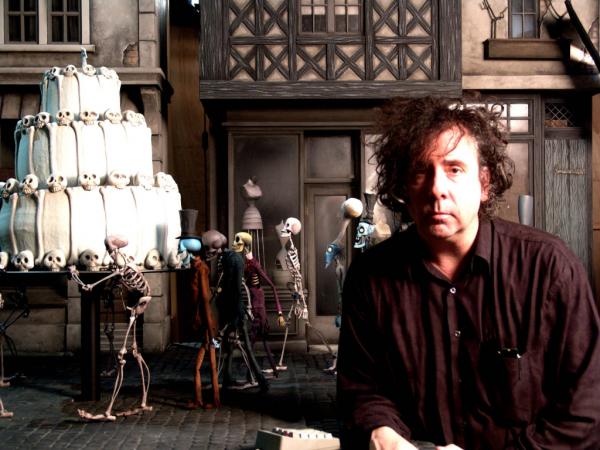 When I learned that Evan Kleiman of KCRW’s Good Food was hosting her annual pie contest at LACMA this year, I immediately began to think about how Tim Burton might inspire the participants. It turns out that food is an integral component in Burton’s art, and I began to wonder just what role it plays.

Halloween is one of Burton’s favorite holidays, and its currency–candy–makes an early appearance in the Tim Burton exhibition currently on view at LACMA. Trick or Treat, an unrealized project from 1980, includes a Candy Monster character drawn by Burton and sculpted by his CalArts classmate Rick Heinrichs. Colorful candy, cookies, and cakes abound in Burton’s version of Hansel and Gretel (1982), as the wicked witch attempts to fatten up a pair of innocent children with high-calorie treats. In his film Corpse Bride (2005), skeletons carry a massive white wedding cake adorned with skeleton heads. 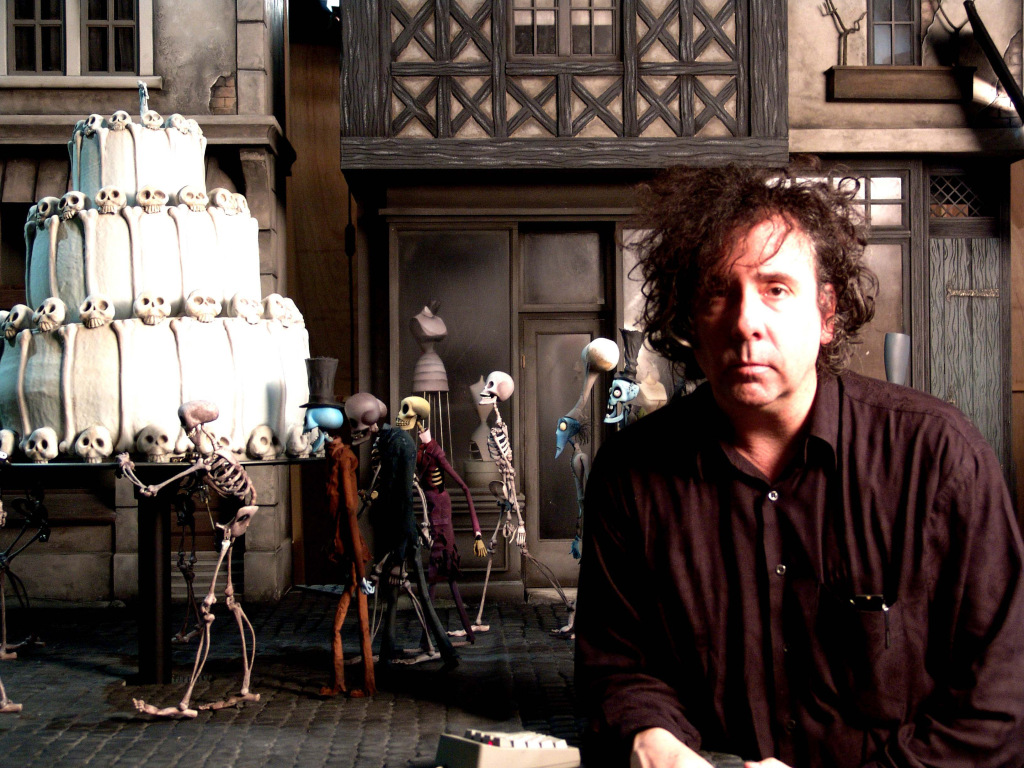 Pee-Wee’s Big Adventure (1985), Burton’s first feature film, shows the eponymous hero paying a visit to the Wheel Inn in Cabazon, California, on the recommendation of Large Marge, a frightening female truck driver who turns out to be a ghost. Probably Pee-Wee felt comforted by the Wheel Inn’s classic diner food, including a range of homemade pies, even though he had to wash dishes in lieu of cash payment.

Food comes to life in a dinner-party scene in Burton’s second feature film, Beetlejuice (1988): in a hilarious reprise of gothic haunted-house scenarios, shrimp cocktails suddenly reach up to grasp the throats of poltergeist-possessed diners, who–to their own astonishment–have just completed a lively dance to the tune of Harry Belafonte’s Banana Boat Song.

Burton grew up in Burbank, and his hometown served as a source for the many send-ups of suburban life seen in his later films.  In the modern fairytale Edward Scissorhands (1990), Burton fondly and humorously depicted the rituals of family mealtimes and backyard barbecues, with their mashed potatoes and ambrosia salads.  Edward–a boy with scissors for hands–experiences some difficulties with peas and carrots, but discovers a talent for chopping and mincing.

Of course, candy plays a starring role in Charlie and the Chocolate Factory (2005), although according to Burton, the real-life chocolate river constructed for the set was none too appetizing by the end of the shoot. Even more gruesome than fermented cocoa are the pies served up by Mrs. Lovett in Sweeney Todd (2007). As the story begins, Mrs. Lovett admits that her shop offers the “worst pies in London”; times are hard, and quality meat simply isn’t available. Then she joins forces with her murderous upstairs neighbor, Sweeney Todd (the Demon Barber of Fleet Street), and his victims become her ingredients. The menu returns from savory to sweet in Alice and Wonderland (2009), in which the Mad Hatter serves scones, jam, and other treats at a very unusual tea party.

As I thought about it, food provided an intriguing new perspective for thinking about Burton’s work. Food in film often represents the appetites and desires of the characters, and perhaps of viewers as well. Many of Burton’s most memorable characters are poised between childhood and adulthood, humor and horror, beauty and grotesquerie. Like everything else in his films, food tends to be both alluring and alarming: brightly colored, larger than life, and liable to bite back.

For the pie contest this Sunday, there is a category for Burton-inspired pies. We'll post the sure-to-be fun entries and winners next week.