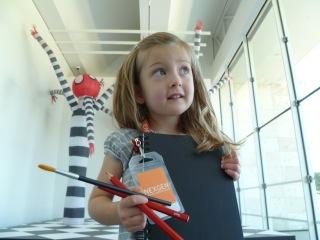 Looking back on the past four months of my Tim Burton experience, it seems as though my fellow gift shop employees and I have seen and heard just about everything. The sheer number of people we encounter on a daily basis can be overwhelming, but fortunately at night, as we close the store, we are able to slow down and reflect. This is the time of day that the public doesn’t experience—when all the chatter has dissipated and the Sleepy Hollow scarecrow looms large in our direction, the only sound being the spooky melody emanating from the diorama of Stain Boy’s suburban home (a tune eerily similar to that of an ice cream truck, which has haunted my dreams now for months. Tim Burton speaks of his fear of clowns. One man’s clown is another man’s ice cream man. Thank you, Danny Elfman).

After speaking to literally thousands of people who have just experienced the Tim Burton exhibition—which closes at the end of this month—I have realized that it is really no coincidence that so many people purchase colored and graphite pencils from the shop (among lots of other items) before they leave.  In fact, the conclusion I’ve drawn (no pun intended) is that it is not so much about the art as it is about the process. Pure creativity is contagious, and this exhibition is like the plague. After viewing it, one immediately wants to return home to draw, to create.

I think part of what makes this show exciting to young artists in this city is that it all seems so, well, immediate—in both time and space. It doesn’t take too much imagination for these kids to see themselves in Tim Burton’s sneakers one day. He was born in the same century as a lot of our NexGen members (free kid’s membership—check it out!), and he grew up right over the hill.  LACMA and Burbank are close enough to see and breathe in the same smog.

In other words, it isn’t impossible for a teenage girl visiting the show today to imagine her own retrospective on the walls of LACMA in forty years: The Childhood Sketches and Doodles of the Great Holographic Filmmaker Tammy Batman, coming in 2051. Needless to say, most of Tammy’s films will also feature Johnny Depp, who, by then, will be enjoying a golden-age career resurgence à la Betty White. 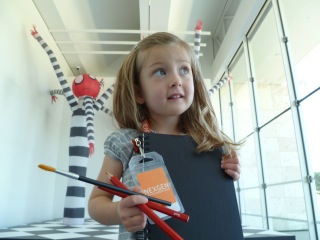 Living in modern-day suburban Los Angeles, these young artists might not see themselves as the next Renoir, or Caravaggio, or Matisse. But what they can envision is being in their bedroom late at night and drawing for fun and imagining that one day they might translate having fun into making a living.

Although a career as a popular artist might not seem so unattainable while strolling through the exhibition, getting to that point requires work, and it’s evident from the show that a creative life is as much about the journey as it is about the end result. An artist’s personal outlet as a child connects with millions down the line because of years of diligence, hard work, and practice, practice, practice. In Tim Burton we see someone who really engaged in what he loved and made a very successful living out of it.

The show reminds us that process is the key. Tim Burton’s early sketches and drawings and models show us that the process can also be art. It’s called a work of art because it’s work. And when it connects with others, it’s magic.