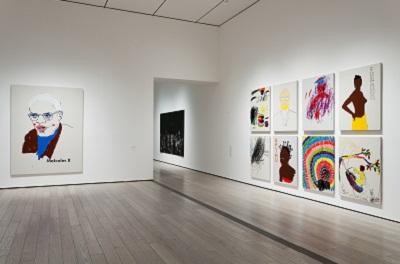 “Past is never dead. It’s not even past.”—William Faulkner

Black-on-black commentary is only slightly an inside story. For under the halo of “Negro Sunshine,” at the entrance to Glenn Ligon: AMERICA, I experienced moments of real cultural nostalgia. My mother and the dream book and the endless numbers racket, with its weird logic and odd asymmetrical poetry, were somehow lodged in Glenn Ligon’s magical series of numbered paintings. Apart from the unusually personal in Ligon’s piercing vision, conceptualism—that somewhat elusive creature—seems to find its most complete expression in his oeuvre. Ligon is prepared to stream unflinchingly through various media, extracting elegantly exquisite beauty swathed in a tireless drama of inventions. Here the iniquities of history are refracted and recast. The heroes and heroines are unknown, enfeebled, and lost in time. Irony is legible and graphic, taking the form of a children’s coloring book. He places specificity within our universal American culture and, in doing so, subjects all of us—black and white—to the same memories, more or less. Ligon's mid-career retrospective directly confronts the not-so-paradoxical complexity of the black male—its frightening history, its Dionysian beauty, its sexuality, its homoeroticism, its fearless honesty, and its dubiously artful texture as America’s existential fall guy. 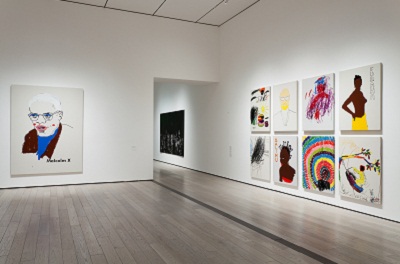 With a litany of literary heroes, Ligon transubstantiates and time travels, morphing in and out of his own modernity. In conceptualist garb, he is prepared to be the captive of the deep and harrowing effect of the “peculiar institution” of slavery and the Fugitive Slave Act. Sensitively exploring the alternate self, Ligon is metaphorically boxed as Henry Boxcar Brown. The Narratives series includes WANTED signs and tales in which Ligon himself is implicated. Somehow we are vicariously the searchers. He signals the debilitating psychodramatic manacles of Jim Crow that so tragically traumatized black consciousness. And yet in his own time—in the post-Stonewall, glamorous, ribald, loose, very gay, and irony-rich era—Ligon painstakingly constructs exquisite, modernist, gestural-infused tablet-like paintings of literary, despairing speech that I might have heard around the kitchen table, as though a refrain that hangs in the air as some haunting vestigial “other.” The mimetic chant, the clipped phrases repeated as unholy utterance like an echo in its stencil form, painted over and over again, resulting in a thick accumulation of oil stick caking downward and blurring to a blackness, a sort of shamanistic ending—black angst as blood memory. Or take the contentious Notes on the Margin of the Black Book, where AIDS, black beauty, and stereotyping vie for the naked truth. Ligon repositions Robert Mapplethorpe’s photos as if to capture the rapidly escaping asteroid of black memory, the increasing velocity of which will be flung from our earthly residence to the outer edges of a black emotional solar system. 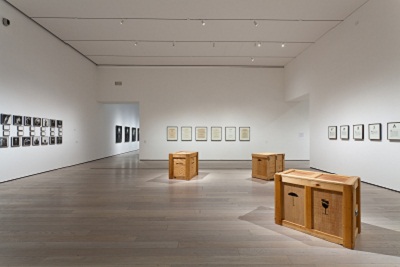 And yet, of course, it’s art. Ligon is foremost a painter. And though his art is replete with those sticky questions of identity that reside in a fragile balance, he filters it through not-entirely-incompatible attractions of modernism and postmodernism, historical racism and a “post-racial” era. Add to that the crosscurrent of homosexuality, which I suggest is the bravest. I sense in Ligon’s work an inherent duality. He mitigates or sidesteps the rage of the hyper-hetero hip-hop gangsta rapper of his generation, who would readily diss the hyper-sexualized males of Notes on the Margin and A Feast of Scraps. The self-deprecation and the perceptual double edge in the brilliantly bold, neon-colored, profanity-rich “dirty talk” paintings of Richard Pryor’s comedy act, with their reference to “faggot,” shows the fearlessness of his art. Rejection and once again attraction, “gays stay home” yields a source of grandness with the dark indelible photo ink-jet images of Million Man March in Screen and Hands, which seem more universal than simply about a black movement. In my opinion, Glenn Ligon’s art achieves greatness for it possesses what throughout the ages was a quality that digs into our very emotional center—spiritual alienation. 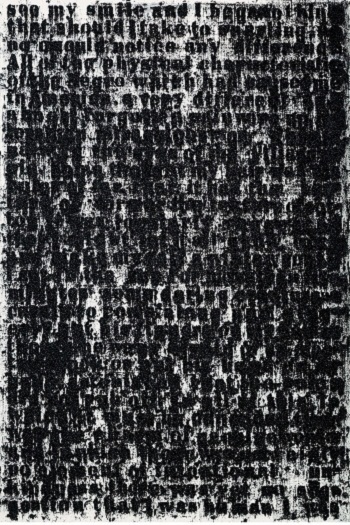 And finally, I was most touched by a painting in the James Baldwin series, Mirror. Here the sparkling coal-dust encrusted night bleeds from the canvas. Its dark beauty, as if seen by candlelight, is faintly revealed a letter at a time. Some are captured, but most are lost. Ligon withholds meaning, the clear narrative. More a form of crystal gazing, I move into the interior of the imagination, a felt impulse where texture, blindness, and reach oblige surrender to the lush inscrutableness, which is so often art.