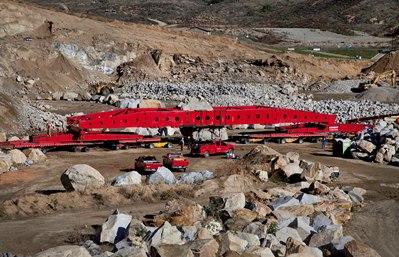 Finally, after much delay, we are happy to announce that the 340-ton megalith that is to be part of Michael Heizer's Levitated Mass will begin its journey to LACMA. (Our thanks go to Hanjin Shipping for generously sponsoring the transportation.) It will start moving this Tuesday, February 28, and will arrive to LACMA (very) early in the morning on Saturday, March 10. 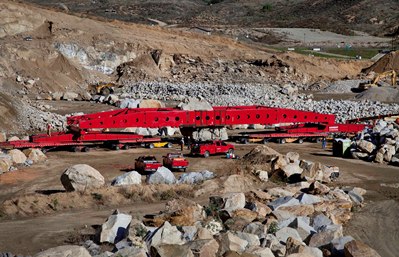 The quarry where the boulder currently resides is in Jurupa Valley, in Riverside County—about 105 miles away if you take I-10. The transporter won't be taking the freeway, however. After months of research, engineering studies, and collaboration with officials in four counties and twenty-two cities, engineers at Emmert International have established a fairly circuitous route that avoids overpasses and any streets or bridges deemed too weak to support the transporter and cargo. You can see the full route here.

The transport will take eleven nights all together, with movement happening only at night—traveling about 8 miles per hour roughly between the hours of 11 pm and 5 am each night. We will be providing updates at lacma.org/levitatedmass as it moves. If you see it pass through your neighborhood, take a picture! Upload it to Facebook and tag us, or post on Twitter (hashtag: #LevitatedMass).

(By the way, while this is possibly the largest megalithic stone moved since ancient times, this is not the first time heavy transport has occurred in Southern California. Just last year Southern California Edison shipped a 350-ton steam generator from the San Onofre nuclear plant to a nuclear-waste disposal site in Utah. A similar transporter was used—400 feet long!—traveling slowly  at night over the course of nineteen days, without incident.) 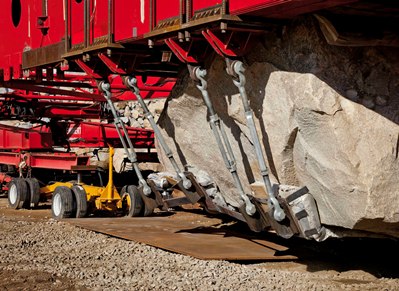 We realize that most of you will not be awake at night to watch the megalith pass by, or perhaps you don’t live within its path. In the event you might want to check it out for yourself, next week we’ll give you a detailed rundown on each of its daily stops.

Once the megalith arrives to LACMA, we will spend the next few weeks installing it over the 456-foot-long slot behind the Resnick Pavilion. The artwork will be ready for public viewing in the late spring/early summer. Stay tuned for further announcements.