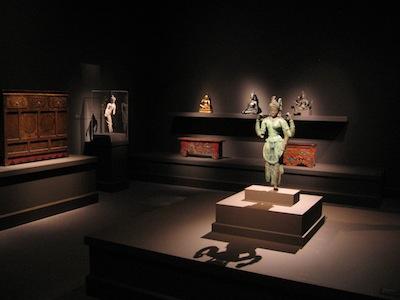 There’s been a lot of movement here at LACMA lately. First, Metropolis II went on view in January. Then, the 105-mile journey of the 340-ton megalith that will be a part of Michael Heizer’s Levitated Mass concluded on March 10. When I want to slow down, I go to the Himalayan galleries, located on the fourth floor of the Ahmanson Building, to look at art from Tibet and Nepal. The most obvious reason is that these galleries are really quiet and beautiful. I also go for personal reasons. I practice meditation in a Tibetan Buddhist tradition. Some of the artwork reminds me of Buddhist teachings I’ve learned. 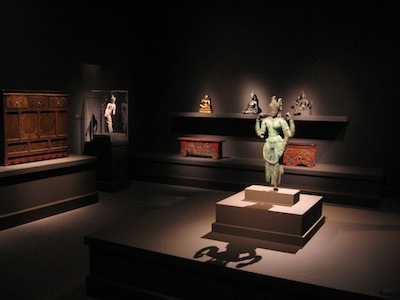 Take a look at the image below of the sculpture of the Buddha Shakyamuni. The first thing I notice when I visit this Buddha is the sweet smile. To me, that smile makes him look very human. There are so many details to look at. Notice that the cloth over his shoulder is incised delicately with a pattern. Look at his hair. You may be able to see a tinge of blue paint. Now look at his body, which is in a traditional meditation posture: seated cross-legged, back straight, gaze downward. He makes two different hand gestures or mudras. His left hand is in the meditation mudra, and the right hand is in touching-the-earth gesture, which is also known as the Buddha’s first moment of enlightenment. 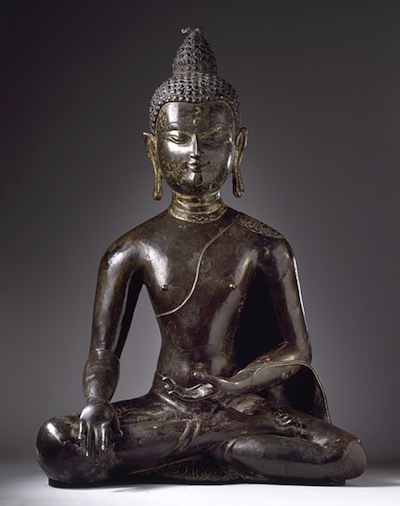 This sculpture would have been part of an altar and a focal point for meditation and ritual. Meditation instructors often say that one of the biggest obstacles to meditating is forgetting the technique. By looking at this sculpture, I remember how to meditate: sit upright, lower my gaze, and focus my attention on my breathing. If you would like to, take a moment while you are reading this to sit like the Buddha. You can do it in your chair, no need to sit on the floor. What do you notice? 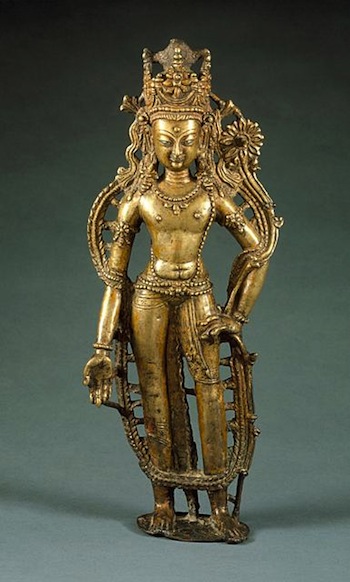 Another one of my favorites in this gallery is this small sculpture of the Bodhisattva Avalokiteshvara. The term bodhisattva refers to a large group of beings who, although they are almost enlightened, choose to be reborn to help followers on the Buddhist path. Avalokiteshvara is associated with compassion. The mudra of the palm facing forward is an indication of giving.

Even though these artworks are not in their original setting, they still evoke contemplation and stillness.

1 comment
Rhona_Lebner says:
I,too,find incredible peace and tranquility in the faces and expressions of the Buddha and Avelokiteshvara. That such peace is truly attainable motivates me to follow the path of the Buddha to strive for loving kindness and compassion, as do you my dear friend.