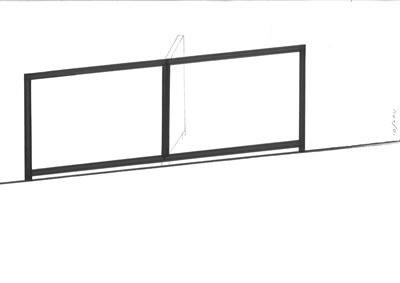 Since opening last fall, Maria Nordman FILMROOM SMOKE 1967–Present continues to evolve to include other works by the artist—YANG NA, 2011–Present and a cabinet of two-sided drawings, PUBLIC SQUARE and GROUND OWL GROUND SQUIRREL PARK, previously on view in MOCA’s exhibition Under the Big Black Sun. LACMA's exhibition is on view through May 20 in the Art of the Americas Building and the adjacent plaza. Nordman plans to be on campus, near the exhibition, on April 6, 1–3 pm, to meet people who want to talk about the work. Unframed's Scott Tennent met with Nordman earlier this week to talk about the process of the exhibition. 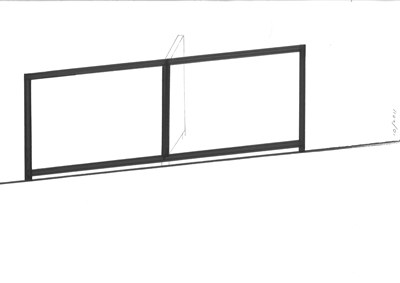 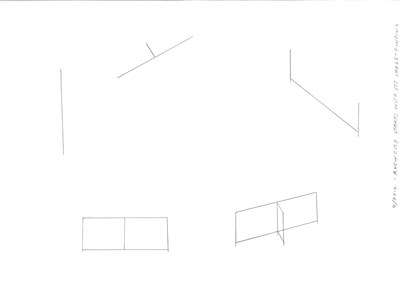 Maria Nordman, Sketch for YANG NA 2011–Present and Sketch — A NEW CITY STARTS WITH ITS IMAGE-FINDING

Maria Nordman: Talking with you in preparing an internet discussion is somewhat new for me — we are here together in the morning of April 3 at the entrance to LACMA  — & yet on the internet the unknown person is there in different times & places. Working with the internet is part of your work here & for me it is a question to the reader to what degree the pliability of this medium could work over time.

Scott Tennent: You have been a frequent visitor to your works at LACMA ever since your exhibition opened. Do you feel it’s important for you to be near your artwork while it is on view?

Maria Nordman: I'd like to answer your question in a contextual manner.
Let's start with where we are — right on Wilshire our main route to connect the Pacific with the center of the city — as we can see while being here —
the portal is made of air — it’s covered with a roof of solar cells.

That instantly & intuitively relates to how I see this city since I start to work here in the sixties. I think that Michael Govan is the person inspiring Renzo Piano to produce this entrance in this manner — instead of using a portal with glass & steel.

Choosing the air & the sun for the entry is not just a metaphor for this southern culture — it's an actual means of welcoming culture to begin continuously.

For this work the entrance also begins on Wilshire — going first through the Auguste Rodin Garden & then up the steps to the plaza of the Art of the Americas Building — which on the West side has now an open entrance used here for the first time — as an entry directly from the sun to the FILMROOM SMOKE —
itself in part made by the sun.

Scott Tennent: We went together to see Auguste Rodin's ORPHEE; I have never heard this work described in the way you talked about it. You showed me the moment in the sculpture where Orphee is plucking the last sound out of his harp, and you showed me his mouth and nostrils — we could practically see his breath. Had you been studying that sculpture before these projects began?

Maria Nordman: The fact that you mention this breath — & that breathing is also the action of the FILMROOM SMOKE by the two actors & by the sea — this real time that you are bringing into focus here — is also part of the instrument named YANG-NA.

Finding ORPHEE begins for me during the emplacement of FILMROOM SMOKE.
It actually connects as well directly to a project named LE DICTIONNAIRE DES BÂTISSEURS — begun in Lyon Biennial by an artist named ANNE O'NEAME
& continuing with the process of meaning in situ which is since the start of the sixties inter-generational — inter-cultural — specific to time & specific to place.

The ORPHEE discussions come up in different ways in recent meetings with students of UCLA — USC — & SFAI. Here are some aspects of what we discussed:

ORPHEE having looked for Euridice in the underworld is being allowed by the gods of Hades to bring her back to earth (after they hear him play his harp)
on the condition of not looking at her before they reach the full sun together —
as he doesn't await the precise moment of full sunlight —
he experiences the instant loss of Euridice.

Orpheus seems denied of his creative context by the loss of Euridice —
who symbolizes his creative force —
nonetheless he goes on to play his harp
in such a way as he wanders over the earth —
that the mountains decompose & follow him —
the rocks roll over each other —
the oaks uproot themselves — wishing to follow him
to hear his every note:
does this create a fusion
of personal time with the time of place?

Scott Tennent: Your question of time is very specific in each of your works.

Maria Nordman: Time is the start of this work
to which I give my attention — by this verb

Real time comes up also in the discussions with Michael Govan —
he visits these works since the eighties — in Varese — New York & other cities.

On seeing the FILMROOM SMOKE 1967 - PRESENT he states that this is the beginning of working directly with the person rather than working with objects in the room as is the genre of that time.

The factor of time also becomes important in that Stephanie Barron visits a work at the Documenta in Kassel that relates directly to works I make on the streets in Los Angeles. When I find that colleagues keep this kind of connection in time with the work — then the presence becomes even more intense & allows us to work with spontaneity.

It’s really important to have such an open spectrum of time of experiencing the works.

Finding the work at Documenta on the street — exactly where the meaning of the work is completely open & not pre-described by the Documenta structure — any person arrives next to the next person possibly creates the site as a work of art.

As well — I make works directly with people in open places — just as the entrance to LACMA. Possibly for this reason Michael Govan also puts me in touch with curator Jose Luis Blondet whose work also connects to actions in open places.

To answer your question in another way —
the FILMROOM SMOKE does not exist
if there is no person there.

Scott Tennent: In the last few weeks another project has entered the exhibition — a cabinet of drawings that were featured in the recently closed MOCA exhibition Under the Big Black Sun. Why did you choose to bring the drawings into this exhibition?

Maria Nordman: The PUBLIC SQUARE & the realization plan for a related work — GROUND OWL GROUND SQUIRREL PARK shows the intense potential cooperation of people in the city — still right now — we can start to co-create a new park —
that could also be a dwelling.

With the PUBLIC SQUARE drawing continues a constant possibility to find a site & a means of support for a new structure/structuring.

Various different means of working fluctuate & contradict each other in a very short period not unrelated to the park that you ask about — that even touches the FILMROOM SMOKE.

When the FILMROOM SMOKE takes place in that period I am also producing works with fire on the ground before sun-up — & with smoke relating to the clouds  as walls wandering directly over the desert floor. Even within a year the laser contradicts all of these works even more.

When in 1968 I decide to give up this laser electric energy that endlessly repeats itself — I then move directly to working with the sun.

Light is light of the sun.

This contradictory process with sculpture — in — realization expands as well into a new potential: would working with young people in schools allow such an inter-reflective process? Another reason why I am staying in Los Angeles now is to see if this work will continue to bring me close to universities and schools. I see the process of education itself as a work of art.

The connecting of museums is part of my work process which is inter-cultural and inter-generational. One example is that in the year 2000 in the exhibition Made in California I ask that LACMA sends its visitors to MOCA to visit the work TEMPLE & ALAMEDA. LACMA sends support to MOCA for the restoration of the work & the visitors of LACMA & MOCA could meet at the site together with the unknown person passing by.

Scott Tennent: One comment I’ve heard about FILMROOM: SMOKE 1967–Present is that it has a “peaceful” rhythm, as the camera follows the movement of the tide and the inhaling and exhaling of the two actors. But the work was made during the tumultuous era of the Vietnam War. Do you feel that people respond to the work differently now, 45 years later?

Maria Nordman: It's the whole context of time that causes a work —

the surrounding actions of time & place.

For me choice-making & directionality is sculpture.

Scott Tennent: What do you mean by "choice?"

Maria Nordman: Consciousness & how one chooses to use it.

Scott Tennent: You have been a frequent visitor at your works at LACMA ever since your exhibition opened. Do you feel it’s important for you to be near your artwork while it is in exhibition?

Maria Nordman: My works from the start seek

the person & the constants of the luminosity —

— the colors of the atmosphere — as part of the production of

meaning of what could become a community together

with the whole functioning of nature.

I would like to be invited to come & live here

A hospital building with one room built in concert with the sun.

A museum garden with a room built by & with the sun.

Just as I see your question as contextual —

they do have the exact same screen size —

but what is the actual meaning made by any person who is there at the time?