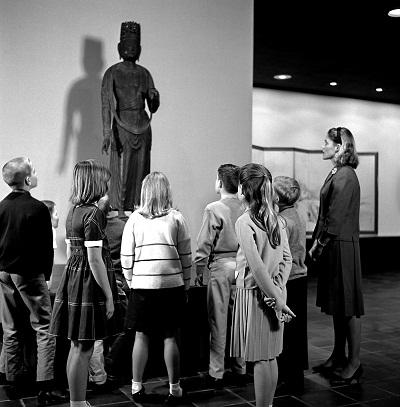 On the anniversary of the docents’ fifty years of service to LACMA, I’d like to share the beginnings and many accomplishments of this invaluable group of volunteers.  Around 1960, when LACMA was part of the Los Angeles Museum of History, Science, and Art, there were just fifty-three volunteers: thirty giving tours of exhibitions and a collection “highlight” tour for adults and twenty-three giving tours to fifth- and sixth-grade students. Today their ranks number more than five hundred and they have toured more than 1 million adults and 1 million students. 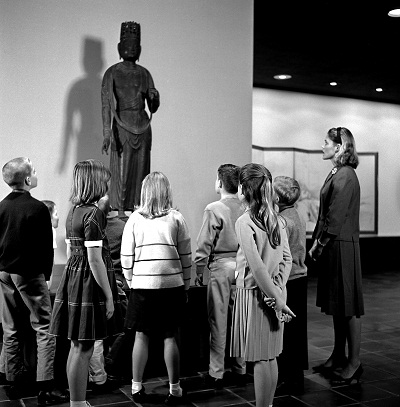 This group of volunteer docents became an official council in 1962, three years before the completion of the new museum, which was dedicated solely to art, opened on Wilshire Boulevard.  In preparation for that opening, the volunteers were instructed to increase their numbers from fifty-three to two hundred.  Docent Glenn Janss was appointed chair and began working with Henry Hopkins, assistant curator of modern art, to train the new recruits.  But before they moved to LACMA, the docents toured three blockbuster exhibitions at Exposition Park: Treasures of Tutankhamun, Treasures of Versailles, and Treasures of Mexico; they also polished silver in conjunction with touring a small exhibition of English silver and photographed the permanent collection in order to give lectures in the community. 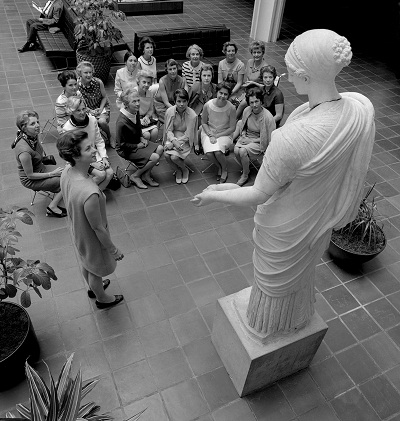 Just one year after the opening, the docents played a vital role in the controversy surrounding the 1966 installation of Edward Kienholz’s Back Seat Dodge ’38. Because of the sexually suggestive nature of the piece, the County Board of Supervisors insisted that the car door remain closed unless a docent was touring. Docent, and later trustee, Terry Bell recalled, “We toured almost around the clock, so that the public could be better informed.” In addition to touring the public in those early years, the docents were also called upon to record audio tours for special exhibitions.

Docent Peggy Hazen joined the Council in 1970 and set a direction for training that lasted into the early twenty-first century.  Advocating extended looking, Peggy instructed docents to focus on the overall effect of a work of art. Tour offerings were expanded to include visitors with special needs, including the visually impaired and deaf, with docents learning sign language as part of their tour preparation. 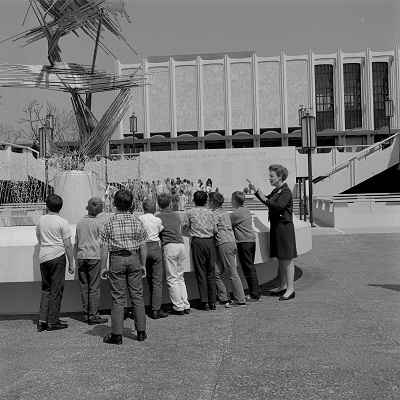 School group on a docent-led tour at LACMA

The Council was exclusively female until 1973 when Morris Treiman paved the way for men; by 1980, there were two additional men in the Council. Today the Council has twenty-five male docents and many members who maintain full-time careers.

The decline in funding for public education in the late 1970s brought a reduction in school tour visits, which the docents addressed by broadening their tours to include third- and fourth-grade students and adding tours that aligned with curricula for language arts and literature. This has been a recurring issue as Los Angeles public schools continue to see reduced funding and an emphasis on teaching to standardized tests. To meet this challenge, tour offerings increased to serve grades 3–12 and the docents worked with the Education Department to align tours to a wider range of subject areas, while outside support and the generosity of members of the Docent Council have made it possible for local students to receive free buses to visit the museum and learn through the collection and special exhibitions. 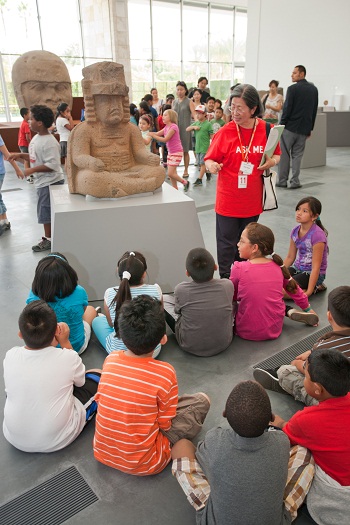 Docent Della Speer welcomes a student group on a school tour of Olmec: Colossal Masterworks of Ancient Mexico at the exhibition’s opening week in the Resnick Pavilion in October 2010

Museum expansion began in the early 1980s, providing the docents with several years of gallery closures, reinstallations, and new objects to research. They weathered the changing landscape, and the sound of jackhammers, and kept informed by calling their tour chair every Monday morning to see which galleries would be available for touring. Once completed, the new Ahmanson Building, Art of the Americas Building, and Pavilion for Japanese Art offered an array of touring opportunities that included a Discovery Tour added to serve the 300 to 400 new members the museum was signing up on a monthly basis.  In this century, the Broad Contemporary Art Museum and the Lynda and Stewart Resnick Exhibition Pavilion have extended those possibilities even further.  The docents gave tours to more than 8,000 adults and students for the three opening exhibitions in the Resnick Pavilion. 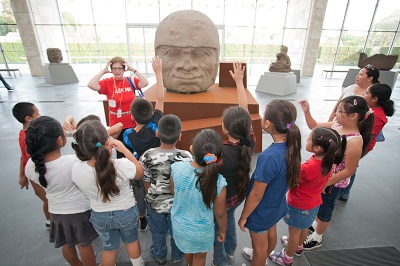 Docent Linda Pennell asks students to describe this ancient Olmec head on a school tour of Olmec: Colossal Masterworks of Ancient Mexico during the exhibition’s opening week in the Resnick Pavilion in October 2010

As the docents embark on their next fifty years, they continue to expand their knowledge and their ability to share the collection and exhibitions with the public.  Now that the Docent Council is fully part of the Education Department of the museum, educators work with school tour docents to learn new touring techniques and public tour docents to gain an understanding of strategies for engaging visitors in informal conversations. The Docent Council’s commitment to the institution, the public it serves, and maintenance of the highest standards is as strong today as it was for those original fifty-three volunteers.  The museum is immensely grateful for the service they provide.