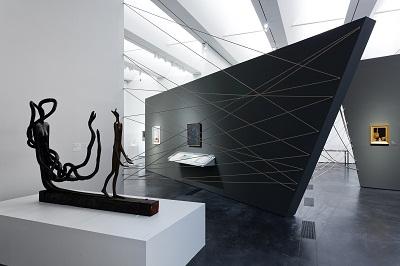 In Wonderland Redux: The Male Gaze

LACMA's special exhibition In Wonderland: The Surrealist Adventures of Women Artists in Mexico and the United States is, in some peculiar way, like a well-kept secret or a lost island of beautiful visions the collective grandeur of which adds so much more to the understanding of surrealism as a movement and expresses so much more about women than any art movement I could name.  Here surrealism debunks Freud’s question of  “What do women want?,” not only suggesting its simplistic nature but also the sheer paucity of its reach. What we sense is an inner worldview of such variety and complexity that no single question could encompass the nature of the female imagination. Of course, this is all speculation as I sit on the other side of the great divide looking through my intrinsic desire, my idealization, and an opacity that one so readily takes for granted, and yet it also absurdly seems on the verge of worship, knowing all too well the opposite emotion is just as possible. 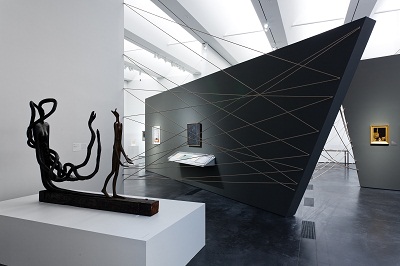 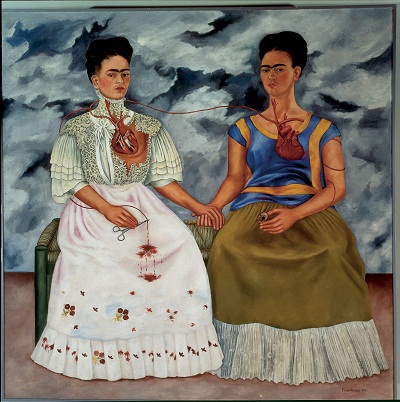 The weather is decidedly stormy in Frida Kahlo’s The Two Fridas, (Las Dos Fridas), the portrait as the imperiled self, and for most of In Wonderland it’s overcast, indoors and out, or inky blue, or ruby blood sunset, abstracted or realist. Containment is the abiding abode.  In fact, one could say that weather is inordinately important to the atmosphere of this marvelous collection of art, but it is much more than mere mood; it’s an inhibited space, more a solarium. In Dorothea Tanning’s Birthday, the figure stands, bare breasted, possibly naive, wearing a skirt made of vegetation and cloth, and holds a door open through which there is a series of gray, receding doors, clustered and open, mysteriously beckoning and foreboding. In this estrogen-filled universe, the air is of a mystic nature: ectoplasmic, thick with magical emanations and fractal edges and teeming with small creatures. Sylvia Fein’s fastidious entities in The Lady Magician convey a primordial otherworldliness that works its way through many of the paintings. 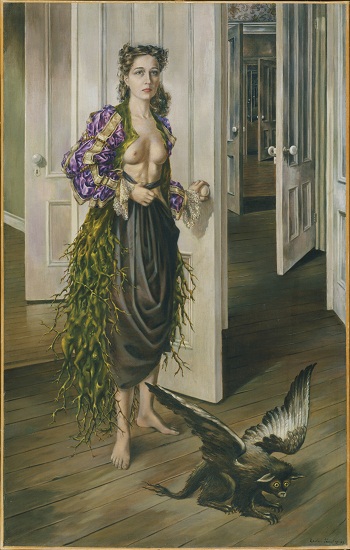 And what’s to be made of Leonora Carrington’s Red Mask and Delicate Fly? Some nightmare vision! For Ms. Carrington, Shakespeare’s  A Midsummer Night’s Dream flows so readily to mind, “More strange than true: I never may believe/These antique fables, nor these fairy toys./Lovers and madmen have such seething brains,/Such shaping fantasies, that apprehend more than cool reason ever comprehends.”

And the material world sits uneasily in the surrealist’s domain, more a mechanical interloper and a divisive puzzle—some dystopian tundra where a dress knows all of its ugliness, such as depicted in Frida Kahlo’s My Dress Hangs There. Lee Miller’s Severed Breast from Radical Mastectomy is the dark offering on a bourgeois plate. The photo collage of Lola Alvarez Bravo’s The Dream of the Poor or her Some Rise and Others Fall, in which money grinds the weak, and ambition is an up-and-down toil. And these feelings of circuitous entrapments bleed through home, work, and personal dreams as unwitting co-conspirators. 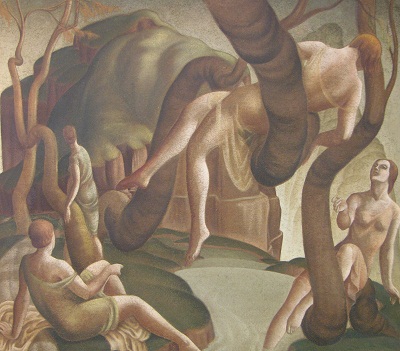 In my rather blunt skills, it seems the female surrealist’s erotic world is self-contained, shrouded in that sense of being both the subject and the object dispersed as solar-centric or nature as it were, which is somehow ironically a mystery known and unknown to the subject itself. A kind of ongoing surprise, it seems, for there is an odd mixture of real and feigned innocence and sheer guile that should be seen. And maybe something darker, a savage secret nature of pain as the black monkey and black cat play their parts in a painting of wounded self-awareness in Kahlo’s Self-Portrait with Thorn Necklace and Hummingbird (victim or martyr?) or Remedios Varo’s Creation of Birds as the humanoid owl paints birds into existence and odd fluids flow from mysterious vessels. It’s the witness of inner destruction and the act of creation; the female persona, balancing, making harmony in all forms of animal magnetism, animal husbandry, for she is closer in spirit, maybe even a form of sensuous vegetation as we see her among the phallic limbs in Helen Lundeberg’s The Mountain, romantically an earth-made thing. The late medieval painting Garden of Earthly Delights suggests something quite different. This is an ironic twist on the great Freudian trope “penis envy,” that gender conceit that seems absurd on an existential level. In In Wonderland, the penis is at best an intruding fact. Louise Bourgeois’s He Disappeared into Complete Silence or her more brutal Persistent Antagonism could suggest an altered species. From the evidence of this art, I don’t know if it would qualify as envy, more a theater of moral revenge. 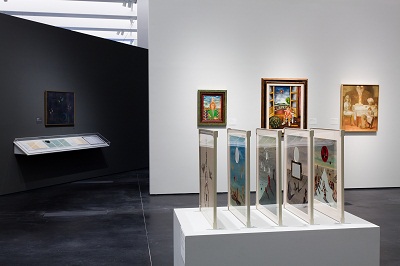 One could take this art as a breach of the fog of intimacy, an attempt to look through Eros, that self igniting flame and its massive betrayals into this natural and unnatural naturalism, which conceals a fateful duality of seeing what men see and knowing so much more.  Bridget Tichenor’s The Imprisoned, or Louise Nevelson’s dense and ominous, Sky Cathedral/Southern Mountain and Dorothea Tanning’s Family Portrait, render scale and the occluded male as otherness in the ironic beauty of art, which belies the psychological realities and inconsolable grief that marked their lives about the haunting, fragile place of loss, courtship, divorce, separation, death, and suicide. And though surrealism, as an art movement, may be trapped in a particular time, buffeted by social and political mayhem, the thrill of the visions in this exhibition crackles with a life of undaunted revelation. 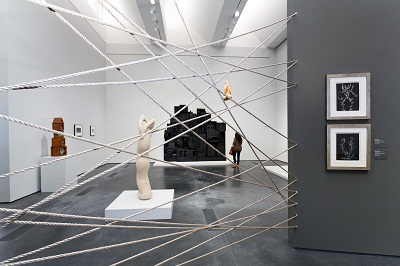 Within such fabulous realizations, it only slips ever so slightly at the shore of the unstated otherness. The existential “appetite,” the carnal dance we do, the DNA, that indifferent condition that plants us willy-nilly into the only known world possible and gives only dreams. Nothing in the show captures the absurd abstraction that this whole thing may be about better than Dorothea Tanning’s The Seven Spectral Perils, whose images and ideas escape a composite understanding but leave a visceral blow. Male (my) guilt??? Well, yeah!

As a guard, I am most often asked the question that is always joyful and in this remarkable show, with its dream like set-up, weirdly telling, curiously apt, and bizarrely ironic: “Which way is out?”

In Wonderland closes May 6. Reserve your tickets now. Members can see in In Wonderland for free but still must reserve tickets.