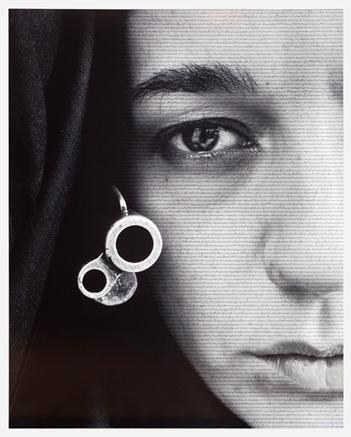 Shirin Neshat is perhaps the best-known artist of the Iranian diaspora following the 1979 Revolution, which replaced a secular regime with an Islamic republic. Born in Qazvin, she left Iran at the age of sixteen to study in the United States; she received her BA, MA, and MFA from the University of California, Berkeley, before moving to New York. Neshat returned to the Islamic Republic of Iran in 1990 and much of what she saw and experienced informed her first major body of work, the photographic series Women of Allah. The series includes black-and-white images of chador-clad women, often the artist herself, covered with text in black ink, and frequently focusing on different body parts—face, feet, hands, eyes. At times the model, gazing directly at the viewer, poses with a rifle or gun in a provocative manner, while nonetheless complying with an Islamic code of dress. Neshat has noted the deliberate emphasis on four symbolic elements in this series: veil, gun, text, and gaze. She intends these images to be ambiguous; they contradict a Western notion of Muslim women diminished and desexualized by the veil. Although they may be disempowered by their faith, Neshat’s women are strong, even heroic; they are eroticized by their weapons and sanctioned by the texts inscribed on their bodies, which enable them to speak although they are forced to be silent. 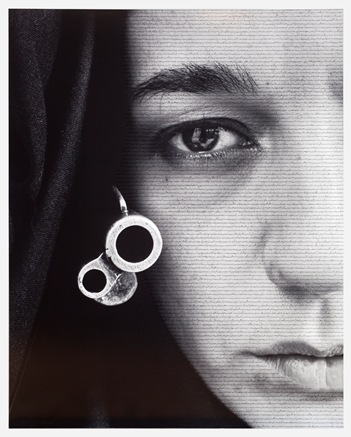 The photograph Speechless is the most evocative and archetypal image in this series. The print shows the right side of a woman’s face (not Neshat), the barrel of a gun emerging like a gaudy earring from the shadowy area between her cheek and the barely visible chador. She stares calmly outward. Her face, except for the eye, is covered with Persian text written directly on the image. Although Neshat has tightly framed the face of the subject, it is the viewer who is held captive. Inscribed on the face are the words of the poet Tahereh Saffarzadeh, in which a woman addresses her brothers in the Revolution, asking if she can participate as well.

LACMA has recently begun to acquire contemporary art of the Middle East within the context of our Islamic collection. We do so in the belief that the function, strength, and ultimate success and relevance of the collection should not be based solely on exploring this art as a means to better understand the past of a single region or culture. It can also be seen as a way to build creative links between the past, present, and future in a global sense. Shirin Neshat has not only inspired a new generation of artists in the Middle East, especially Iran, but her art also concerns and often coincides with what we experience on the evening news.