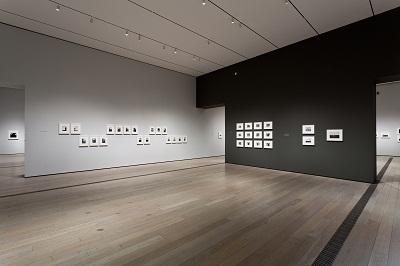 Robert Adams is on the road, on the great American blacktop falling into that infinite horizon. Nearly three hundred photographs from his forty-year career are on view now through June 3 in BCAM in the exhibition, Robert Adams: The Place We Live, a Retrospective Selection of Photographs. 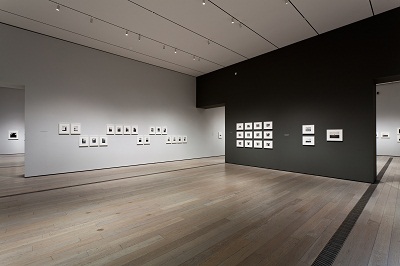 For Adams, it’s Colorado in all directions: north of Keota, Box Butte County, Bowen, Arriba, Otis, Weld County, Boulder County, Niwot, Lookout Mountain, Pueblo County, Colorado Springs, Denver, on and on. In his black-and-white pictures we visit the past and big prairie skies. His sentimental journey traveling in a west of vast plains, of felled forests, of fledgling townships, grand trees, and a people among an indifferent nature resolutely and unpretentiously there. Robert Adams knows, instinctively, that life is the size of memory, grand but postcard size like his photos, or a letter, or a diary. Memory is black and white, while dreams are cinemascope and Technicolor. Memory is nostalgia doubling back, past lives that somehow Adams’s melancholy visions render intimate and vaguely personal. 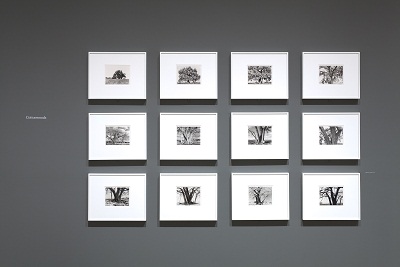 His literary background seems to inform each composite title of his picture books, invariably suggesting, “once upon a time,” or “as a result,” or “in the meantime,” and “They lived . . . ” And it should be said that you must peer into them. In their frames they’re art, while in their books they’re a kind of poetry. To my senses, photography has at least two lives. One is that of the photographer and the other is that of the onlooker. In the middle of nowhere, the interstate exit sign “Eden” cannot easily lose its ironic reference, though Adams wishes otherwise. In America, breeding irony is practically unavoidable. He is of the earth-bound reality principle, passionately. Charlotte Cotton wrote in The Photograph as Contemporary Art: “What is significant . . . is photography enduring capacity to transform even the slightest subject into an imaginative trigger of great import.” And to that degree, this is my guiding light for Adams’s work, without the over-pressing need that it be somehow more. 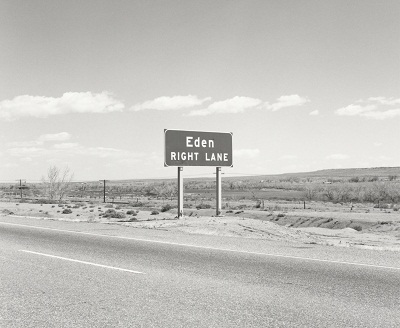 Interstate 25, Eden, Colorado, 1968, printed 2006, Yale University Art Gallery, purchased with a gift from Saundra B. Lane, a grant from the Trellis Fund, and the Janet and Simeon Braguin Fund, © 2012 Robert Adams

With his tough, serious simplicity matched by a seemingly guileless affection for what was before him, Adams takes the land and human disruption at face value. Here the 1960s modernist’s glint, the social consciousness, the land and its wreckage, proved magnetic and the felled forests have a killing field aspect that is inescapable.  For Adams’s photos to make sense of them, to relive their quiet drama, he must make a poet of us, distilling this sometimes beautiful, fragile world, a land and a people without reservations—fierce, implacable, and clashing where silence reigns. Sometimes the work feels anachronistic, like that other America: The frontier of “white” America moving inexorably west, impervious of damage, and yet somehow not taming this ocean of bush and rock that bakes in the hot sun, though the sprawl tirelessly expands. One gets the feeling that through these images, a deeply lamented past we experience, while paradoxically the future exerts its power on the present. Maybe this is the reason we look back with some regret. 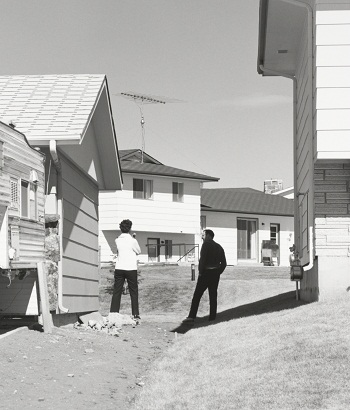 In a New Subdivision, Colorado Springs, Colorado, 1969, Yale University Art Gallery, purchased with a gift from Saundra B. Lane, a grant from the Trellis Fund, and the Janet and Simeon Braguin Fund, © 2012 Robert Adams

His topographic comes with an odd detachment.  Maybe it’s not unusual, as if their actual presence, people that is, altered something.  Perhaps unfairly, it seems to me people are sort of “by the way,” interesting, casual, but not the real drama—more the collective presence. Not that it’s not beautiful without people, the night shot of the empty chairs at the back/front doorway as the light glares down and through their windows, a theatrical scene, surely about place.  Maybe it’s inevitable, the intrinsic mystery of the night.  By contrast, the tension of the daylight record of storefronts, debris, and the carpets of tract housing deny such mystery, suggesting an environment in dire alteration.  The German photographer couple Bernd and Hilla Becher, with their cool and formal documented water towers, made an enormous impact on American art.  Robert Adams’s churches—iconic, isolated, and idealized in their structural elegance where the light, a key to his work, enhances them to a degree of glorification—manage something more than the cool distance for a place of worship. But he seems most at peace in those photos of Clatsop County, Oregon, where the ocean and sky blend in swathes of shimmering silver. 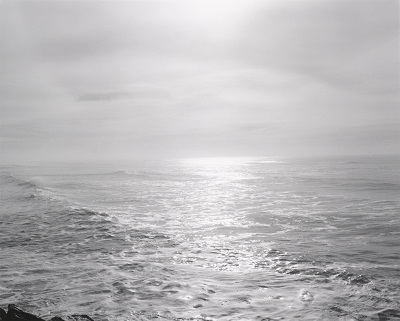 Southwest from the South Jetty, Clatsop County, Oregon, 1992, Yale University Art Gallery, purchased with a gift from Saundra B. Lane, a grant from the Trellis Fund, and the Janet and Simeon Braguin Fund, © 2012 Robert Adams

After all, the real stars in this pictorial journey are the trees, with their stark personalities, their tonal range, and the sheer power of their presence. Almost always on the edge of ruin, the palms that hint at some disaster or merely oversee the distant freeway, or the pines that sit at the top of a ridge beneath a felled forest, or a mere stump in the middle of a field, or as a night shadow thrown as a ghost across a white garage—the trees all live an electric life in his lens. One half expects T. S. Eliot to rise from the pages of his books. The intimate face of those poplars and the unbelievable Cap Blanco State Park, Oregon, and the tender record of the cottonwoods transmit Adams’s photographs as wordless poems to each image. Considered as a whole, his art, his west though real and filled with reverence, has the feel of a fictive place where we’ve lost our hearts in search of them.

Robert Adams: The Place We Live is on view now through June 3 in BCAM. Members get free admission to this exhibition and others all year round. Recently, author Susan Straight also gave her impressions of Robert Adams at LACMA and discussed the influence of landscape and nature in her own work.