The Art of Codices in Children of the Plumed Serpent

People don’t usually connect the words cool and codices, but go see the painted manuscripts in Children of the Plumed Serpent and you just might change your vocabulary.  A codex is a series of deerhide “pages” sewn together and folded like an accordion. The pages are then covered in gesso and painted with figures in bright colors.  The three codices in the exhibition—the Codex Zouche-Nuttall, the Codex Selden, and the Codex Becker II—tell histories of particular Mixtec communities in Mexico.

Part of what makes these codices so special is that the corpus of extant pre-Columbian painted manuscripts numbers only twelve, of which the Codex Zouche-Nuttall is one.  Many of the codices were destroyed in the first decades following the arrival of Hernán Cortés. Spanish conquistadors and Christian missionaries considered these painted works “diabolical” because of their images of idolatry, human sacrifice, and divination.  The Codex Zouche-Nuttall’s survival is remarkable and may be due to its unusual history. It’s very likely that it first left Mexico as part of a shipment from Cortés to the king of Spain, Carlos V.  This is the first time it has returned to the Americas in almost five hundred years.

Even after the conquest, native artists continued to produce painted codices.  The codices Selden and Becker are among those from the colonial period, but most scholars consider them to be continuations of an indigenous tradition.

The Codex Zouche-Nuttall presents genealogical histories of the Mixtec dynasties of Tilantongo, Teozacoalco, and Cuilapan. Its pages are painted on both sides in bold blues, reds, and gold.  The side on view illustrates the life of Lord 8 Deer, the founder of the Mixtec people, his family history, his travels, conquests, and eventual ascent to power.

The codex includes scenes leading up to and of 8 Deer’s grand nose-piercing ceremony. The nose ornament he wears is an important symbol of his new status as tecuhtli, or dynastic head, and legitimates his right to the Tilantongo throne. 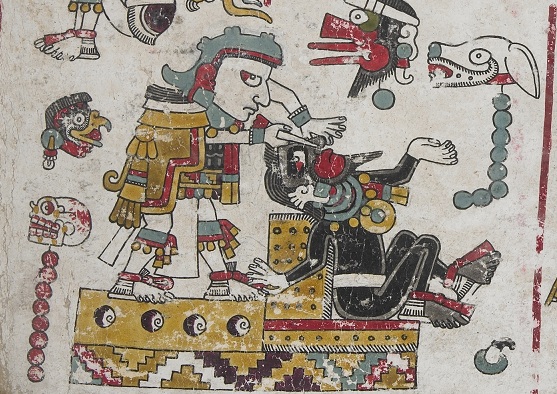 Also impressive are scenes of Lord 8 Deer’s journey to meet the sun god, from whom he receives precious gifts to present at the sacred ball court.  If you look closely at the pages on display, you’ll see the I-shaped court, where Lord 8 Deer offers a gold and feather object. 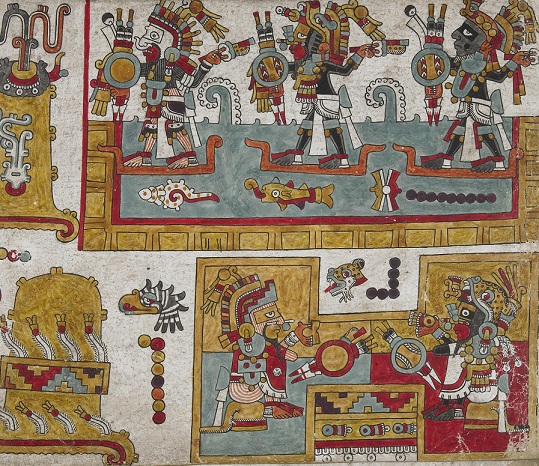 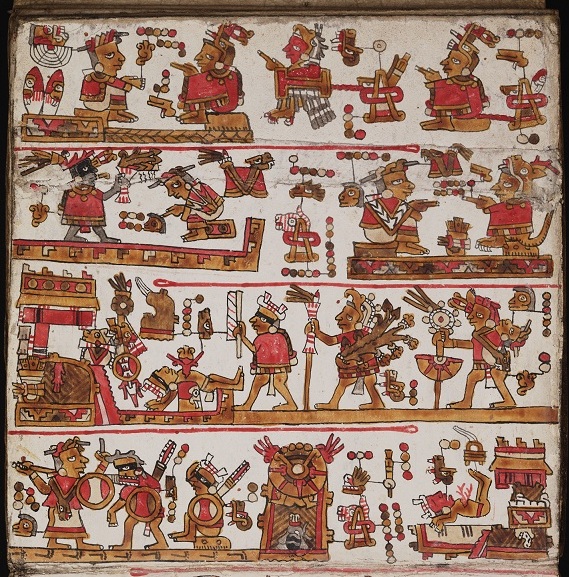 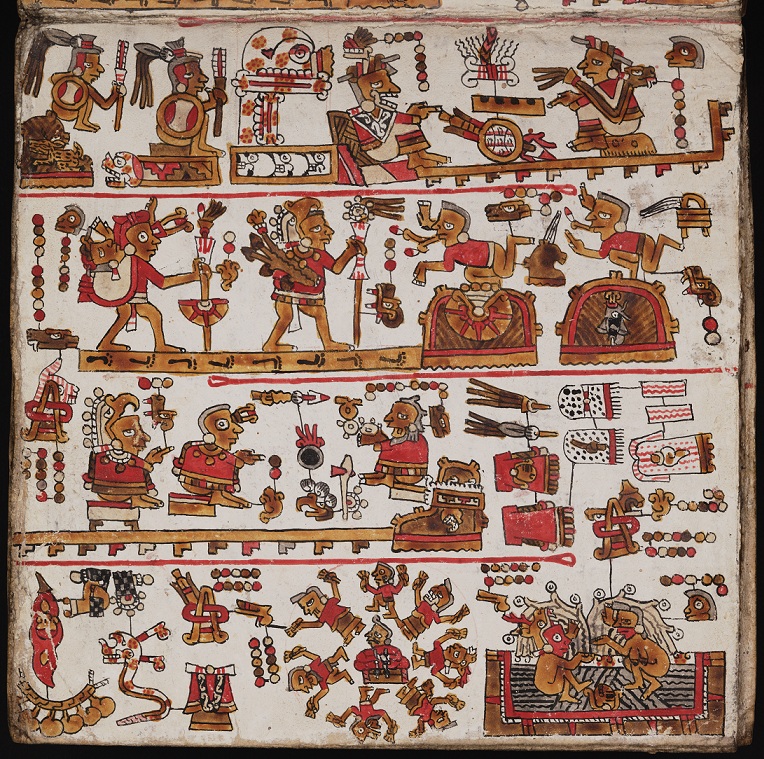 Unlike other Mixtec codices, the Codex Selden is laid out vertically: it reads from bottom to top in a boustrophedon, or winding pattern. In an earthy palette of brown, gold, red, and orange, beautifully detailed illustrations outline native dynastic genealogies of the town of Jaltepec.

The pages on view in Gallery 4 show the life of the female ruler, Lady 6 Monkey, a rival of Lord 8 Deer (from the Codex Zouche-Nuttall).  They illustrate, among other important events, 6 Monkey’s marriage to 11 Wind and the costumes and rituals associated with betrothal.  In the case just in front of the codex in the exhibition, you’ll see examples of jewels and ritual regalia worn or gifted during marriage ceremonies.

Lady 6 Monkey and Lord 8 Deer vied for power in Tilantongo.  It’s worth knowing that 8 Deer appears in the Selden and 6 Monkey in the Zouche-Nuttall. For example, in this scene from the Zouche-Nuttall, the rivals are in the top center, identified by their name glyphs. 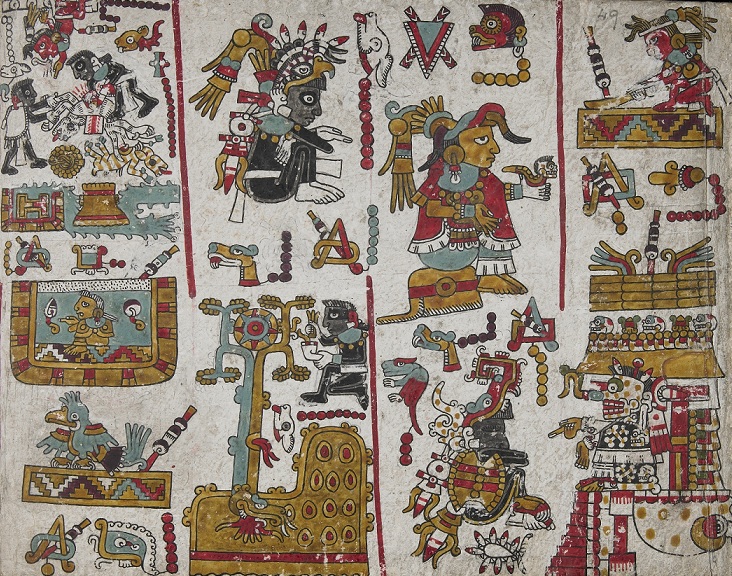 This cross-referencing of important figures in the different codices highlights the geographical, historical, and mythological connections shared by the Mixtec communities of Oaxaca.

At some point after 1556, three-quarters of the Codex Selden was “erased” and painted over. What we see today is a revised version of the earlier story.  Some scholars believe that the codex was repainted for use in a legal dispute between the towns Jaltepec and Yanhuitlán over possession of a third town, Zahuatlán.  Unique features of the codex—its orientation, its narrow focus on one particular town, and its detailed genealogies—suggest it was made for an audience of outsiders, possibly the courts, rather than  native nobility.

As in the codices Zouche-Nuttall and Selden, connecting the stories told in the manuscripts with specific towns and places in Oaxaca has made them easier to read. The Codex Becker II cannot be linked to a distinct town or community and the people represented have not yet been identified, putting into question the purpose for its creation.  What’s more, there is no narrative to the codex, but we can see that the artist wanted to show dynastic genealogies, beginning with the first ancestral couple emerging from a mythical place of origin and continuing through several generations of historical rulers.

The codices on view are impressive examples of ways that the ancient Mexicans recorded and thought about history.  Reunited with other contemporary material objects in the exhibition, they help to present a fuller picture of Mexico’s past.

To explore more pages of these fascinating codices, visit the Foundation for the Advancement of Mesoamerican Studies, Inc. database: