Whistler’s Etchings: An Art of Suggestion

One of LACMA's current installations, Whistler’s Etchings: An Art of Suggestion explores the prints of the American artist James McNeill Whistler, a key figure among the artists, critics and print publishers of the so-called Etching Revival of the latter half of the nineteenth century.

In pursuit of a career as an artist, Whistler sailed to Europe at the age of twenty-one. He arrived in Paris in 1855, where he received artistic training, and later settled in London, never to return to the United States.  Whistler travelled broadly throughout England and the continent, chronicling in prints his response to the urban scenes, built landscapes, and people he encountered.  Through his paintings, prints, and writings on art, he was to achieve lasting international acclaim; but his combative and polemical character also earned him his share of notoriety, as he abruptly ended significant personal and professional relationships and engaged in public critical debate. The reception of Whistler’s paintings and prints at the time of their making was divided.  One of the most damning statements about Whistler’s work was made in a review of the painting Nocturne in Black and Gold: Falling Rocket (Detroit Institute of Art), in which the influential English art critic John Ruskin accused the artist of "flinging a pot of paint in the public's face."  Whistler sued for libel and won the case. He was however, awarded a mere farthing, leaving him in financial ruin. 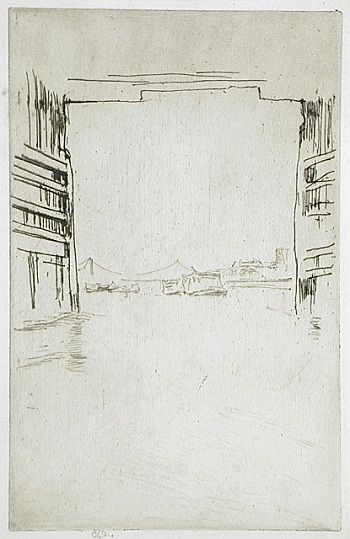 The title of the installation, Whistler’s Etchings: An Art of Suggestion, is taken from a review of the artist’s 1871 Thames Set, which, while in itself positive, makes note of the criticism his etchings did receive:

“It is one of the obvious charges against Mr. Whistler, as against many other masters of the etching-needle, that he constantly contents himself with slurring and hinting, instead of working patiently to a finish.  The etcher, when this is alleged against him, has to say for himself that his art is not an art of finish, but an art of suggestion, that what he uses this method and material for is to make notes and set down impressions, not to produce elaborate pictures, therefore, that he has a perfect right to stop where he pleases, and that it pleased no other etcher to stop so often as the chief of them all, Rembrandt.”  (Pall Mall Gazette, 1 January, 1872) 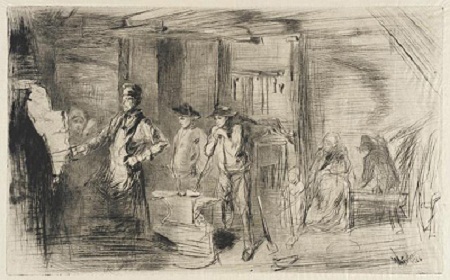 Indeed, with their summary style, abbreviated forms, and fragmentary views, Whistler’s etchings and drypoints promoted an aesthetic language counter to the prevailing Victorian taste for the elaborate narrative description and meticulous finish of reproductive engravings.  Whistler exploited the marks of artistic process (for example, taking his plate through as many as twenty states in his Doorway) and treated individual impressions in a singular manner by varying the application of ink and the supports used, thus challenging conventional notions of finish. 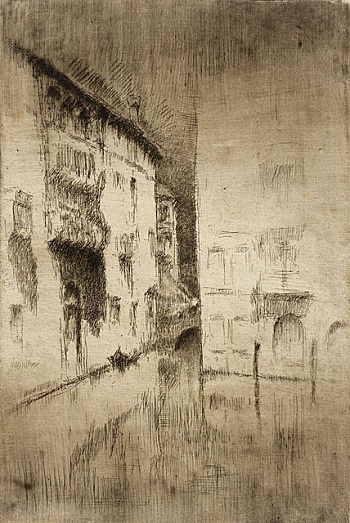 Among the twenty-five works exhibited are seven images of Venice.  In 1879, Whistler travelled to Venice to execute a suite of etchings commissioned by the Fine Arts Society of London.  These etchings, which beautifully render the effects of light and atmosphere through a skillful use of reserves of paper and expert manipulation of ink, are today considered among the most prized of Whistler’s oeuvre. In Whistler’s day, they did much to restore his reputation and finances, which had both suffered from the protracted Ruskin legal trial.  Yet when they first appeared, the Venice etchings were not met with universal approval. In a collection of writings published in 1890—titled The Gentle Art of Making Enemies—the artist reprinted some of the unsympathetic responses his etchings had elicited (alongside his own acerbic retorts).  These remarks speak of an abiding apprehension towards the question of finish.  Whistler was disparaged as “an artist of incomplete performance,” his Venice etchings having been “done with a swiftness and dash that preclude anything like care and finish.”

While many of the prints on view are indeed seemingly spontaneous in execution, at times resembling preliminary studies taken from life, Whistler continuously reworked his plates, fastidiously redefining details and often reinforcing areas of shading to compensate for the wear of the plate.  His economy of means belies his great expense of labor.  This is especially the case with Whistler’s informal and concisely executed portraits.  Although spared of details of costume and setting, they are convincing likenesses that successfully convey distinct character and mood. 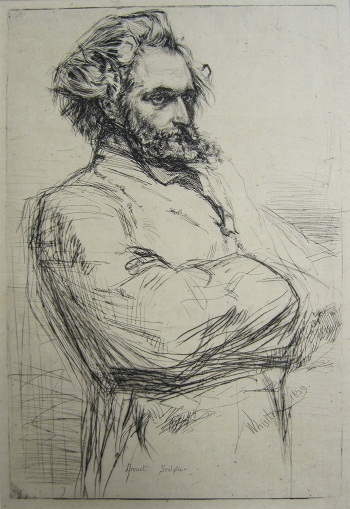 Not all critics failed to admire Whistler’s mastery of the etching medium.  Many appreciated his resistance to the strongholds of Victorian convention, and praised the bold quality of his compositions which often have the appearance of being casually rendered: “they are singularly felicitous, dashing, dexterous, and suggestive” (The Critic, 25 May 1861).  This selection of Whistler’s etchings and drypoints considers—indeed celebrates—the printmaker’s exploration and subversion of artistic resolution.   It examines in particular the variety of technical means Whistler deployed to achieve his carefully considered and desired ends.