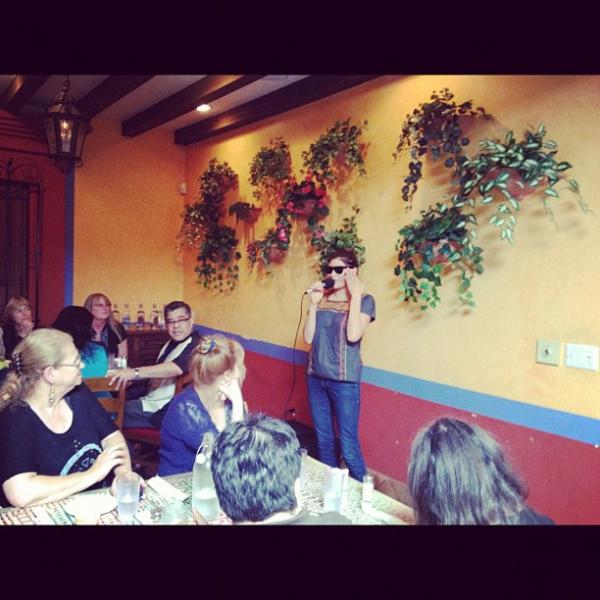 From Ancient Mexico to Today: Mole and Mezcal

When I first met with Victoria Lyall, associate curator of Latin American art, last year to discuss the exhibition Children of the Plumed Serpent: The Legacy of Quetzalcoatl in Ancient Mexico, the topic of food and feasting came up continually. This past weekend, we hosted a mole and mezcal tour in conjunction with the exhibition. We partnered with local food tour company SixTaste and visited two Mexican restaurants—Moles la Tia and Guelaguetza—to see how ancient Mexican food culture has lived on today.

Before the tour, Victoria and I met with Guelaguetza partner Bricia Lopez (referred to as the “Oaxacan Princess” by Jonathan Gold) to talk about the ancient and modern Oaxacan culture of feasting and how Oaxaca traditions live on in Los Angeles. 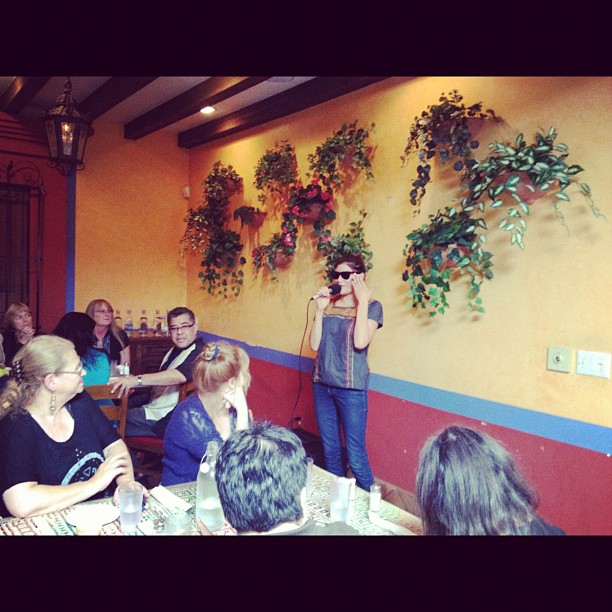 Bricia Lopez, partner at Guelaguetza, talking about Oaxacan food culture on the mole and mezcal tour, photo by Marian Bacol-Uba.

Alex Capriotti: When Victoria and I started talking about the exhibition more than a year ago, this one image kept coming up. It was a part in the Codex Nuttall where two people were shown bathing in chocolate. Food seemed like such a big part of ancient Mexican culture.  Can you talk more about that? 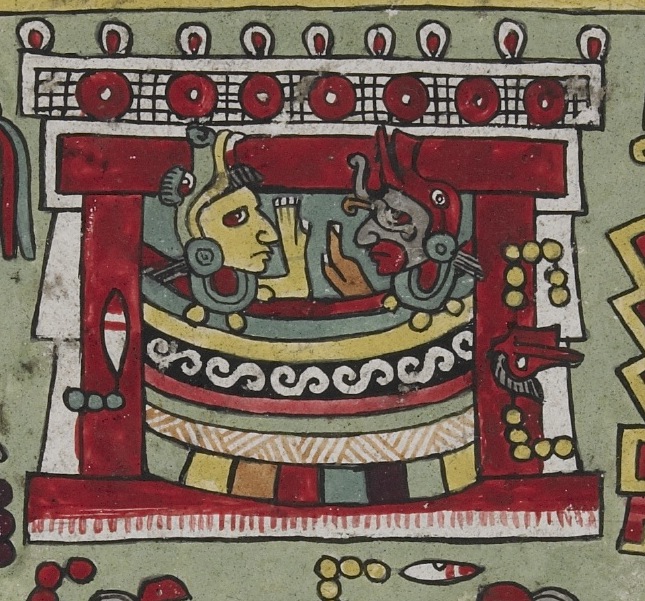 Vicotria Lyall: Feasting was the basis of any kind of gathering in the pre-Columbian period and it was the glue that held all of these communities together. And you could find different kinds of feasts and parties. In the Mixtecs and the Zapotecs, for example, much more of the feasting was related to weddings. This was mostly because arranged marriages and that kind of festival was how power was exchanged and how people were able to negotiate more land and better access to trade routes. But among the eastern Nahuas, the feasts were actually much more geared toward divination. For them, it was much more about calendrical rituals and communing with the ancestors.

These societies had different relationships with the dead that filtered into their food cultures. The Mixtecs and Zapotecs would bundle their dead. They made them into mummies, attached masks, and put them in caves where they would visit them regularly. But the Nahuas would cremate them. They would burn them and put them in urns and they would turn into deities. So it was kind of a different relationship. A lot of the feasting rituals for the Nahuas related to the skeletal cult because of this. Many of their feasting items have skulls and severed hands. But for the Mixtecs and the Zapotecs, their feasting rituals were much more related to music, dance, and chocolate. For both, it was all ritualized. Feasting happened on very specific times and days.

AC: Bricia, I know that Guelaguetza’s roots are long. You just opened your mezcaleria in the restaurant recently. Does your family have a history with mezcal?

Bricia Lopez: My dad made mezcal, my grandfather made mezcal, my great grandfather grew agave, so mezcal is part of who we are. Now, what we’ve always done is becoming more appreciated. We had a bar in the backroom at Guelaguetza and our bartenders are very well versed in mezcal—where it comes from, what it tastes like. We’ve always sold mezcal, but we’ve never had a forum for people to talk about it.

Victoria Lyall: It seems very timely too. I started going to Mexico city pretty regularly about five years ago. About three years ago, I started noticing that mezcal was what everyone in Mexico City wanted to drink. You building the mezcaleria was perfect timing.

AC: What’s the history of mezcal? Has it always been around?

VL: In the chronicles from the sixteenth century, we found that for the Nahuas themselves, drinking was actually very ritualized and governed. If you were a woman, you weren’t allowed to drink until you were older—till you were beyond the strictures of society. It was looked down upon if you got drunk.

AC: How did that phase out?

VL: I think the alcohol that the Spanish introduced—and the mores they introduced—were very different.

BL: The Spanish introduced liquor to get drunk, rather than liquor as part of ritual and cultural experience. When I give talks about mezcal, that’s what I always say. Mezcal isn’t something you drink to get drunk. Mezcal is something you drink before you eat. It is very traditional that, before you start your meal, you drink mezcal. You start drinking and you start conversing—it warms you up a little. And then from there, the food comes, and it intensifies the flavors in your mouth. Especially if you are eating a Oaxacan meal, it brings out all of those flavors in the dishes. A lot of chiles and smoked foods we use in mezcal have very long finishes. When you combine that with certain dishes, it makes a good pairing. I think the perfect pairing is a mole and a mezcal. It is a completely different experience than just having one by itself.  The chapulines (grasshoppers) also go really well with mezcal.

AC: Does the tradition of eating chapulines go back into ancient Mexican culture as well?

VL: Yes! We have this beautiful piece in the show of a green stone grasshopper with the jewel of Quetzalcoatl. 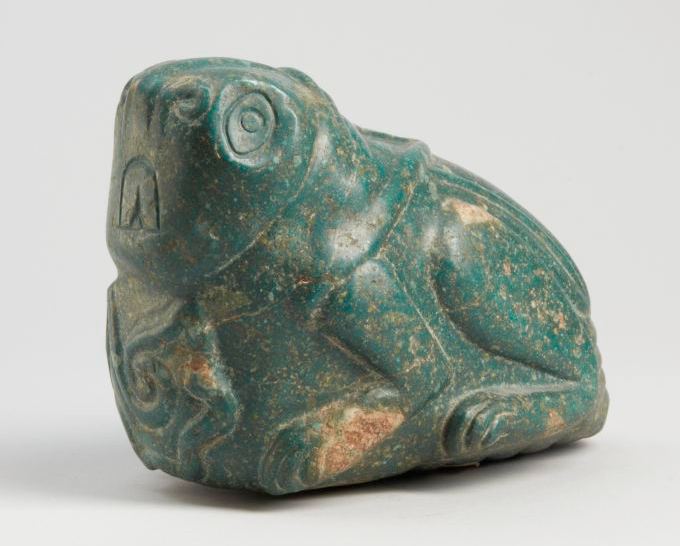 AC: Victoria and I were talking earlier about an article by Jonathan Gold where he talks about how L.A. has so many different culturally specific restaurants, but sometimes they are cooking for themselves and for their people in L.A. But it’s not so much fusing cultures together through food. Is that what you feel like Guelaguetza does—to keep the Oaxacan culture strong and alive?

BL: Yes, my dad from the very beginning wanted to sell food to Oaxacanios. He was never interested in doing the crossover thing. Our goal is for someone from Oaxaca to come and experience Oaxaca away from Oaxaca. Or for someone from L.A. to understand Oaxaca through our food—the colors, the ambiance, the people.

AC: Oaxaca is made up of a lot of different cultures too. Does the food differ a lot between cultures and regions?

BL: We only have food from the Zapotec region at Guelaguetza. We don’t have anything from the other six regions. If your culture is near the coast, you serve more seafood. Certain chiles only grow in certain areas. Moles change from region to region. The Istmo region cooks a lot with iguana. I wouldn’t even know what to do with an iguana.

AC: It’s so interesting because it does go back to the exhibition and what an important role geography plays with certain objects.

VL: In the exhibition, there are vessels from certain regions that would hold the chocolate or that you would drink liquor out of. Every object in the exhibition has a very specific functionality and different cultures had different feasting vessels. And we only know these uses because that is what is pictured in the codices. 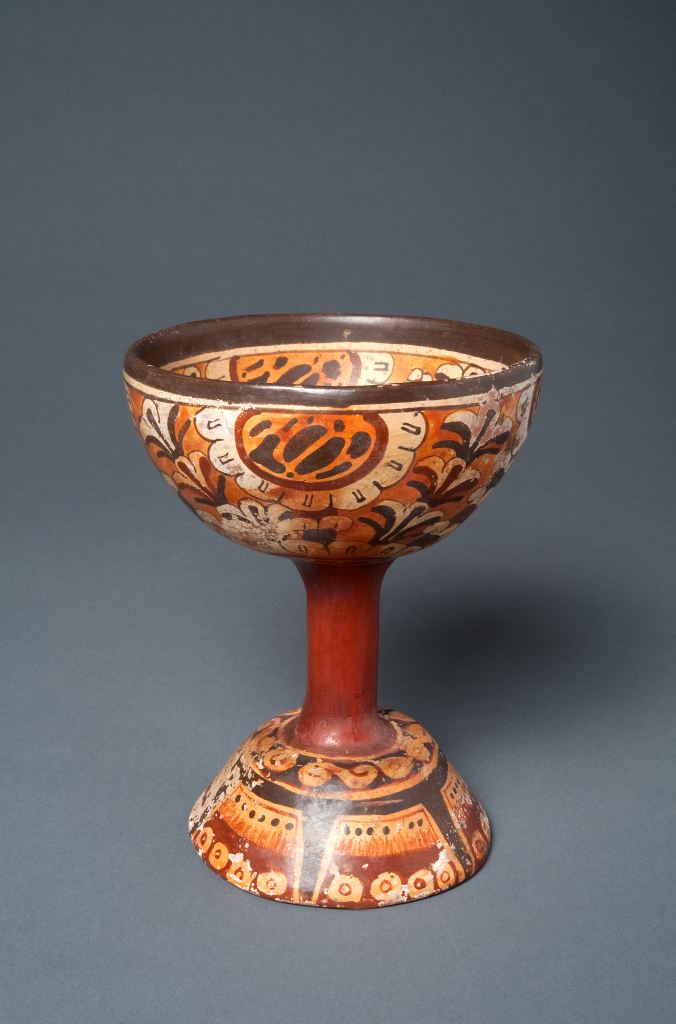 BL: It’s the same for mezcal. We actually use specific glasses at the restaurant. 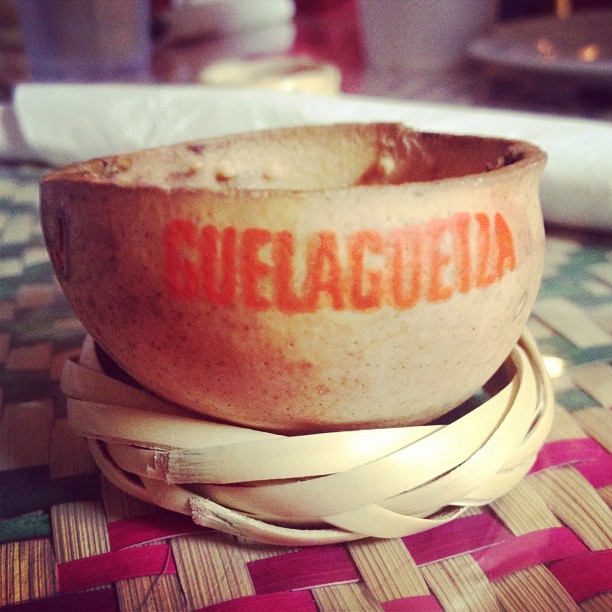 AC: Bricia, on your blog, you are doing a video project where you ask the question “What does Oaxaca mean to you?”

BL: When I went to Oaxaca last year, I took a camera, but I didn’t know what to do with it. So I started asking this question to people. And it was so interesting that people took the word Oaxaca very seriously. It was more than just the place they lived, it was where their soul was. It was what feeds them, inspires them, makes them.

AC: What does Oaxaca mean to you?

VL: I had never been to Oaxaca before starting work on this show, and I loved Oaxaca. Everything is just an explosion of creativity. Food, art, music. If you like design, everything is designed. From the food you are eating to the glasses you are drinking from. There’s such a strong connection to craftsmanship. Everything is gorgeous and interesting and diverse. It feels like it is vibrating—like it has a pulse. There is a creative history that pulses there, and it just has never stopped beating.

BL: It’s a place where I go, where I am at one with my soul.

This Sunday, learn more about ancient Mexican culture and food with two great programs. At 2 pm historian Xochitl Flores-Marcial explores the Zapotec tradition of Guelaguetza, which, in addition to being Bricia’s restaurant’s name, is one of several Mesoamerican indigenous rituals of reciprocal gift exchange. And at 3:30 pm, learn more about Oaxacan food culture at a book signing with Diana Kennedy, “the Julia Child of Mexican cooking.” Check out a video of Bricia and Diana Kennedy discussing Oaxacan food culture.