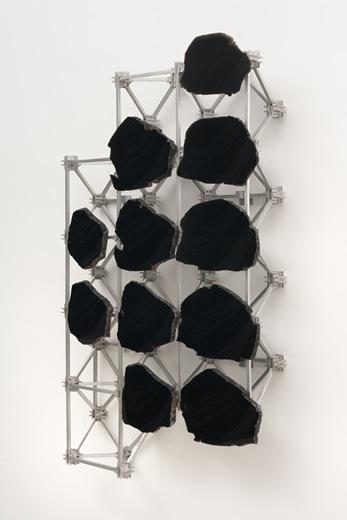 Since 1963—before our doors on Wilshire Boulevard were even open!—LACMA has been supporting young and emerging Los Angeles artists through an annual acquisitions program, originally known as the Young Talent Award and now called Art Here and Now. One-time up-and-coming artists like Chris Burden, Mary Corse, Tim Hawkinson, and Mark Bradford have all been YTA/AHAN artists. More recently AHAN has resulted in acquisitions by Ruben Ochoa, Steve Roden, Aaron Curry, Zoe Crosher, and Mark Flores.

Art Here and Now: Studio Forum is the latest iteration of this program. Members join this group and then, along with LACMA curators, visit a variety of artists’ studios around L.A. Following a dialogue between AHAN members and curators about the works, LACMA acquires new works to enter its contemporary collection. This year, five artists have had works acquired by LACMA through AHAN: Studio Forum—Mark Hagen, William E. Jones, Sanya Kantarovsky, Dianna Molzan, and Brenna Youngblood. 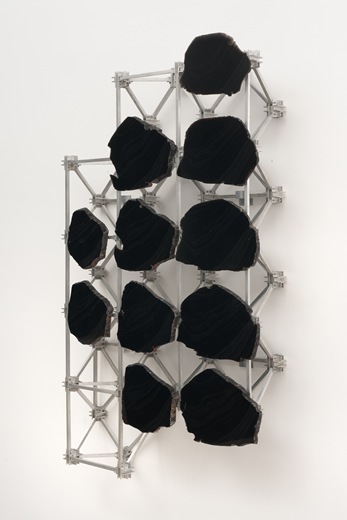 Mark Hagen draws inspiration from temporal and spatial contradictions and what he calls the “problem of orientation in a directionless field.” A key influence on Hagen’s work is Robert Smithson, whose own oeuvre displayed a fascination with geography, deep time, and a dystopian skepticism of technology. Hagen’s current body of work stems from an interest in amateur archaeology and serial forms borrowed from a minimalist vocabulary. To Be Titled (Subtractive and Additive Sculpture #8) is composed of slabs of obsidian that have been cut from a boulder and an aluminum frame of the artist’s design. Obsidian is a rock made when volcanic lava cools suddenly creating a hardened form while retaining an internal amorphous structure. This “material irony” is one of the attractions for Hagen, who is also fascinated by its multifarious symbolic and functional uses over the world—from Southeast Asia to the Americas. The obsidian slices or plates in To Be Titled are polished to a deep shine that further references the material’s uses as mirror in ancient Mexican cultures. He also alludes to Smithson’s notion of “mirror travel,” the collapsing of spatial and temporal references played with in his Yucatan Mirror Displacements (1969). 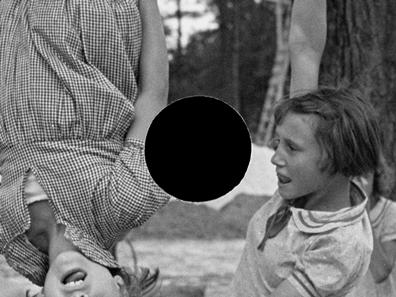 William E. Jones’ digital video Punctured gathers one hundred images from a vast cache from the Farm Security Administration’s photography program (1935–44), which famously depict rural and urban life in the Depression and is now archived and publicly accessible on the Library of Congress’ website. Jones singles out negatives that had been rejected, or “killed,” by Roy Stryker, the head of the FSA, who was not trained as a photographer but an economist. For a number of years, Stryker had ultimate authority over which of 145,000 negatives were printed; nearly half of the negatives made from 1935-1943 were rejected, including negatives by Walker Evans, Theodor Jung, Carl Mydans, Marion Post Wolcott, among others. Stryker’s physical method of rejecting negatives was to punch a hole in the negative—puncturing the image.

Working from this informal collection of “killed” images, Jones works with photo editing software to create thousands of details, therefore creating the impression of a manual zoom out of the central image—a punctured hole. Jones describes the work as a “movie” rather than an animation although it is a collection or agglomeration of thousands of still images that he edits to create the impression of a motion picture. 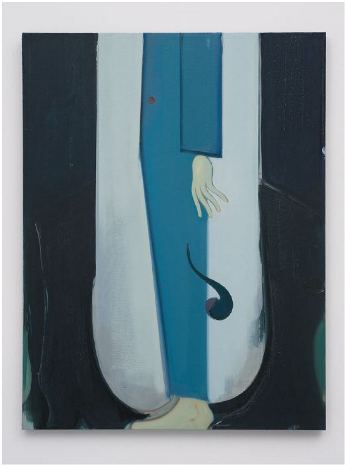 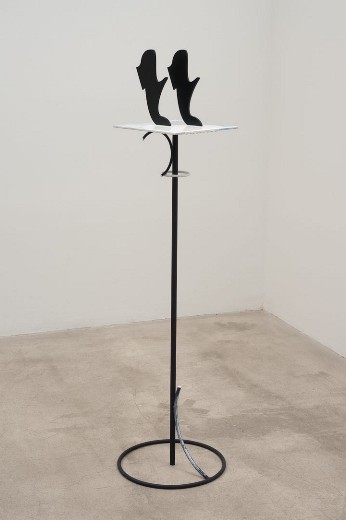 Sanya Kantarovsky spent his childhood in Russia before departing for his artistic education abroad. His current work is haunted by the aesthetic concerns of the Soviet era. The Third Librarian and The Man with the Black Coat are part of a body of paintings, sculptures, and drawings inspired by the writings of Soviet experimentalist Daniil Kharms. With economic and deadpan formal means, The Man with the Black Coat depicts a man in a blue suit with a pipe surrounded by two men in black coats—alluding to the forced disappearance of both Kharms and his writings under Stalin’s regime.

Kantarovsky uses a surrogate figure of sorts who bears a resemblence to the Monsieur Hulot character in the films of Jacques Tati. The Third Librarian isolates the nondescript shoes of this recurring character in another frozen moment that seems both comic and menacing. Through his use of isolated gestures and synechdocal elements, as well as his blurring of figure and ground, Kantarovsky combines and reconstitutes the art historical, literary, and personal references that populate his work. 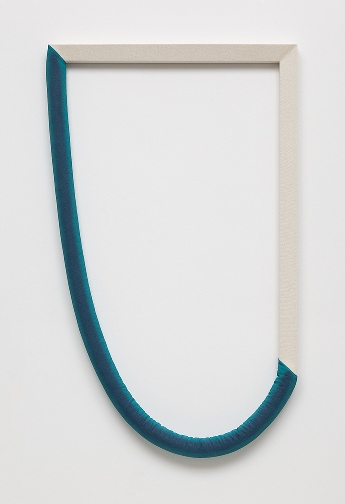 Dianna Molzan’s practice lies in recontextualizing the fundamentals of painting by manipulating traditional materials and framing devices. Using common material elements (oil paints and canvas) she incises, unravels, and reworks the painting surface, oftentimes only leaving the stretcher bars intact. Untitled (2012) retains one L-shaped corner of a painted frame, but the central area typically occupied by the painted canvas exposes the support wall. From the other corner, a U-shaped stuffed-and-painted canvas resembling a velvet rope hangs down and makes a fragile connection back to the frame. In this painting as in others, Molzan tests how far an artist can go before a painting becomes an object rather than a picture plane. 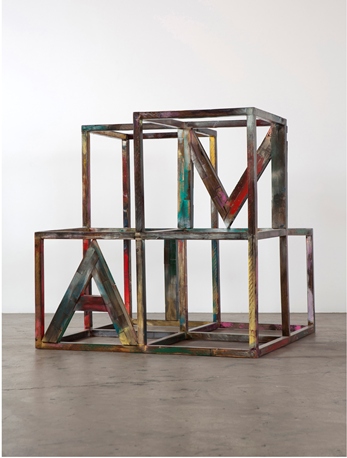 By 2007, Brenna Youngblood had abandoned the straight printed photograph as her medium of choice and began to integrate photography as source and surface material for her mixed-media paintings and constructions. Layering her own photographs of fragments of interior as well as figurative elements and eyes onto panels, canvases, and found surfaces, Youngblood’s practice became more painterly and abstract. Youngblood often incorporates elements from her personal archives, combining the subjective realm of personal souvenirs and recognizable cultural icons. Speaking about M.I.A., a large-scale, free-standing sculpture, Youngblood said, “When I was rummaging through old boxes, I found my grade school math book entitled Mathematics of Individual Achievement. I turned it over and on the back cover there was a logo design of a three-dimensional M.I.A., like a jungle gym, which became the inspiration for this piece.” The math book, in fact, became a point of departure for an entire recent body of work, which employs visual and material languages, arithmetic symbols, and equations.

Made of plywood in human-scale, or “jungle-gym scale,” M.I.A. invites circumambulation. Words and reading, such as “I AM” and “AIM” reveal themselves as a viewer interacts with the work. One may also see ‘missing in action’ as well as MIA, the popular Sri Lankan-British songwriter, singer, artist, director and activist, emerge as linguistic, figurative and cultural references. This is referred to as Youngblood’s “self-reflexive process,” in problem-solving, in relation to form, concept, and meaning.