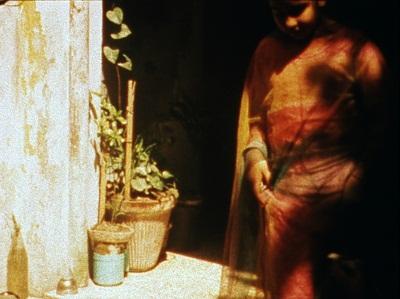 On Saturday, September 29, LACMA is presenting a special screening of selected works by artist Alia Syed in their original 16mm format, in conjunction with her exhibition Eating Grass, which can currently be seen in the Ahmanson Building. In between screenings, Elvis Mitchell, Film Independent at LACMA curator, will join Syed to discuss her work. We talked to Syed about the stories and inspiration behind Eating Grass. 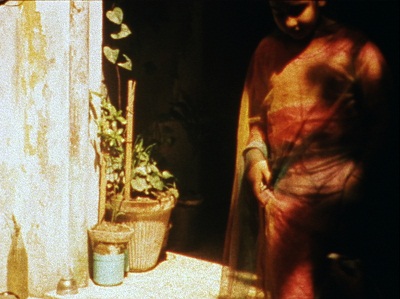 In what ways does Eating Grass reflect your ongoing interest in storytelling and language?

My stories develop out of lots of different things, but oral culture is very important to me. It is something that I grew up with. I am also interested in fairy tales, myth, and folklore as they are part of our shared experience.

I am interested in language; we construct ourselves through language; it creates the space where we define ourselves. Film can be a mirror—it can throw things back at us in a way that makes us question the ideas we have about ourselves and through this each other. What drove me to make Eating Grass in the way that I did was that I was interested in what happens when you hold more than one “culture” within you at any given time. It is a film about Diaspora. 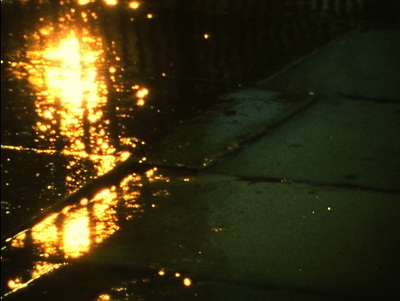 Why did you choose to organize Eating Grass around the Muslim tradition of the five daily prayers?

I had been spending long periods of time in Karachi all through the 1990s. On this particular occasion I travelled via Dubai and was woken up by the Azaan, the call to prayer. It was very beautiful and spiritual. A couple of days later I found myself in Karachi and was again woken up by the call to prayer, but this time it was not pleasant. It took me a while to decipher what was going on, but I eventually came to the conclusion that what I was listening to was not an actual recital by the muezzin but a tape recording, and the tape was becoming stretched, distorting the sound. I wrote a short story that used this idea as its central image:

Even the birds are rejoicing

How can the Muezzin climb so many stairs when they are so fat?

The generals are forcing the Maulvies to eat platefuls of luddoo's and if they can’t eat them they make the Muezzin eat them.

After prayer, back to sleep, perhaps the angels will send you dreams to guide you through the day".

The muezzin hasn't ascended the staircase

They have forgotten to renew the tape recorders and the people are either too fat or too thin to have noticed."

I then decided to write four more stories that related to the four remaining times of prayer. The stories are allegorical, based on a combination of family stories/sayings, newspaper articles, and daily observations about how people carried out there domestic routines. I was influenced by people like Italo Calvino, Jorge Luis Borges, and Salman Rushdie’s early work. In any Muslim country the times of prayer punctuate the day; they become axis points for reminiscing, governing secular and spiritual modes of being. I was interested in problematizing simplistic perceptions of these times. 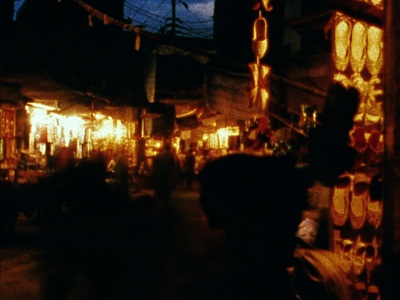 The title of your film, Eating Grass, refers to the famous remark made by Zulfikar Ali Bhutto in regard to the nuclear arms race with India: “If India builds the bomb, we will eat grass or leaves, even go hungry, but we will get one of our own. We have no other choice.” How does the title relate to the content of the film?

Eating Grass questions the implications of Bhutto’s statement on both personal and political levels.  More than anything, I wanted intimate that when two countries with a shared history exist in such proximity yet are continually pitting themselves one against the other, there will eventually be nothing left except to “eat grass.”

Eating Grass is a poetic capturing of the emotional rhythms created by the passing of sunlight; it follows previous work taking the form of a palimpsest, layers of voiceovers, written and aural forms where words are often treated as  visual phenomenon while visual images are offered as script to be deciphered. The title is another part of this layer—it embodies a multitude of meanings and associations.