Writ in Lacquer: A Genteel Courtship on a Mexican Sewing Box

Among LACMA’s growing collection of Latin American decorative arts is a fine Mexican lacquered sewing box, known as a costurero or almohadilla. The box is a hybrid creation of the colonial era: the lacquer technique predates the arrival of the Spaniards in the fifteenth century, but the form and function is essentially European.

Lacquer, known as laca or maque (from the Japanese maki-e) in Spanish, dates back to the pre-Columbian period when it was predominantly employed to decorate gourd cups. The technique consisted of mixing oils made from both plant and animal sources with dolomite (calcium magnesium carbonate) or earth rich in lime. Aje oil was produced by boiling a type of female scale insect, similar to cochineal, to collect the fat that gathered on the surface of the water. It was then mixed with either chia or chicalote oils derived from the seeds of the sage and poppy plants respectively, to thin the lacquer and speed its drying time. In this, Mexican lacquer was distinct from the Japanese one, which was made exclusively from plant sources. 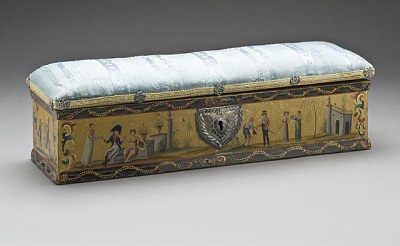 After the arrival of the Spaniards, lacquer was redeployed to decorate furniture and decorative objects, in part because it was more affordable than imported polychrome-ornamented furnishings, but also because of the fashion for Asian lacquer (and other objects) introduced to the colony through ongoing trade with the East beginning in the sixteenth century. Colored lacquers were made from mineral and plant sources in red, orange, yellow, green, blue, black, and white. Different techniques were employed in the decoration of objects and varied somewhat by region. A common method, referred to as “inlay” work, consisted of incising the ground layer of lacquer and carving away certain areas, which were then filled with colored lacquers to create figures and other decorative elements.  Other artists simply applied colored lacquers to the surface with a brush. LACMA’s sewing box is painted and gilt. 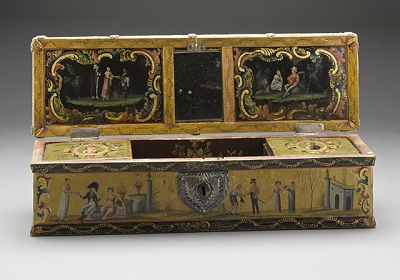 This sewing box was made in Pátzcuaro (Michoacán), a region that was famous for its lacquered bateas (deep trays) and costureros, among other objects. (Guerrero was another area known for producing some of the finest examples of lacquer objects.)

Many of the works created in colonial Mexico include typically European subjects. The front of this sewing box, for example, depicts a fête galante (a garden party of the idle aristocratic class) with an officer and a lady relaxing in a garden, as another figure offers alms to the poor. The underside of the lid shows scenes of courtship: to the right a woman is pursued by a suitor strumming a guitar, surrounded by gold rococo flourishes; and to the left a criollo (Creole) man, wearing a sumptuous cape and hat, and an elegantly dressed woman are tended to by an indigenous servant.

The reverse of the box features a battle scene of men on horseback, which presumably includes the officer depicted in the front.  The depiction of the officer on the front, back, and left side, as well as the inclusion of the woman in pink (the object of his affections) throughout the box creates a pictorial narrative of their courtship meant to amuse the viewer.

In the eighteenth century, when Mexico experienced an economic boom, the upper sector of colonial society increasingly acquired furniture and decorative objects imported from Europe, which eventually affected the production of local lacquerware and furnishings. By the late colonial period, lacquerwork was mostly used to decorate small and more intimate objects such as LACMA’s sewing box. This type of box was probably employed by wealthy Mexican women and professional seamstresses, and was often tailored to its owner’s specifications. Occasionally, too, they included portrait roundels, often located on the lids of the inner compartments. LACMA’s sewing box includes an image of the woman in pink on the left inner compartment, and on the right, the suitor from the box’s other vignettes. At the bottom of the central compartment is a third roundel, depicting the couple’s child.  These images are probably not actual portraits but stylized figures typical of European courtly imagery.

Lacquer has been in continuous production in Mexico for more than two thousand years. LACMA’s box is a fascinating example that combines local traditions and the taste for Asian goods, especially in the inclusion of the floral motifs and weeping willow on the front, as well as the red background in the interior.  The costurero is on view now in the Latin American collections on the fourth floor of the Arts of the Americas building, and it is well-worth taking a closer look at it and all its details.