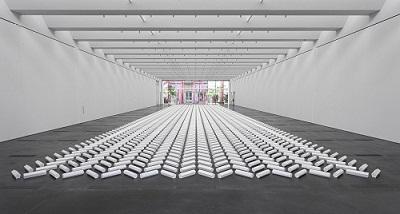 It is such a rare treat to see Walter De Maria’s work in person. I hear he has been wandering around LACMA quite a bit. He came for an inspiring if underground visit in 2010 when the Resnick Pavilion was not quite open, installing The 2000 Sculpture in its luminous space, which allowed the work to float. And I caught sight of him in one of Michael Heizer’s photographs on view in BCAM, just the other day (he is featured, unidentified and with his back turned, in one of the photographs included in Michael Heizer: Actual Size). Inspiring and underground—could there be better words for De Maria, who continuously insists on the power of art and creates  ways to encounter it? 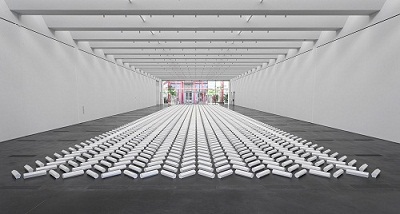 Now The 2000 Sculpture is installed in the Resnick Pavilion again, this time open to the public. It fills the space of the pavilion in a grand horizontal gesture that activates and pushes against the architecture. Immediately engaging the viewer, it asks her for a slow consideration of its patterns, which are visually discernible, but quite difficult to pin down. Do we all stand at the end counting sides trying to get a handle on it? Or do we allow our vision to rest and wander in a more ambiguous appreciation of the form? No understanding of the pattern (5 7 9 7 5-5 7 9 7 5) could ever describe an experience of the work. No photograph can capture its form. This resistance to the translations of criticism and photography has been De Maria’s point all along: that we engage physically and mentally with the presence of art and its ensuing complexity. “No matter how pure I try to be, something always enters in, a streak of non-purity,” De Maria said in 1968.  “It’s at that point where warm meets cold, action meets inaction, that’s what interests me. And what goes on in people’s minds.” 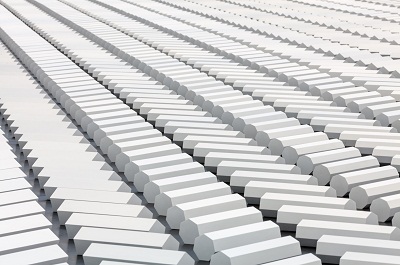 The 2000 Sculpture may allow us to think of purity because of its meticulousness, and with this we should all be impressed; but its mathematical formulations also echo with time, history and thus, I suppose, death. De Maria has more than once alluded to this central theme of life (and death). Looking out over the work’s herringbone puzzle, I see resonances with military airfields, airstrikes, and cemeteries as easily with the patterns of the ancient I-Ching, (in relationship to which De Maria has also made work). But it is not about any of these things. They are already part of our formal, social, and visual space, and his art asks us to engage with it. Enjoy.