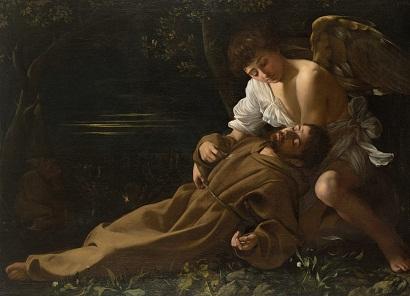 Caravaggio in Our Time

Opening Sunday (member previews start today), Bodies and Shadows: Caravaggio and His Legacy is a major exploration of the “Caravaggisti”—a generation of diverse painters throughout Europe in the seventeenth century that was influenced by Caravaggio’s style. The exhibition brings together more than fifty works, including an unprecedented number of paintings by Caravaggio himself, which have never before been shown in California. 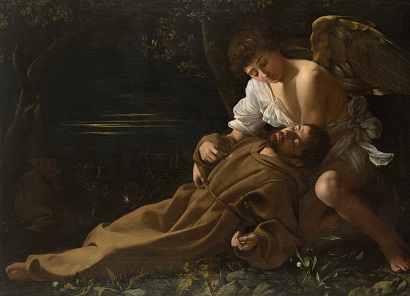 The fame of Caravaggio (1571–1610) is a relatively recent one. One hundred years ago, a list of the greatest painters of the Italian school would not have included his name. Raphael, Michelangelo, Leonardo, or Titian were considered then to be the pillars of Italian painting. Yet today Caravaggio has become an artist whose works appeal to a large public. In Rome, where many of his greatest paintings are kept in churches, tourists line up to admire them, as they do the Sistine Chapel or the great Baroque sculptures of Bernini. His paintings captivate and engage us in a way few others from that period do. Suddenly, a painter of the late sixteenth and early seventeenth centuries seems to speak our language, share our passions. Even if the subjects he represents do not stray from the classical canon of religious iconography, his models are clearly made of our flesh and of our blood. He is, in other words, a painter of our time.

This is also how his contemporaries reacted to his works and this is also why, no matter how successful and influential he was, his paintings ultimately went out of style and were to a large extent forgotten: other modes of representation came into favor and eclipsed what we recognize now as a true revolution in Western painting. Offsetting the neglect of centuries, no other seventeenth-century artist has triggered more publications in recent years than Caravaggio, ranging from scientific books and articles to detailed biographies. Furthermore, Caravaggio’s recent fame was enhanced by the creation of an almost mythical hero, the subject of novels and films, whose life became in the popular imagination the code that was essential to decrypt the novelty and complexity of his images. Sex, violence, murder, a life on the run—which, it should be noted, were elements Caravaggio shared with quite a few other artists of his time—obliterated the more sobering image of an incredibly ambitious artist, arriving young in Rome and working his way through the competitive world of patronage, obtaining commissions from powerful prelates and dedicated collectors. It is well known that those who owned his paintings prized them more than others in their collections: often copied, they were rarely traded, or if so, at consequent prices. Much has been speculated about the taste of these collectors and their reasons for favoring Caravaggio. One thing is certain: the beauty of his compositions struck his contemporaries as it still strikes us today. 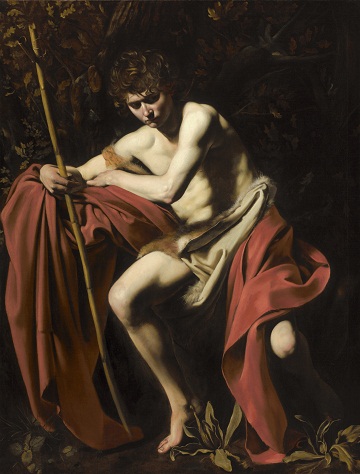 That beauty is owed essentially to the surprising ability of his paintings to create within the spectator a sense of expectation. Whether looking at a Caravaggio portrait or religious composition, the viewer is made aware of an immediacy seldom experienced until then in painting. A prelate, sitting on a chair, is not just shown as an image of power but rather caught in a moment as he just closed a book to reflect perhaps on the significance of a sentence, or just because an outsider called. Open mouths, a twist of the body, disquieting gazes all indicate an action suspended in time as if something had just happened or is about to happen. The naturalism of his compositions, then as now, seemed to bridge a gap between art and life, to use Robert Rauschenberg’s expression, and their novelty was quickly adopted first by a host of artists active in Rome and later by artists in other parts of Italy and Europe. The Caravaggesque revolution and the variety of responses it brought on the part of individual and original artists is the story told in Bodies and Shadows: Caravaggio and His Legacy.

As shown in Bodies and Shadows, which brings eight works by Caravaggio to Los Angeles for the first time, the artist’s career, in spite of taking place over a span of just more than fifteen years, is far from being uniform. His Portrait of Maffeo Barberini is a work recently recognized as autograph (and previously exhibited only twice, in 1861 and 2011) and displays some characteristics of Caravaggio’s early work, such as the delicate still life in the foreground, a decorative element that Caravaggio used on several occasions but that disappeared from later, more mature works. In Saint Francis of Assisi in Ecstasy and in Saint John the Baptist in the Wilderness, a strong and focused lighting gives the figures a physicality that had not been experienced until then. After 1606, when Caravaggio, accused of murder, fled Rome and escaped to Naples and Malta, he continued nonetheless to paint, but the mood of his paintings changed once again. Salome Receiving the Head of Saint John the Baptist, The Denial of Saint Peter, and the extraordinary Toothpuller illustrate a more somber mode with enhanced chiaroscuro effects and, in the latter painting, a surprising and new approach to genre painting. 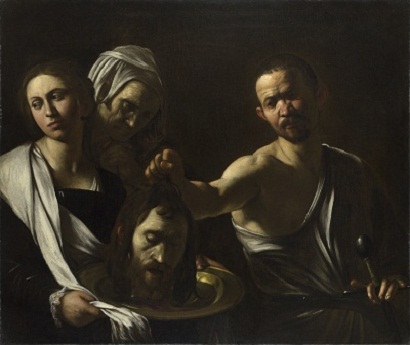 Caravaggio did not run a studio, as many artists of his time did. His unorthodox approach to painting (without the help of drawings), not to mention the artist’s notorious eccentricity and irascible character, was not conducive to training young students. Those who came too close to him, such as Giovanni Baglione (c. 1563–1643), got notoriously burned like a moth too close to a flame. Other artists, part of a restricted group close to Caravaggio in Rome, were more successful, entertaining a respectful distance, both physical and aesthetic, from the master. Among those, Orazio Gentileschi (1565–1639) and Carlo Saraceni (c. 1579–1620) are the most salient figures. Both artists used themes familiar to Caravaggio and borrowed from him a sense of drama as well as effective contrasting effects of light, notable examples being Gentileschi’s Judith and Her Maidservant with the Head of Holofernes and Saraceni’s The Martyrdom of St. Cecilia. 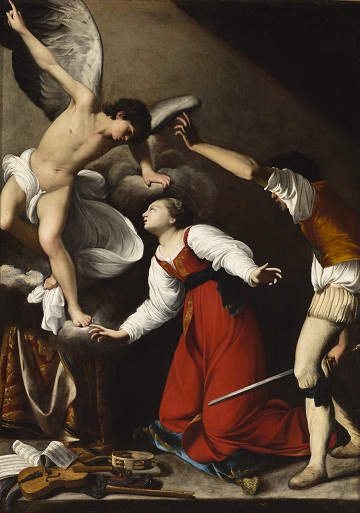 Caravaggio died of malignant fever in Porto Ercole in 1610, as he was trying to return to Rome. His death, rather than bringing an end to his fame, marked a surprising development of his style, or aspects of it, in the hands of a variety of artists of different origins and styles; what they have in common is a repertoire of images, a similar vocabulary of gestures, and a taste for dramatic effects.

To a certain extent, the style was codified by the prolific Bartolomeo Manfredi (1582–1622), who diffused with great sensibility the manner of Caravaggio, developing it in new directions and creating a repertoire of subjects that borrowed from Caravaggio a predilection for cropped compositions.

The genre appealed to and was in turn influential on artists, many of whom were French, including Valentin de Boulogne (1591–1632), Nicolas Tournier (1590–1639), Nicolas Régnier (1591–1667), who made a specialty of such representations. Besides Manfredi, other models were available to the young  artists who gravitated toward the Caravaggesque milieu. First and foremost the works of Caravaggio himself, many of which were visible in Roman churches and widely accessible collections, provided an example for ambitious artists to adopt a grand style, the most eloquent of whom being the French painter Simon Vouet (1590–1649). José de Ribera (1591–1652), Spanish by birth but active in Rome and Naples, also played a considerable role in disseminating Caravaggio’s lessons. 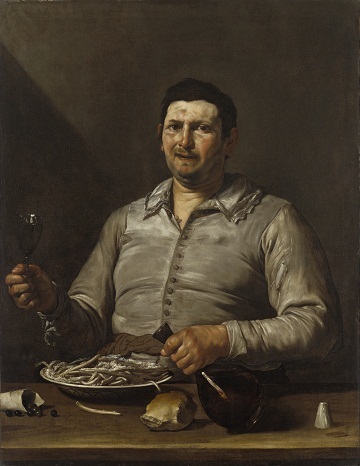 The Dutch, even more than the Flemish, embraced Caravaggism. This may not be as surprising as it seems: the art of Caravaggio itself had been nurtured by northern sources. The engravings of Lucas van Leyden and the still lifes of Breughel that were available in Milan during Caravaggio’s formative years had an influence on the artist, which may have been recognized by some of Caravaggio’s Dutch followers. Furthermore a long-established tradition made northern artists travel to Rome where their community was well established.

Gerrit van Honthorst (1592–1656) acquired an Italian nickname, “Gherardo delle Notti,” in recognition of his ability to depict darkness and night, brilliantly executed in The Mocking of Christ, and Matthias Stom (c. 1600–after 1652) remained in Italy his entire life, eventually settling in Sicily. Many of these artists were originally from Utrecht (and many returned there), a city with a strong Catholic minority that enjoyed a privileged relationship with the Papacy. 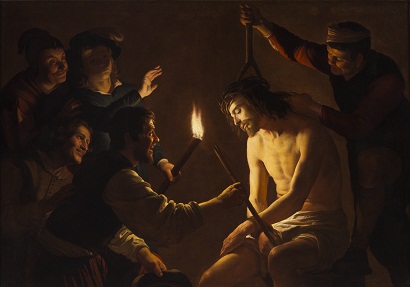 If Caravaggio is a rediscovery of recent art history, so is Georges de La Tour (1593–1652), a mysterious painter from the Lorraine whose relationship with Caravaggism is visually evident but cannot be explained entirely. It is not known whether he went to Rome or saw works by Caravaggio himself, but it is probably unlikely. As Caravaggio often translated into his powerful religious images the new kind of devotion prescribed by the Church after the Council of Trent, so did Georges de La Tour express in his own paintings, such as The Magdalen with the Smoking Flame, a private and complex spirituality that defines religiosity in seventeenth-century France. Both artists use realistic images and models, thus making the divine part of our daily life. Both artists delve into the narrow space between reality and representation, which, significantly, is the domain of the stage. Indeed, theatrical gestures, costumes, and situations that were always present in Caravaggesque compositions became particularly prevalent. Painting later in the seventeenth century—and often geographically remote from Rome—accentuates this original aspect of Caravaggio’s work and continues his legacy.