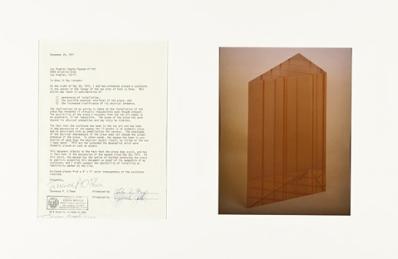 Art in the Tar Pits and other "Lost" Works

In 1970, artist Terry O’Shea mailed a letter to curators at LACMA describing both a gift and an action. O’Shea had been the 1966 recipient of the Young Talent Award (an honor that has for nearly four decades taken the form of prize funded by the Modern and Contemporary Art Council and more recently as an acquisition fund in the guise of AHAN: Studio Forum), and was contacting the curatorial staff to alert them to the work he had produced for LACMA as part of the terms of the distinction. O’Shea made a cast-resin sculpture with colored striations that was indicative of his Light and Space–leaning work—and then threw it unceremoniously into the La Brea Tar Pits.  The letter and a black-and-white photograph of the sculpture are now part of the permanent collection. 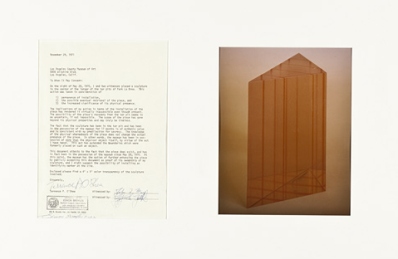 Terrence O’Shea, Documentation of the Artist’s Act of Placing One of His Sculptures in the La Brea Tar Pit, 1971, Modern and Contemporary Art Council, New Talent Purchase Award

As I was working through LACMA’s database and moving through the museum’s various storage areas in preparation for the new exhibition Lost Line: Contemporary Art from the Collection, I thought often about this “lost” object in the collection. What does it mean to “collect” something that is submerged in the primordial soup next door? At the same time, with the frenzy of interest surrounding Michael Heizer’s Levitated Mass (and a new wave of scholarship around Land Art), I found myself gravitating to works in the collection that considered location, from the underground to the aerial, from street level to the global stage.

Many land artists, including Michael Heizer, used methods of removal, burial, and displacement to create site-specific pieces, often of monumental proportions but with different intentions than the traditional forms of monuments (as memorials, e.g.). All this made me think of Gabriel Orozco’s witty alternative to the monument, a work in LACMA’s collection called Lost Line, from which the exhibition takes its name. The artist once described this piece as “the opposite of a static monument… a sculpture as a body in motion”—a notion that reinforced my approach and challenged me to think beyond the usual suspects associated with earthworks. 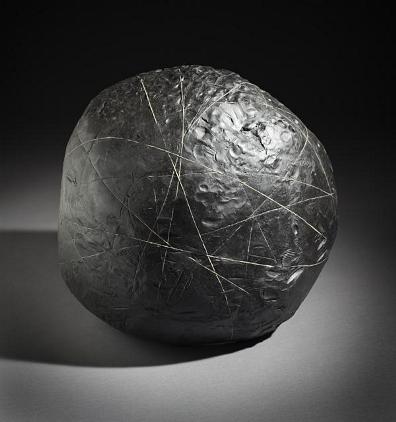 Lost Line, the exhibition, is therefore not organized by chronologies or movements but by a more freeform sensibility that invites associative or lateral meanings. I wanted to consider Buckminster Fuller’s print of his cartographic innovation, the Dymaxion World Map, in relation to Dennis Oppenheim’s Removal Transplant-New York Stock Exchange and James Welling’s “foil” photographs. The small-scale sculptural constructions of Barbara Kasten which result in obtuse architectural studies could dialogue with Yunhee Min’s gallery intervention—a hybrid painting, sculpture, and architectural construct.

As has happened in my previous curatorial endeavors, I connect to works that bring the outside elements inside the galleries. Thus whether in the stains and spurts of Ingrid Calame, the drywall of Pablo Rasgado, or the rebar faux ficus trees of Ruben Ochoa, there is an invitation for the tar to seep up through the gallery floors. Maybe, just maybe, O’Shea’s work will finally resurface.