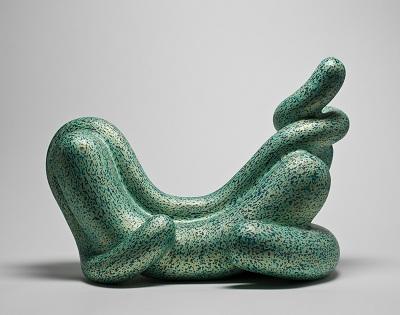 The Wonders of Zizi and Ken Price Sculpture: A Retrospective

Shamefully, I must confess that I hadn’t known about Ken Price or his work except upon entering the Ahmanson Building one day and finding, to my surprise and utter delight, Zizi. I had never seen a sculpture quite like it.  It seemed utterly unique and was both large and small at the same time, as its curvaceous forms reached up and settled but also somehow stayed in motion. Its color seemed to emerge from the sea itself. 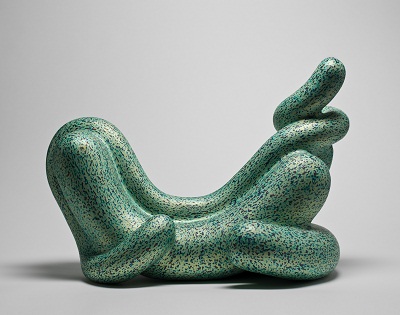 The pleasure of discovery was rewarding, and the disgust of not having known of such a talent was appeased by the opening of the simply marvelous retrospective Ken Price’s Sculpture: A Retrospective, organized by senior curator and department head of modern art, Stephanie Barron, and designed by renowned architect Frank O. Gehry.

Having spent the spring in London in the presence of Henry Moore’s Large Forms at the Gagosian Gallery, with their weighty shadow of World War II somehow invested into the lugubrious patina of dark beauties of caramel bronze or copper alloy green, it was a shock to come upon a form, not totally at odds with Moore but ever so different. Zizi was a revelation. To quote Robert Irwin, “The art is what has happened to the viewer.” 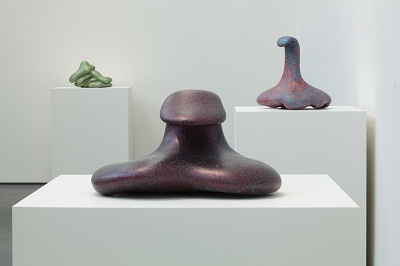 Ken Price’s worldview that I sense in this one piece seems to stem from unrelenting optimism, or maybe it was his Ferus generation of artists, or his joy in the sheer tactile touch of his chosen material—clay—and treating that material as if it held secrets. He was, it seems to me, remaking the world in some primal matter, or at least reconsidering its possibilities. From Moore’s black-and-white era to Price’s bright Technicolor modernism, the world is positioned within a different future/present—a wisdom that’s a lot like jazz, improvisational and unexpected.

The exhibition starts at the end, for want of a better phrase. His last forms, like the top of a mountain, become our adventure.  And in that sense it goes backward through art history itself—abstraction and freedom through a portal of discovery.  We observe each extraordinary piece as moments of beauty and investigation. Some are as if they fell from a great height and were petrified and colored by the gods, while others seem to have oozed from a molten underworld. 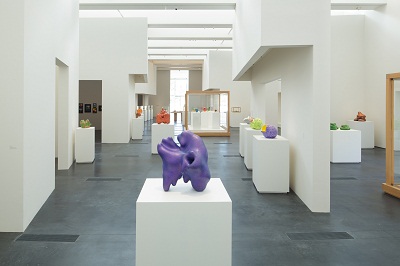 But in truth, in Ken Price’s hands they are as the very nature of the clay itself: open to infinite states of being. You see the work blossom like flowers in ecstatic profusion of some bright eternal spring.  With years of refining the colorations toward perfection, a palette so varied that I choose not to name and that we only sense as somehow inevitably perfect.  And yet it’s playful! But not without mystery.

He’s certainly having fun as the shapes and the colors zing and zap their flashy forms as moments of surprise. Price seems to be prepared to make us puzzle over the outside and be amused by the geometry on the inside, and yet in the black orifices there could be a sinister eye or a mouth or some mysterious window. Color, like some devious insect—a decoy? 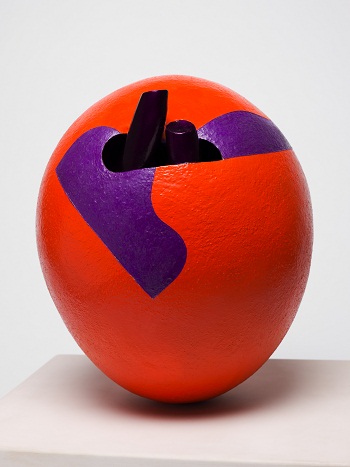 As we walk backward through the history of his clay, we enter architectural, hard-edged pieces, smaller in scale but no less dreamy in their otherness, in the cleverest sense. And then we are presented the eggs, whimsically colored, always cracked and revealing stranger forms inside oblique orifices, ruptures, and gashes, where their beauty resides in attraction and repulsion. Only in the giant bronze pieces, Ordell and Yogi, is Ken Price’s humor overwhelmed by the surrender to the grandeur and seduction of form itself. Restless, he seems to be on another journey.

And finally we find ourselves in Taos, New Mexico, with cups, bowls, plates, and other curios. And yet on close examination what we really sense is an artist lovingly honing exquisite skills with the quirky realism that so beautifully characterizes his later and larger works. So clearly, he never lessens his joyous palette or the ironic fun that the clay offers at each slippery touch and at every vague impression foretelling at each moment its own future.

Ken Price Sculpture: A Retrospective is on view through January 6, when it will close and head to the Nasher Sculpture Center in Dallas, followed by the Metropolitan Museum of Art, New York.