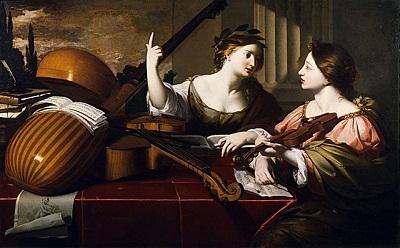 Divine Inspiration: Music in Works by Regnier and Watteau

LACMA’s galleries are full of music references in painting and sculpture. Music, this highly subliminal sensorial awareness, is surely a thing that acts upon us and within us. It is something like the air we breathe and yet we can create it. And it, in that sense, is nothing like air, more like a language snatched from the air at its most precise tonality. It haunts our presence and, in a very real sense, defines existence like none other. We could with little effort hear bebop jazz in abstract expressionism, the hip-hop in Glenn Ligon and conceptualism, or punk and the Beatles in pop art—in all of which the music bestows on those artistic moments a visceral reality that mere looking fails to suggest. But music, any music, and maybe all music has that universal sweet center that can bleed through time and offer a portal to the past. Nothing more beautifully powerful liberates the past than music. Out of curiosity, I was fascinated by two wonderfully evocative pieces of art, a hundred years or so apart. 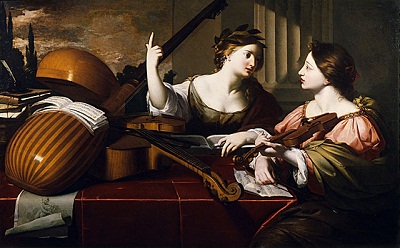 On the third level of the Ahmanson Building is Divine Inspiration of Music, a 1640 painting by Nicolas Regnier, a Flemish artist who worked in Baroque Rome in the style of Caravaggio, whose agent was also Regnier’s agent. Many of his genre paintings that were created while the artist was in Rome were of the same subjects imbued with the melodramatic chiaroscuro so typical of Caravaggio’s art. In 1625, Regnier would move to Venice. Gone was the artful gloom of Rome, and those once-shadowy figures were to become bright and decorative with a lyrical frisson.

Venice then was known as the “Republic of Music,” and, as reported by a tourist, “in every home someone is playing a musical instrument or singing.” Operas were the dominant form, lush and fantastic, an occasion of wonder. The giant was Claudio Monteverdi, whose opera The Coronation of Poppea thrills audiences even today, and there was also Francesco Cavalli and Benedetto Ferrari. Here the instrumental ensemble would come alive and be celebrated.

The ensemble in Regnier’s exquisite brush casts the details of his Divine Inspiration of Music, with its two ladies and sheets of music, two violins, viola, long-neck lute known as a theorbo, and possibly a half-hidden chitarra italiana, a sort of mandolin. Regnier beautifully renders these instruments to such a degree that he captures the dynamic vigor of this almost-lost world of music. 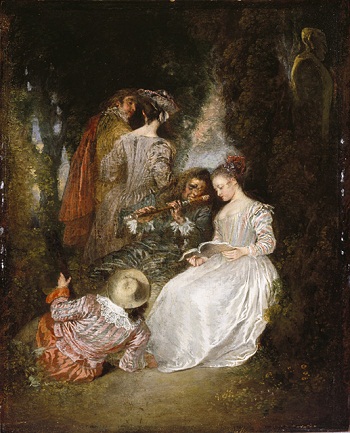 Jean-Antoine Watteau, The Perfect Accord, 1719, gift of The Ahmanson Foundation

Also on that level of the Ahmanson Building there’s a wonderful atmospheric painting by Jean Antoine Watteau titled The Perfect Accord. Painted in 1719, it was of eighteenth-century rococo France, where opera was still the major musical form. This was the time between the majestic Louis XIV and the indulgent Louis XV. There was Scarlatti, Francois Couperin, LeClair, but Watteau’s true love was the Italian Commedia dell’Arte.

His passion for music and particularly Mezzetin, the wistful prankster, led to his pastoral genre known as fête gallante, i.e. pleasure seeking.  Here the theme of music as “the food of love” is a central motif of his art. In shimmering pastels of wittily amorous intimacies, Watteau expresses a sinuous lightness and weaves a divine poetic tenderness that would forever define rococo art.

There was always a playful commentary where buffoonery and cultural norms had a whimsical twist. If you peer deeply into The Perfect Accord, you can almost enter the amorous gathering of the strolling couple in which the man stares back at three people in the foreground or at us, the voyeurs. One can almost hear the flautist and imagine a romantic, birdlike ditty played trippingly along, a dell’Arte whimsy effortlessly dancing among the greenery, while the sheet music is held by a downward-facing lady in a white luminously radiant, satin gown, with a theatrical vividly striped pink-and-blue-costumed man at her knees. Watteau died young and would be declared one of the greatest French artists of the eighteenth century.

Though on so many levels it’s impossible to breathe in the sweet air of music, like so much vaporous blood within these sparkling, hypnotic images, we must, in our stillness, know they contained the one third-person witness, this thin ectoplasmic trace of our shared heart strings.