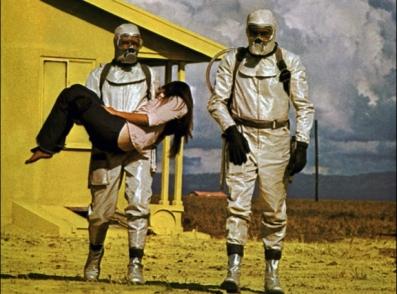 In conjunction with Stanley Kubrick, LACMA is screening the film series Beyond the Infinite: Science Fiction after Kubrick. This Friday you have the chance to see Saul Bass’ one and only foray as a feature film director, Phase IV—including its “lost” ending. As a special to Unframed, Sean Savage, film archivist at the Academy Film Archive, traces the origins of Bass’ film and its psychedelic conclusion.

In the studio where the movie is being shot, a small boy leaps up joyfully 20 or 30 times from a pool of heated water against a blue sky background, as the slow motion cameras roll. This is part of the montage epilogue, which shows man being born free and living free. Bass and company are a couple days over-schedule, but Paramount loves the montage idea, so it’s okay.

A year later this abstract ending—which earned comparisons to 2001: A Space Odyssey in early notices—was cut almost entirely, vanishing from public view for nearly four decades. It would be Saul Bass’ only feature film, made in the middle of an accomplished career as a graphic designer, short film-maker, and probably the closest thing to a household name in the craft of movie title sequences (for the likes of Alfred Hitchcock, Otto Preminger, and Martin Scorsese). Upon its release, Phase IV was met mostly with indifference from audiences and only a smattering of favorable reviews. Bass had to compromise many things on the film, and was completely shut out of its marketing—ironic for a man so accomplished in poster design, and the fact that executing such campaigns was his first job in Hollywood. 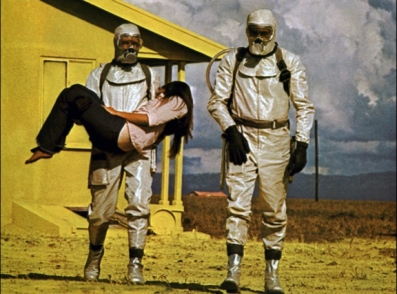 Shortly after Bass’ death in 1996, his family donated his personal papers and film holdings to the Academy of Motion Picture Arts and Sciences—storyboards and other original artwork, as well as production files and correspondence to the Academy’s Margaret Herrick Library, and a wealth of film material to its Film Archive—all together a stunning monument to more than a half century in the business. Processing a collection of this scale is slow, painstaking work, so while the easily identifiable material was promptly inventoried, many more items requiring further investigation were put on hold.

Meanwhile, Phase IV had slowly gained more admirers over the years, and lead actor Michael Murphy introduced a screening of the released version at the TCM Classic Film Festival last April. He spoke of an absent sequence visualizing the next evolutionary “phase” of mankind as “brilliant, psychedelic, fabulous stuff.” Keen-eyed fans noticed some of this imagery in the theatrical trailer that was not seen in television airings or circulating prints.

In June 2012, the Los Angeles non-profit moviehouse Cinefamily was about to launch a full weekend of Saul Bass programming, including a well-worn 35mm distribution print of Phase IV. The Academy Film Archive had been advising on programming, simultaneously looking for quality screening materials as well as finishing the processing of the collection. Serendipitously, a faded reel of the original Phase IV ending was found in the Academy’s holdings, and with the Bass family’s blessing, was quickly added to the program. Though other changes were made to the preview version to arrive at the theatrical edit, the film’s tour-de-force—as pure an actualization of the imagination that’s ever (almost) made it to the screen—was Bass’ phantasmagoric epilogue. Happily, the original elements weren’t truly “lost” either, but were safely intact in Paramount’s holdings, quietly waiting to be rediscovered.

The reported early confidence in the film from the production set was short-lived, and battles with the studio are evidenced in surviving correspondence in the Saul Bass Papers. Notes in Bass’ own hand document a phone call with then studio head Robert Evans and their conversation about poor preview responses and possible solutions. Legend suggests the movie was taken away from him, though Bass remained directly involved in the reediting of the film. While still shooting a year earlier, Bass was asked about the film’s prospects, and the already seasoned veteran soberly noted: “Today a film either takes off or it dies—but dead. It opens its mouth and never gets a word out.” Not unlike the themes of rebirth played out in the conclusions of both 2001 and Phase IV, the latter movie might enjoy a new life after all.

A new 35mm print of the theatrical version of Phase IV, followed by a digital presentation of the reconstituted original montage ending screens in LACMA’s Bing Theater on Friday, March 22 at 7:30pm. Print and DCP courtesy of Academy Film Archive, with thanks to Paramount Pictures.