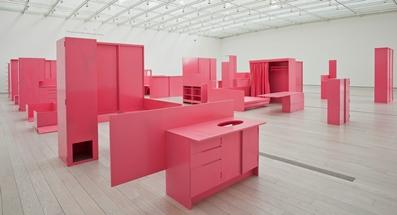 It’s 1980s Los Angeles. Nighttime. Stephen Prina and fellow artist Christopher Williams walk along La Brea Avenue—yes, people do walk in Los Angeles—and a pink shape in a glowing storefront display catches their attention.   Unable to identify the object, they approach the store and discover the puzzling unit is a desk designed by Austrian architect R.M. Schindler.  Something feels odd about the desk, and the artists soon learn it was once built-in to a Schindler house; but, having been removed from its original architectural context, the desk has been painted pink and is now presented, awkwardly, as a freestanding object.

Looking back on that noteworthy discovery nearly three decades later, Prina says of the desk, “it appeared to us as an amputated limb.” Thus the seed was planted for Prina’s installation As He Remembered It, opening as part of his solo exhibition in BCAM and in the Pavilion for Japanese Art. The exhibition is open to members starting today, and opens to the general public this Sunday, April 7. 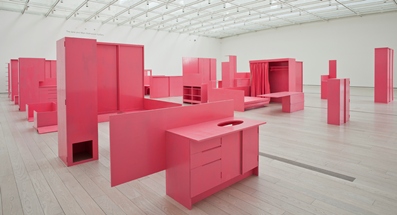 In preparation to make the installation, Prina selected the Schindler-designed residences of Mrs. George (Rose) Harris and Hilaire Hiler, constructed in Los Angeles in the 1940s. Both homes have since been demolished.  Using surviving plans and photographs, the artist produced replicas of the built-in furniture, which were placed according to the lines of the room.  The resulting installation consists of twenty-eight objects that the artist first stained and then painted pink, more specifically Pantone Honeysuckle 2011 Color of the Year—a self-touted “brave new color, for a brave new world.”

The effect of As He Remembered It is ghostly.  Closets, sinks, vanities, couches, a piano, and a stairway to nowhere occupy the space; they are arranged neatly in a grid pattern, but their incongruous shapes and symptoms of wear and tear, what Prina refers to as “patina,” betray their tidy presentation.  The slipshod application of paint drips and thickly pools on some surfaces yet remains scarce on others, revealing hints of color that suggest the objects’ previous existence. 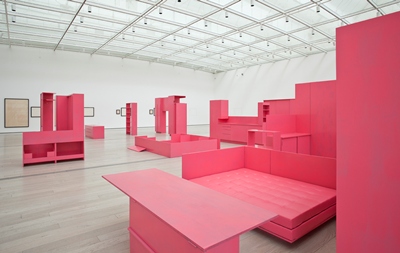 If, as Prina says, the objects can be likened to amputated limbs, it’s easy if not natural to feel the phantom sensation of architectural absence.  Although the furniture is firmly rooted to the ground, each piece somehow feels suspended in space, in time, or perhaps in the artist’s memory. Yet, we must remind ourselves that as replicas, these objects were never built-ins and that phantom sensation likely represents our own projections of the objects as furniture rather than the objects as objects.  Ceci n’est pas un placard.

As He Remembered It was originally exhibited at the Secession in Vienna, the hometown of Schindler who later emigrated to the United States and ultimately settled in Los Angeles.  LACMA’s exhibition celebrates a homecoming of sorts for both Prina—based between Los Angeles and Cambridge, where he teaches at Harvard— and this major installation, inspired by Schindler’s Los Angeles-based designs.