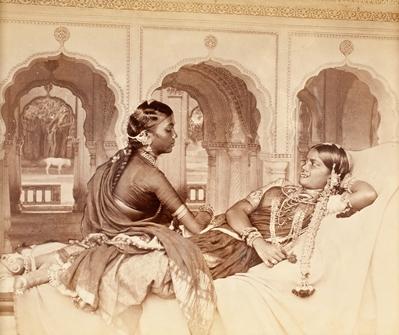 This Saturday at LACMA the Shakti Dance Company will offer a transcendental journey into the far reaches of Indian performing arts with the premiere of Devadasi: The Eternal Dancer. Choreographed by artistic director Viji Prakash and accompanied by an orchestra of nine musicians, this dance drama is a tribute to the women dancers of the temple whose art form is the basis for modern Bharata Natyam, a classical South Indian dance style. You can get a sneak peek at Prakash’s preparations in this video:

The production is inspired by a photograph in LACMA’s current exhibition Unveiling Femininity in Indian Painting and Photography. 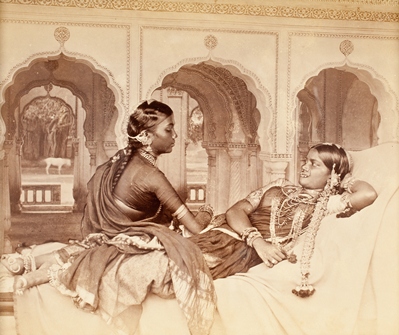 Literally, devadasi means “female servant of god.” A devadasi was dedicated to the temple and married to the deity. Skilled in dance and music, she performed stories of the gods before the temple deities. Trained in the arts of painting, sculpture, music, and composition, she was equally learned in Sanskrit and the Vedic scriptures. The devadasi tradition is more than 1,500 years old.

The devadasi was a harbinger of good fortune because of her auspicious role as the wife of God. She was called nityasumangali, the evergreen bride. The consort of the Immortal, she therefore never could be tainted by widowhood. Compared to the women of her day, the highly educated devadasi enjoyed riches, power, and an elevated status unconstrained by the duties of married life.

Within the temple the devadasi had specific roles in the performance of the sacred rituals. She also participated in festivals and processions. The innermost sanctums of the temple were open to her. Weddings, births, and royal court functions required her auspicious presence and blessing. For her services, gifts of gold and jewels were lavished upon her by patrons. She received land, fame, title and prestige. Many became wealthy landholders. In return she donated much of these riches to the building of temple structures and gardens, financing temple processions and to the construction and funding of schools. 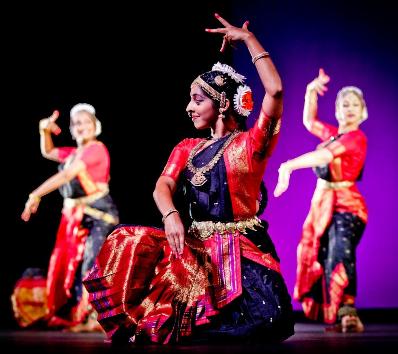 Quite commonly a prepubescent girl from the village would be dedicated to the deity as a devadasi. It was considered an act of supreme devotion. Others came from the ranks of the temple dancers themselves. The devadasi was permitted liaisons with men of proper status and her offspring found a place in society by becoming dancers and musicians in the temple. As long as dance was a hereditary profession the devadasi had a well-defined and important role in society.

In the last half of the nineteenth century this traditional role was threatened by a combination of forces. The British were robbing the royalty of their power and money, so they could no longer afford to support the local temples and be patrons of the arts. British missionaries also had issues with what they viewed as questionable behavior. Dance within a sacred space was seen as scandalous. The children of devadasis were considered illegitimate. The missionaries found it difficult to recognize these dancers as women of God. Their views converged with a national social reform movement that condemned the practice of dedicating young girls to the temples. For 65 years the argument was fought in official circles until the death knell was struck with the passage of the 1947 Madras Devadasi Prevention of Dedication Act. The devadasi era in the temples was drawing to a close 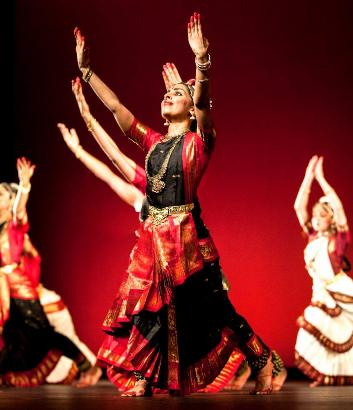 During this long debate, the devadasi was faced with a lack of support as patronage ebbed. The devadasi tradition went into a downward spiral taking with it the artists, musicians, sculptors, and scholars who were dependent upon it. The devadasi had to leave the temples and return to her ancestral villages with no means of support. She was without a defined role in a highly structured society.

Fortunately there was a group of revivalists who appreciated the wealth of material that these temple women possessed and took it upon themselves to save the dance tradition. Indians who were seeking a means of expression through western dance were encouraged by famous artists of the caliber of Anna Pavlova to delve into the rich dance tradition of their own country. Today we enjoy a dance tradition that has its roots in the 3000 year old text of the Natyashastra. It has not been lost. The performances have moved from the temple to a new audience in the theater, but the art of the devadasi will live eternally in the hearts of all those who love dance.