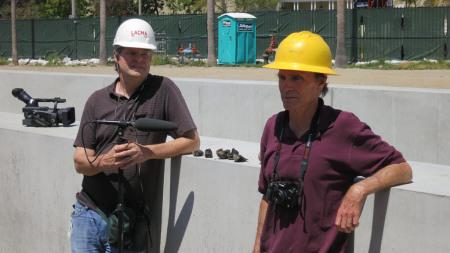 While it's hard to believe it has already been one year since Michael Heizer's Levitated Mass made its public debut at LACMA, it's impossible to forget the monolith's momentous trek from the Jurupa Valley to Miracle Mile in early 2012. As part of the 2013 Los Angeles Film Festival, LACMA debuts Doug Pray's documentary, Levitated Mass: The Story of Michael Heizer's Monolithic Sculpture, on Thursday, June 20, 2013. The film traces the boulder's famed journey from concept to completion: from the mountain of paperwork (almost as tall as the boulder itself!) required to plan such a colossal feat, to its custom-built transporter inching through the streets of Riverside and Los Angeles, to its final home here at the museum. LACMA's Erin Wright worked with Doug on the project and spoke with him about his experience filming Levitated Mass. 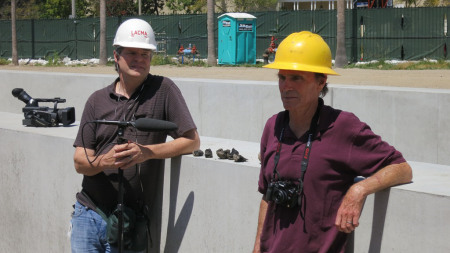 Erin Wright: How did you learn about Michael Heizer's plans for Levitated Mass at LACMA?

Doug Pray: Three years ago I got a phone call, out of the blue, from producer Jamie Patricof wondering if I was interested in filming the transport of a massive rock being moved through LA. He said that it was so big it might involve the removal of traffic signals and streetlights and would take many days to move from Riverside to LACMA.  Without any further information and no prior knowledge about the work of Michael Heizer, I told Jamie, "Yes."

EW: Why did it this project and artist interest you?

DP: At first, it was all about the rock. My father is a geologist, so I grew up running around in quarries, and I'm a big fan of boulders and natural structures of the Southwest. The mere idea of being able to film a two-story tall rock rolling by a Southern California drive-thru was enough of a visual juxtaposition to justify an entire documentary. But as I learned about Michael Heizer's past and future artwork, his intentions for Levitated Mass, and a bit about his "western maverick" character, the film gained momentum in my mind. As a filmmaker, I've always been drawn to people and subcultures that seem misunderstood by mainstream society, and Heizer seemed to fit that interest. A third component of the film that excited me was the basic, "Can they do it?" story about the physical challenges of the sculpture's construction and the inordinate bureaucratic and logistical hurdles that LACMA—along with the construction, engineering, and transport companies—had to overcome to make it happen. The whole enterprise, on some level, seemed so absurd to so many people, and it seemed the movie might be able to ask again the eternal question of "What is art?" in a large-scale, very public arena. All of these elements interested me, and I've tried to weave all of them together into the film.

EW: What was the most challenging aspect of making this film?

DP: Two facts made this a challenging project.  First, the rock wouldn't move when they said it would. For months on end, we were given legitimate starting dates for the boulder's transport, which had to be postponed at the last minute due to route permit issues from any one of the twenty-two cities it had to satisfy. This became a controversy itself and a great story within the film, but made it extremely difficult to plan the production. When it finally rolled, in late February of 2012, nobody could believe it.

The second challenge for me was the realization that Michael Heizer doesn't happen to be the kind of artist who likes to talk about his art or his past. More than anyone I've ever met, he lets his artwork speak for itself. In an age of non-stop media noise, I respect and admire this trait. But it was upsetting at first because every documentary filmmaker secretly hopes their subject will unleash, tell all, and provide the perfect narrative for their story as a free gift to their film. Heizer did, however, give us rare access to his process and thoughts during the making of Levitated Mass, and that forms an essential part of the film. Ultimately, I think it's a much stronger story, not being a standard biopic.

EW: There are so many interviews with the public that came to watch the boulder being moved.  How did you direct your camera crew in terms of the kinds of people they should talk to?

DP: We had to film the ten-night long transport with two crews. At night (from 8 pm to 5 am), I'd shoot the rock moving and interviews with people lining the streets, along with cinematographers Chris Chomyn and Edwin Stevens. By day, Erin Heidenreich and her crew would direct interviews in all the different neighborhoods along the 105-mile route where the rock was parked. Besides the workers involved with the process, Erin and I talked to all types of people along the way. The goal of our interviews was to highlight the impact this rock was having on them individually and as a region. From the Inland Empire, through the South Bay, and into urban Los Angeles, the responses we found were as diverse as the communities themselves.

EW:  What experience from making the film resonates with you the most?

DP: Like every documentary film journey, there have been many moments of victory and despair, all memorable. A few highlights: the first time I saw the rock at the quarry and realized it wasn't actually fifty stories tall but still loved its form and the fact that it would be one of the heaviest things ever moved by humans; the first time I was allowed to walk behind-the-scenes at a major art museum (not sure why, but that's just cool for an outsider); going out into the desert and experiencing Heizer's 1969 "Double Negative" sculpture and realizing how far he'd go to create a physical art experience; filming the moment Emmert International's boulder transport finally arrived at its destination in front of LACMA at 4:30 am with horns blaring and a huge celebration; and of course, meeting the artist Michael Heizer for the first time and realizing that everything about him and this project was different than what I'd expected going in. Just the way it should be.