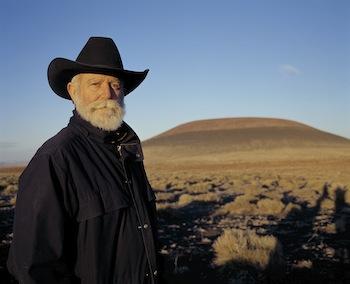 Inspired early in his career by such diverse architectural achievements as Buddhist stupas, Native American cliff dwellings, and ancient astronomical observatories, James Turrell sought to create a space in the landscape that would allow visitors to gaze at the sky without the aid of a telescope and experience some of his own insights into human perception.

In 1974 he was awarded a grant from the Guggenheim Foundation to fund this research. Having already created projection pieces and light works at the Mendota studio in Santa Monica, Turrell was poised to take his work in perception, light, and space into the natural landscape. The avid pilot began his search across the deserts of the American Southwest, looking for a land mass that he could transform into a naked-eye celestial observatory. “I did not want the work to be a mark upon nature,” he specified, “but I wanted the work to be enfolded in nature in such a way that light from the sun, moon and stars empowered the spaces.” 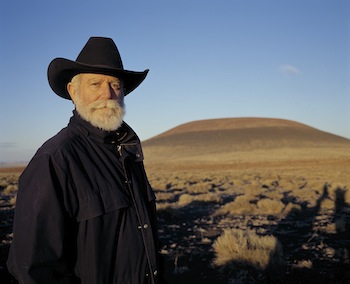 Roden Crater, which sits on the western edge of Arizona’s Painted Desert in a field of extinct volcanos, caught Turrell’s eye because its natural height and truncated cone shape were naturally suited to generating the experience of celestial vaulting: at certain elevations, when a person lies down and looks up, the sky can feel as though it is a dome curving down around the earth, or the horizon may appear to arc back up toward the heavens. He describes the impulse and the scale of his endeavor:

“Usually art is taken from nature by painting or photography and then brought back to culture through the museum. I wanted to bring cultural to the natural surround as if one was designing a garden or tending a landscape. I wanted an area where you had a sense of standing on the planet. I wanted an area of exposed geology like the Grand Canyon of the Painted Desert, where you could feel geologic time.”

The plan for the Roden Crater project (1974–present) consists of the construction of nine underground chambers and the crater’s bowl. In the words of Calvin Tomkins, the purpose of these spaces is “‘to capture and apprehend the light’ from the sun and the moon and the stars—and also to demonstrate how we create and form our perceptions of the visible world.” Turrell’s magnum opus, it is immense in scale, complexity, and budget, and is still a work in progress.

Currently inaccessible to the public, Roden Crater is represented in photography, site plans, prints, drawings, holograms, videos, and models. Roden Crater Model (Large Overall Site) is the single most important and original work representing the project. The enormous, exquisitely detailed model represents the wider geologic contours, textures, and colors of the site in relation to the exterior of his planned transformations; it is made from plaster as well as the cinder and raw earth from the crater itself. Built in 1985 with the help of architects Robert Mangurian, Mary-Ann Ray, and their architecture studio in Venice, it was first presented in his solo exhibition, James Turrell: Occluded Front, at the Museum of Contemporary Art, Los Angeles later that year. It has since been presented in numerous important solo exhibitions and publications, including James Turrell: A Retrospective at LACMA (on view through April 6, 2014). 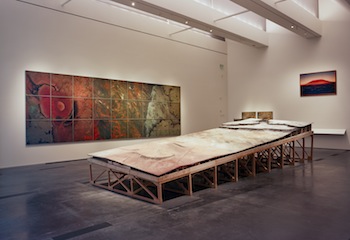 Roden Crater Model (Large Overall Site), is composed of twenty-seven three-by-three-foot sections that expose the port area in the notch in the lava beds west of the crater, Roden Wash and Roden Crater itself. Additionally, the layout of the various spaces at the port area and the crater, and the locations of the walkways and ramps are included. Ramped and situated on the original wood frame base, it is delicate but in good condition and a priority for LACMA’s conservation team to study, document, and maintain.

Considered one of the most important artists of the Southern California light and space movement of the 1960s who has achieved international renown, James Turrell’s art is a nexus for the worlds of art, science, architecture, astronomy, mathematics, archaeology, and spirituality. Roden Crater Model (Large Overall Site) is one of five other major works by Turrell in LACMA’s collection, starting with his very first projection piece, Afrum (White) to his latest Ganzfeld, Breathing Light, currently on view in the Resnick Pavilion. 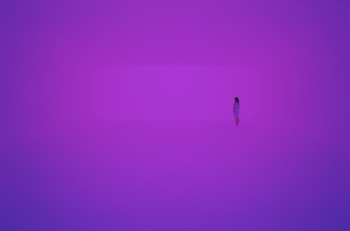 This summer, Turrell has concurrent exhibitions at LACMA, the Museum of Fine Arts, Houston (until September 22), and the Solomon R. Guggenheim Museum (until September 25). Please join the curators from all three exhibitions tomorrow, July 9, at 12 pm PST for a live Google Art Talk in which the life and work of James Turrell will be discussed.