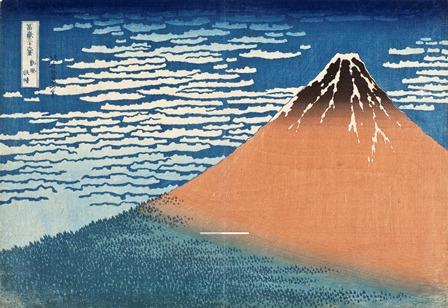 Katsushika Hokusai (1760–1849) is the Japanese artist best known in the Western world, primarily because of his iconic images known as The Great Wave and Red Fuji, both of which are in LACMA’s collection, and are on view now in Japanese Prints: Hokusai at LACMA. In Japan, Hokusai was the greatest printmaker and painter between 1800 and 1850. 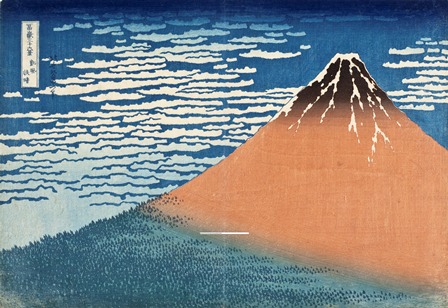 He was also a prodigiously productive artist: it is estimated that he created over 50,000 prints and paintings over his lifetime. Most of his best work was produced after he was 60; he lived until he was 88. He took the ukiyo-e woodblock print from its previous limited sphere of portraits of kabuki actors and courtesans into the world of landscape prints, some of which are considered the finest landscapes ever produced. He was eccentric: he changed his name more than thirty times over his life (helping us to date his works)—including taking on the name “old Man Mad about painting” later in life. Hokusai also changed his residence almost one hundred times. His work constantly evolved; he always considered himself an artist in training, striving to become ever more accomplished. 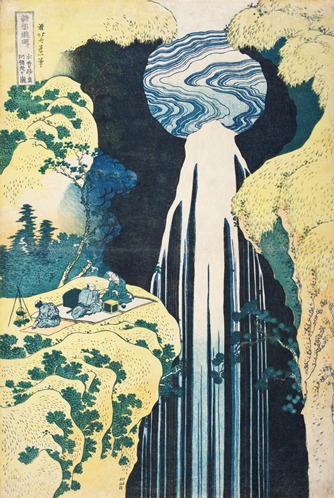 In 1833, as Hokusai completed the designs for his most famous work, the Thirty-six Views of Mt. Fuji, he approached the new topic of depicting water, in the legendary series known as A Tour of Waterfalls in the Provinces.

In the Shinto religion of Japan, nature gods and spirits (called kami) inhabit trees, rocks, mountains, and waterfalls. In his waterfall series, Hokusai portrayed each waterfall differently, emphasizing the unique features of each site. He was the first Japanese woodblock print artist to focus on water as a design, and here we see the genius of his visual imagination. 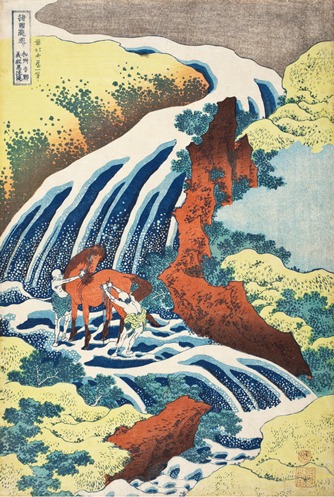 Although the Mt. Fuji series is better known, the Waterfalls series is considered Hokusai’s finest work in series form: each of the eight waterfall views is a masterpiece, and together they form an integrated whole greater than the sum of its parts. extraordinarily rare, LACMA’s recently acquired set—a gift of the late Max Palevsky—is one of a few complete sets in the world; indeed, only one other set even approaches the print quality and superb condition of the set presently on display.