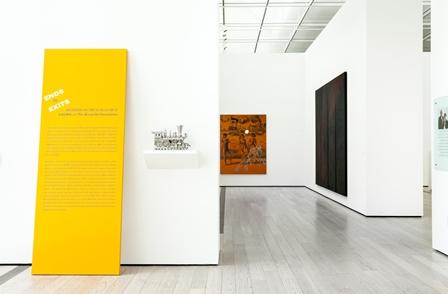 Ends and Exits: Back to the Future or Into the Past 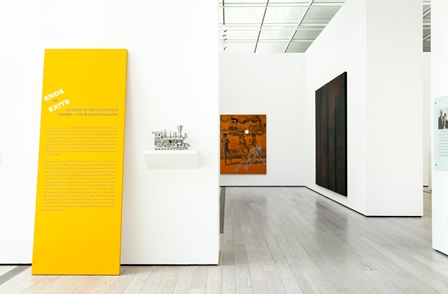 Some of us who lived through it felt its heart-racing immediacy, its “now” state, the emblematic shimmering static which at those moments of time lost a beat for an instant. Ensconced in the Chelsea Hotel at the time, for me, Ends and Exits felt refreshingly glamorous yet socially conscious—pop art with teeth. But for the young guards, I sense that it's "lost in translation"--the pretentiousness of the grandeur that may be odd or slightly misplaced, and some of the images totally misunderstood.  Perhaps pathetically, there is something about the present that is distressingly like the '80s but with a deeper imbalance. If this is the post-post-80s Zombie version of the '80s—and it may very well be—then this is the wrong conversation.

Actually, Ends and Exits is a reply to a previous generation’s dystopian reading of art and painting.  And though there were other prominent movements in the '80s, such as the id-infused Neo-Expressionists, these particular young artists, the picture generation, brought a clearer, sharper distinction to the vagaries of art and American popular culture. 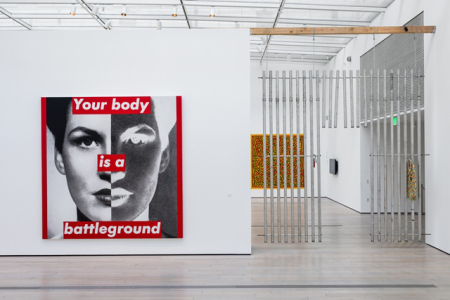 The picture generation was a time when art was about pictures not painting, and the wild child, or rather the chaotic symbol of change, gave it a voice. On the other hand, art was the cool kid: idealizing, romanticizing, connecting the dots, and constructed as if in the asymmetrical rhythms of an earthy streetwise hip hop beat.  Draped under the spell of Warhol’s Voodoo wisdom, where everyone seemed eager for their 15 minutes, the culture was best understood through the vision of many of the artists present in this exhibition. It was artist as wizard or cultural soothsayer with its small, elegant charms and white magic, but, most importantly, its cultural hipness. The '80s would prove that self-consciousness would not hinder belief in the consumer’s haunting dream. The item became the icon, the icon the item. 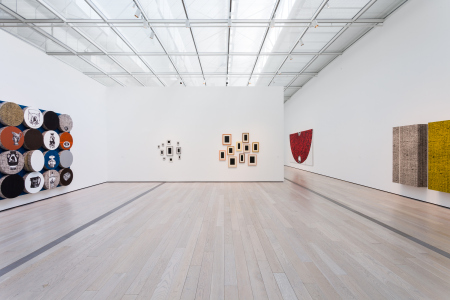 Ends and Exits provides a portal into the future for some and into the past for others.  Richard Prince, Jeff Koons, and Robert Gober encapsulated America’s self-made object lust of cars, trains, and sculptural puns that went the distance to exemplify the craft of the artists and their absurdist visions. Here, fabrication from LEDs to the kitchen sink morphed into comment and questions of ambiguity on the original, and one sees the ironist humor of Meyer Vaisman’s work and Han Haacke’s political 3D irony, unflinchingly literal. Sherrie Levine’s appropriation gestures made the Duchamp Pandora’s box an art available to its own self-importance, “ideas and media as indirect irony of the personal.”

Suddenly art had this huge political face with Jenny Holzer revealing the utter power of light and word as witty euphemistic truism writ large or engraved in stone. Or the powerful Barbara Kruger graphic consumer lust, sin and feminism supersized, with lettering the height of the wall as declared confrontation. Race and its political weight were symbols found in Dung, and numbers in the imagery of Lorna Simpson and David Hammons, like some stealth current rising to the top of a visible swamp of denial. Jonathan Borofsky’s painted male made horrors with gritty realism that raises the gender role starkly. 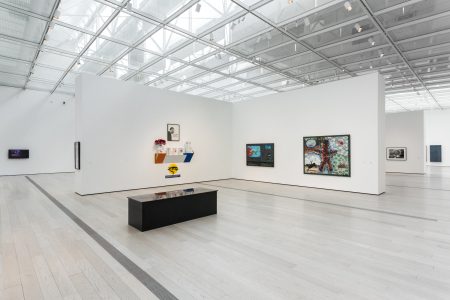 Along the way, the sheer seduction of glamour where Sarah Charlesworth’s faceless images would find fixation, or as Louise Lawler’s photo documents lush settings, and a scene possibly for Lorraine O’ Grady’s kid glove gown as the living sculpture to a strange passion. While the consumer’s techniques for the use of a product are mockingly manipulated to place art’s multiples in aesthetic subversion, Allan McCollum plays an old game against expectation in his “Surrogates” works. The '80s would be an irony binge in ecstatic expression of social awareness of the profound ambiguities that lie within the American Dream. Maybe it is just that Keith Haring’s almost mystical graffiti street art passionately braved a path of the new aesthetic. Perhaps as my remarks began so shall they end, as with rap lyrics toward the end of the 80s:

Public Enemy: “ You gotta go for what you know/ Make everybody see, in order to fight the powers that be/lemme hear you say…/ Fight the Power”