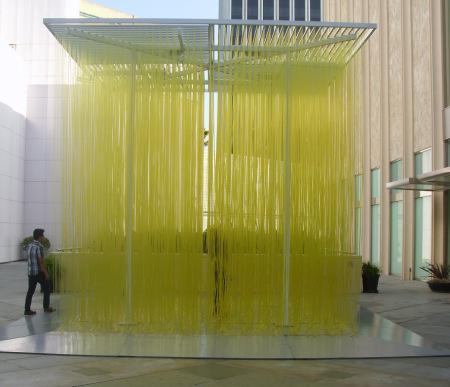 In the 1950s and 1960s, several Latin American artists settled in Paris, where they became key players in the movement of kinetic and op art. One such artist was the Venezuelan Jesús Rafael Soto, whose projects directly engaged the viewers’ participation. This is the case of Penetrable, a long-term loan from the Colección Patricia Phelps de Cisneros, installed on LACMA’s plaza. 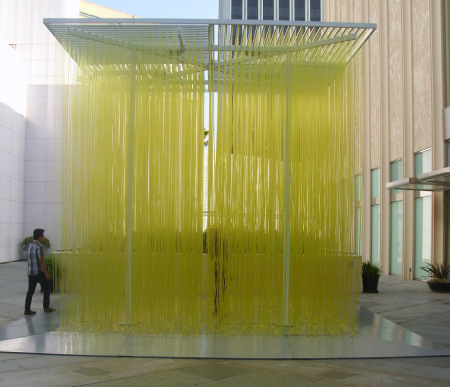 As the work’s title implies, the architecturally scaled structure is intended to be pierced both optically and physically by the viewer. This interactive aspect sets it apart from many works presented within museum settings, in which objects are not meant to be touched. The piece is made of basic industrial materials, the bulk of it comprised of yellow plastic hoses that are suspended from a simple steel grid. 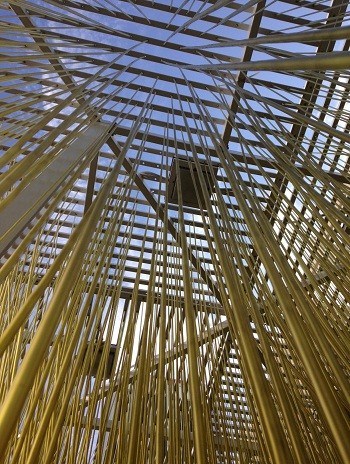 When viewers walk through the dense curtain of plastic tubes, they disappear into them and become part of the work. Soto was profoundly interested in the dematerializing effect of light, which he sought to recreate through such works. In the artist’s words “[the] man is no longer here and the world there, he is inside the fullness and it’s this fullness that I want to make people feel.” 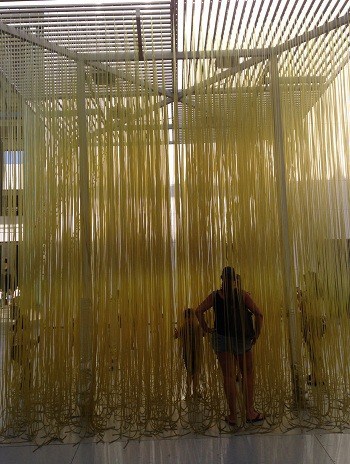 Although Soto’s work is conceived as a geometric sculpture, it lacks a solid surface or plane; its shape is easily altered by human contact, or even natural elements such as wind and rain. In other words, it is a work in constant flux. This playful and profoundly sensorial aspect of Soto’s Penetrable has made it one of the most popular works in the museum—an object that invites the viewer to become one with the work of art.