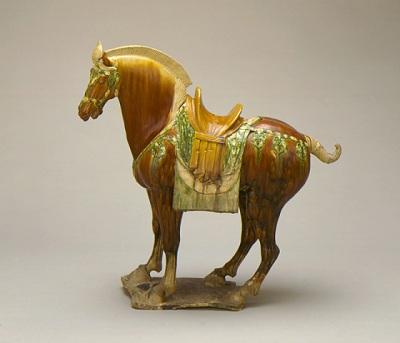 I am in constant wonder of the Tang horse. It sits in the middle of the Chinese art gallery, its glistening glaze somehow indicative of motion. The caramel color of the form runs over, like rain streaking the muscular frame and darkening to an almost black, rendering the hooves a pale clay color. The harness, bridle, and saddle are blotched green and pale clay, melting as it were, as if the steed was merely a manifestation of paradise, a vision in an afterlife. 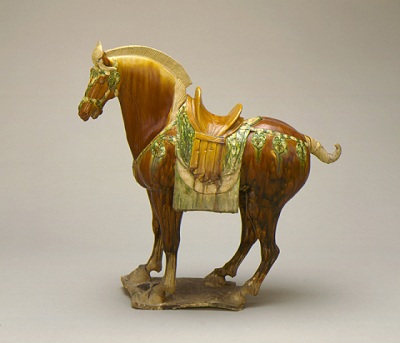 The Tang horse is halted in an apparent stride with the invisible reins bringing the head to one side as the animal regally leans on its hindquarter. The object is uncanny in how it appears so contemporary. Yet, it was very much the treasure of another existence.

Throughout Chinese history, the horse was a sacred animal. Equines rose to great prominence during the Tang dynasty (619–907), often considered the golden age of Chinese art and literature. Emperor Taizong, who unified China, was considered one the greatest rulers in Chinese history and was praised for his economic systems and military prowess. One of the primary reasons for the horse’s prominence was the fact that equines were a key factor in Taizong’s military tactics. Taizong would accrue, at one time, about 700,000 horses. Indeed, far more than metaphoric resonance, the horse communicated the imperial power and moral authority of the empire.

Much to my amazement, in Chinese lore and mythology, the horse conjures the dragon, the supreme symbol of imperialism. Horses often served as earthly avatars for the dragon. In Power and Virtue, Robert E. Harrist, Jr., an art historian specializing in Chinese works, writes, "When Taizong was born, two dragons appear often, seen outside the birth chamber, where they lingered for three days."

This horse is a work by Han Gan. . . .
And Longwen’s long body.
White flesh like snow,
And Orchid veins tense like the wind.
A gait untrammeled,
And movement without restraint.
Four hooves ringing like thunder and hailstones—
Covering heaven and earth in a single day . . .
Look at its thoroughbred bones:
Truly, it is one of the dragon herd.