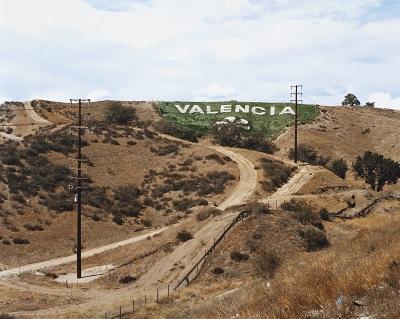 The View from the Suburbs

In his diaristic essay “A Tour of the Monuments of Passaic, New Jersey,” Robert Smithson described his first impressions of the suburban landscape, after an excursion in 1967: “Noon-day sunshine cinema-ized the site, turning [it] into an over-exposed picture. Photographing it with my Instamatic 400 was like photographing a photograph.”

For Smithson, a tour of the suburban New Jersey community resulted in an unsettling dissolution of the divide between reality and representation. The environment seemed to beg to be photographed, or, perhaps more accurately, appeared already to be a photographically and cinematically staged. Less than 20 miles outside of the reliable chaos of New York City, was this new landscape an opening onto nature, or was it something altogether artificial, even illusory? 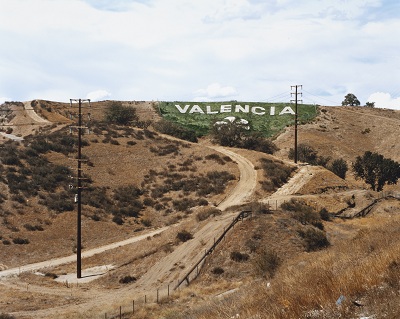 The tension between the wild and the contained—the natural and the artificial—is a defining subject of much of the photography that has focused on the suburbs. Take, as an intriguing example, a work from Catherine Opie’s series The Master Plan, produced while she was a graduate student at CalArts in the mid-1980s (currently on display at LACMA as part of the selection of works Little Boxes: Photography and the Suburbs). The image shows a verdant patch of grass with the name Valencia garishly painted across it, stretched incongruously atop a sun-scorched hill. The rigid lines dividing the landscape from civilization marks where nature ends and the suburbs begin. Opie found in her immediate surroundings—the community around CalArts—an environment characterized by the push-pull of vast western landscapes and encroaching residential sprawl. Of these early works, Opie wrote that they reflected a fascination with “the absurdities of the West and its development . . . [one] can’t help but image it over and over again.” Like Smithson, Opie recognizes how the suburbs seem to invite an almost compulsive desire to photograph. 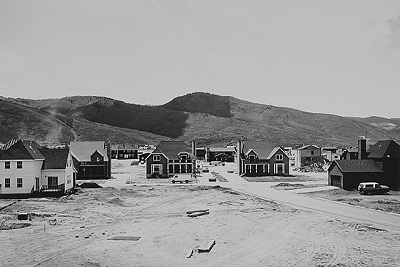 Opie acknowledges her indebtedness to the generation of photographers identified with the New Topographics exhibition that originated at George Eastman House in 1975, and which was the subject of a 2010 restaging at LACMA. Artists such as Lewis Baltz, Joe Deal, and Robert Adams turned their cameras to the changing face of the American West, offering a radical renegotiation of landscape photography. These photographers focused on the conflict between the expanses of nature and the structured angularity of suburban encroachment. For Baltz, suburban architecture was “the most prominent and enduring material artifact produced by the dialectic of nature and culture.” His deadpan photographs of subdivisions and industrial parks offer unflinching views into the effects of the suburbs on the landscape. They also reveal how the growth of the suburbs reconfigured the very foundations of landscape photography. 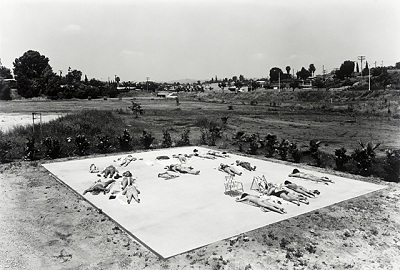 Such photographs expose the central paradox of the suburbs: the promise of a return to nature through the fabrication of artificial landscapes. This tension plays itself out in the work of photographers who emerged in the late 1970s, as part of the so-called Pictures Generation, who, with a dose of postmodern irony, created artificial worlds to comment on the manufactured character of everyday life. Artists such as Laurie Simmons, Eileen Cowin, and, later, Gregory Crewdson made the tension between the real and the artificial the subject of their work. The staged nature of the domestic experience—the cinematic qualities of daily life—emerged as key themes in the work of these artists. Crewdson’s Untitled (1991), shows a view into the backyard of a typical suburban home, constructed as a cinematic backdrop. Beneath the synthetic lawn, and underneath prosthetic flowers, a dead bird festers—a surrealistic commentary on what lies beneath the surface of suburban tranquility. 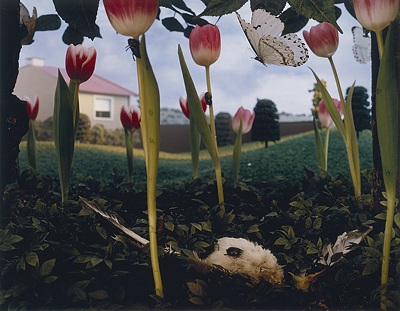 Such images reveal—as Smithson suggested in his essay—that cinema and the suburbs rely upon the same illusion: the manufactured recreation of the natural world. Despite this logical affinity, film and television have been remarkably unkind to the suburbs. Shortly after the postwar explosion in suburban development, filmmakers of all stripes took aim at the social problems endemic to the communities sprawling from city centers. From Douglas Sirk’s All That Heaven Allows (1955) and Joseph Sarno’s influential sexploitation Sin in the Suburbs (1964) to the punk-revolt of Penelope Spheeris’s Suburbia (1983) and Richard Linklater’s grunge manifesto of the same name (1996) to Tim Burton’s Edward Scissorhands (1990) and to the indelible opening sequence of the television show Weeds (2005), set to Malvina Reynolds’s “Little Boxes,” the soul-crushing conformity of the suburbs has been a favorite punching bag of film—mainstream and underground alike. Perhaps Linklater was most direct—his film opens to the Gene Pitney song “Town without Pity” played over a broad sweeping pan of a seemingly endless repetition of bland structures, shot in a way that echoes the flat deadpan of the New Topographics photographers of a generation prior.

As scholars and demographers call for “The End of the Suburbs,” it is useful to look back at what artists and filmmakers have had to say about the American affinity for the single family home. The transformed landscape—the way the suburbs have recreated our image of nature, as well as how artists have imaged nature—is an ongoing process, one that seems very much bound up with processes of recording and documenting. 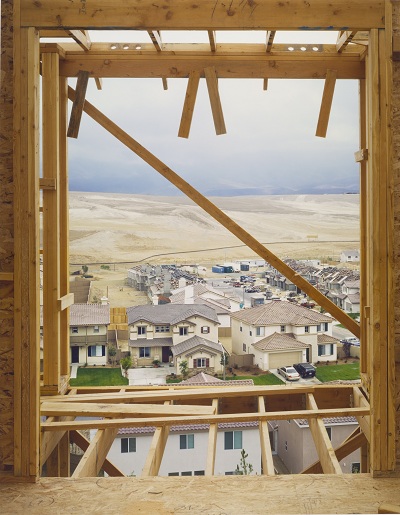 To return to Smithson, and his tour through Passaic, New Jersey, we once again land on a question of cinematic and photographic vision. Describing how he might use a camera to undo the ruin of the suburbs, he suggests, “Cinema offers an illusive or temporary escape from physical dissolution. The false immortality of the film gives the viewer an illusion of control over eternity.” With this enigmatic note, Smithson ends his essay. The feeling of control over nature offered by film and photography is, Smithson contends, only an illusion. The same can be said of the suburbs.