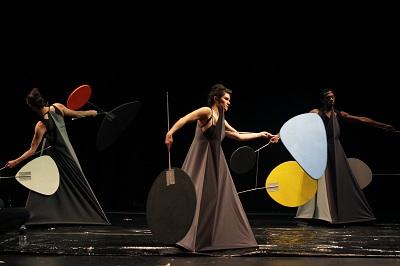 Weight Watchers: The Myth of Man vs. Machine

Richard Serra’s Inverted House of Cards (1969) has been installed only once at LACMA, and it will be on display for only four hours on Saturday, October 19, as part of Liz Glynn’s The Myth of Man vs. Machine.

The installation and de-installation of this sculpture presents many challenges not because of its size or weight, but for its simple logic: four massive plates of steel are set to lean against each other, locking together only by their own weight and the effects of gravity. Installers have to position and hold the plates in place and, at a given moment, release them to let the weight act out its power. Timing, precision, and a feeling of the material are crucial to install the sculpture. Cranes or heavy lifting machinery, often used to install other monumental Serra sculptures such as Band (2006), on display at the ground floor of the Broad Contemporary Art Museum (BCAM), cannot help or ameliorate the work of the installers.

At a certain point of the research for this performance, we considered asking the crew to install the Serra piece in front of the public. It was Jeff Haskin, the lead installer, who warned us that the presence of an audience could be distracting for the installers. “This is like NASCAR. Not every one goes to see the cars running, some just go to see them crash.”  Then he added importantly: “We are not performance artists.” These assertions served as an outright reminder of the focus of Glynn’s project. 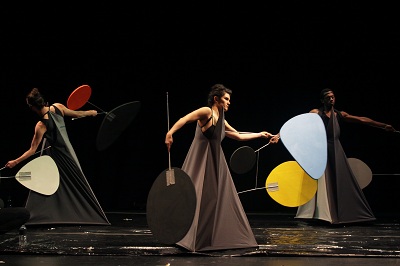 Liz Glynn's performance of The Myth of Getting It Right the First Time at LACMA in April 2013. The piece featured a response to Alexander Calder's outdoor sculpture at the museum.

For The Myth of Man vs. Machine, the performance has been structured in two parts. The first one entails the installation of Inverted House of Cards in BCAM, two floors above Band. For the second part, a truck containing sand matching the weight of one of ten sections of Band will be parked near BCAM. The public is invited to participate by carrying sandbags to the third floor and placing them in a gallery adjacent to Inverted House of Cards. Bags will be filled with whatever amount of sand each participant chooses to carry. 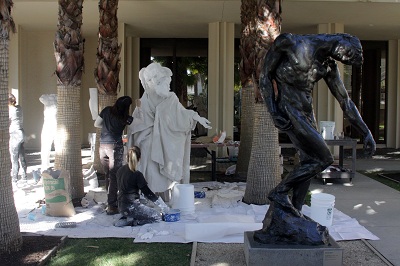 Liz Glynn's performance of The Myth of Singularity at LACMA in January 2013. The piece was based on a work by Auguste Rodin at the museum.

The Myth of Man vs. Machine is the third performance of the cycle [de]-lusions of Grandeur, a five-part project in which Glynn considers the process of creating, moving, and erecting large-scale sculptures and the frequently Herculean human efforts necessary to do so. The project centers on works from LACMA’s collection and the relationship between human scale and monumental form. The first two performances of this cycle centered on works by August Rodin, The Myth of Singularity (January 2013) and Alexander Calder, The Myth of Getting It Right the First Time (April 2013). The last two performances will take place on December 14, 2013, and January 18, 2014.