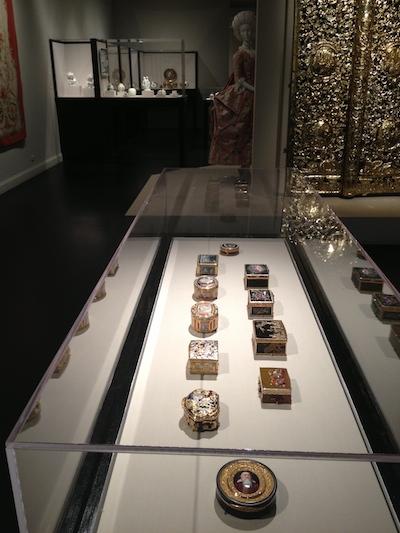 In the Palm of Your Hand: A New Display of Gold Boxes in the Koenig Gallery

Is your smartphone decked out in polka dots or does it showcase your favorite team? For hundreds of years customized accessories have been conversation starters. This much is apparent from a new display of 11 precious gold boxes dating from the late 17th to the early 19th centuries at LACMA (Ahmanson Building, third floor), on loan from The Rosalinde and Arthur Gilbert Collection at the Victoria and Albert Museum in London and from The Marjorie W. Gilbert 2001 Trust in Los Angeles. 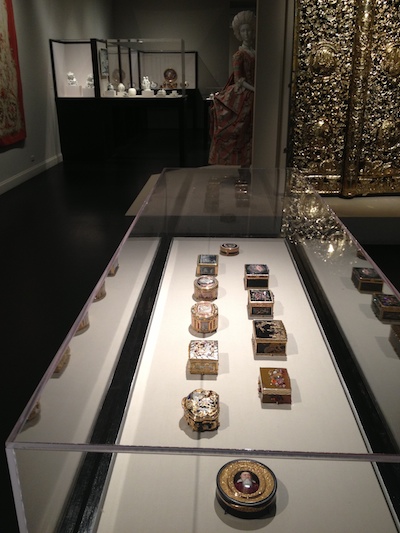 The new display on the third floor of the Ahmanson Building.

The snuffbox, or tabatière (as it was called in Paris, where many of the best boxes were made), was perhaps the most important status symbol of its day. These captivating objects provide a fascinating point of comparison with the contemporary world. 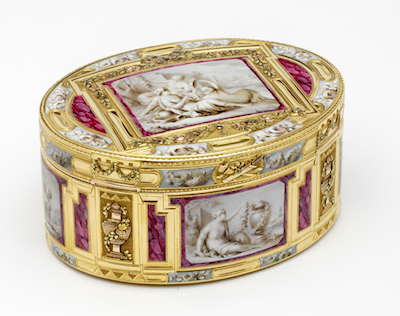 Jean Frémin (gold box) and Claude Bornet (enamel), Snuffbox with Putti and Nymphs, France, 1768–69, long-term loan from The Rosalinde and Arthur Gilbert Collection on loan to the Victoria and Albert Museum, London

While our 18th-century counterparts could not have imagined the capabilities of our portable devices, we on the other hand marvel at the precision and craftsmanship of their paraphernalia. Often small enough to fit in the palm of the hand, gold boxes required a lid that closed tightly enough to keep the contents (usually tobacco) fresh, but the closure also had to be smooth enough to be opened gently and easily with the utmost refinement. Etiquette dictated the precise and proper gestures for taking out your snuffbox, opening the lid, and offering the contents around before taking a pinch yourself. The rituals varied in different countries at different dates, and depended on how well those involved knew one another. Charles Alexander of Lorraine (1712–1780), Governor-General of the Austrian Netherlands, recorded in his diary the following formula he used with associates to indicate there was a note to pass on: shake the snuff from your fingers before closing the box, then blow several times. Then as now, the level of discretion no doubt dictated the subtlety with which the signal was given. 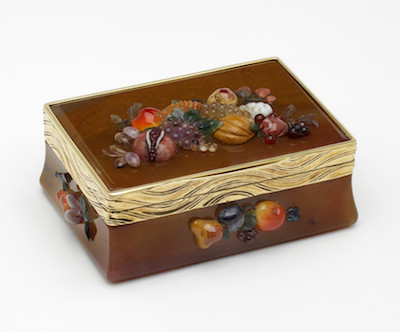 Snuffbox with Clusters of Fruit, Germany, c. 1760, long-term loan from The Rosalinde and Arthur Gilbert Collection on loan to the Victoria and Albert Museum, London

Both men and women took snuff in the 18th century, making snuffboxes as gender neutral and universal as cell phones are today. No fashionable person would be seen without a snuffbox. While boxes undoubtedly revealed things about their owners, it is dangerous to infer (just from the appearance of a box) who they belonged to. The famous collection of Frederick II of Prussia (1712–1786), known as Frederick the Great, is one of several of the era that amounted to more than 300 boxes. These included examples decorated with sprays of flowers carved from beautiful semiprecious stones and easy to mistake for a lady’s snuffbox (if modern stereotypes about feminine patterns go unchecked). The same decorative technique is used on the honey-colored agate box covered in clusters of finely carved fruit made from a mouth-watering array of hard stones. We do not know who this box was made for, so do not leap to any conclusions. Looks can be deceiving. 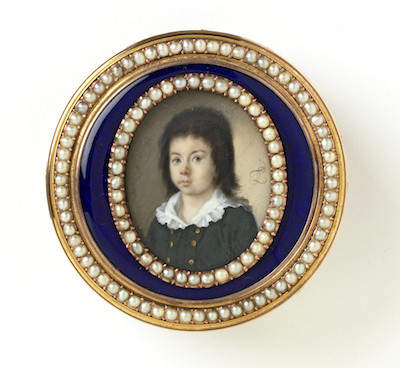 Pierre-Claude Pottier (box) and Leonardus Temminck (portrait), Bonbonniere with Portrait of a Boy, France (box) and the Netherlands (portrait), 1787, long-term loan from The Rosalinde and Arthur Gilbert Collection on loan to the Victoria and Albert Museum, London

We suspect a loved one commissioned the innocent face of a little boy with wild dark hair. The monogram “LT” to the right of the figure indicates that it was painted by the artist Leonardus Temminck. However, there is no evidence of the boy’s name. We know when the box was made, because it is marked, and we know when the miniature was painted, because of the style of the clothing, but we do not know why the miniature was set into a box that was already 20 years old at the time the portrait was painted.

By contrast, the other circular box in the display is set with a portrait miniature of a well-known individual. It is possible it was part of a collection of portrait miniatures of famous men. It is also the sort of thing that could have been sent to a patron, either to commend or recommend the sitter. However, while monarchs gave many portrait miniatures of themselves to loyal subjects as political propaganda, each miniature was painstakingly created by hand, and was therefore nowhere near as commonplace as a headshot or calling card. 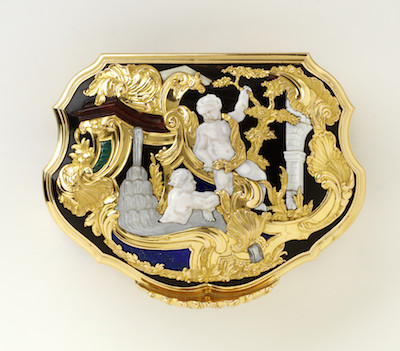 Snuffbox with Putti at a Fountain, Germany, c.1750, long-term loan from The Rosalinde and Arthur Gilbert Collection on loan to the Victoria and Albert Museum, London

Sending a portrait miniature to a prospective patron in the 18th century was one thing. Transporting precious museum objects from London to Los Angeles in 2013 is quite another. Frederick the Great had his carried by camel whenever he moved from one residence to another. Perhaps the idea was that their soft tread was safer for fragile items than that of pack animals with hooves? Needless to say, the mode of transport arranged by the registrars and curators at LACMA and the V&A for the loans from London was more modern but equally attentive to the safety of such delicate cargo. We hope you enjoy these “new” arrivals.