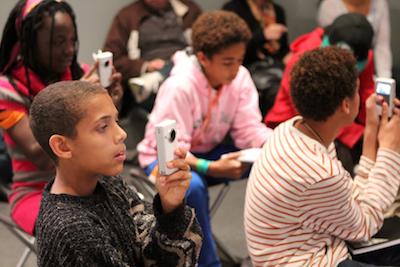 What’s in your closet? That’s the question we posed to 12 middle-school students from Santa Monica Alternative School House (SMASH). Out of their closets, and into LACMA’s, came hand-painted sneakers, black-sequined shorts, red feather earrings, and basketball socks—typical yet treasured wear for these So-Cal tweens.

What began as an exercise to help middle schoolers make personal connections to LACMA’s collection became a fascinating and delightful discovery of the links, in turn, that LACMA costume and textiles department curators Sharon Takeda, Kaye Spilker, and Clarissa Esguerra were able to make to the SMASH kids’ own choices of clothing. With each trip to the LACMA closet, out came a related museum object for the students to study. The red feather earrings prompted Spilker to pull out a plumed headdress dating from about 1400 from Peru, made of bright yellow parrot feathers, while a boy’s Velcro sneakers inspired Esguerra to produce a pair of white leather André Courrèges gogo boots from France,  dating from about 1965. She explained that Velcro was discovered in 1940 by a Swiss man who, walking in the woods with his dog, realized that the way burrs clung to his dog’s fur could be used to attach fabrics together. Another boy’s pair of white athletic socks spurred Esguerra to show the students a carefully preserved pair of European silk stockings from the early 1700s, intricately embroidered with metallic thread. With each item, a story unfolded to reveal the history, function, value, and even impracticality of the objects. 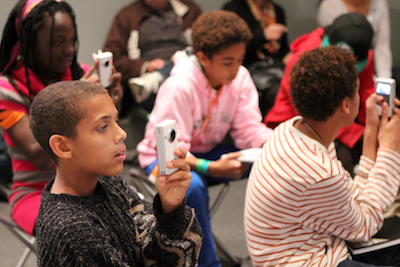 Students document and record their behind-the-scenes session with curators.

Why the exercise? The SMASH students were part of a focus group that the education department assembled to help develop a new project made possible by a generous grant from the John B. and Nelly Llanos Kilroy Foundation. The Kilroy Foundation has already funded a family guide and a series of art workshops and bilingual tours, and the new funds are allowing us to design programs for children and families that highlight LACMA’s costume and textiles collection. 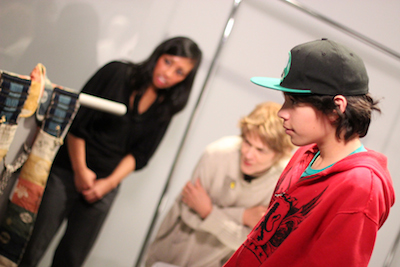 Anthony gets a closer look at a Samurai campaign surcoat (Jinbaori).

LACMA staff—and the SMASH kids, using flip cameras—documented the show-and-tell session. Clearly, our focus group had become more than a quick foray into the minds of middle schoolers. Teachers and administrators at SMASH became interested in the project, and partnered with Marni Gittleman, an independent consultant and arts educator, to design an entire course at SMASH inspired by this exploration. The course asked students to imagine a world without clothes (you can imagine the giggles), to think about why textiles exist, and to consider what makes fashion an interesting art form. The students’ process of discovery in our original 12-person focus group ended up not only informing the project, but spawning a whole new dimension. 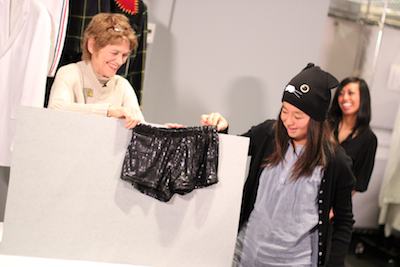 Kanoa shows off her glittery (but itchy) sequin shorts.

The footage of the discovery process culminated in Closet to Collection, the first of three Kilroy Foundation–funded videos that, through YouTube and other avenues, will make LACMA’s costume and textiles collection accessible to a wider audience. Check it out on LACMA’s website to discover how your closet may be connected to ours.